Greetings my fellow managers and welcome to Fantasy Sports Island. I hope this past week went extremely well for you guys and that you’re catching up to the top spot of your league. I myself went 2-0 on the week edging out my boss in my categories league 5-4 and slaughtering my opponent in my points league as the only team to break 1,000 this week.

I personally have to give a big shout out to James Harden who fueled my 1,141-891 victory, scoring 113.5 points in just three games. As well as Mr. Alphabet Soup, Giannis Antentokounmpo. The man reeled me in 126.5 points in his four games, and for that, I thank the Greek Freak with a preview of what you guys may see this weekend from the young Buck.

I’m glad you all decided to visit The Island this week as you’re just in time for this weekend’s incredible event, All-Star Weekend. Although a weekend full of the best of the best is always fun to see, it puts a damper and a constraint on the world of Fantasy! Your players will have 2 games at most and some will only have one. That means your lineup has to be perfect because your week will be over on Wednesday unless you have a Cav or a Bull, who play the only game on Thursday.

Luckily for you guys, you shouldn’t have to make many decisions as your whole lineup should be able to fit in this week and you definitely want to make sure that everyone plays every game that they have. Sometimes I wish we could just put an asterisk on this week, but we can’t and unfortunately some of you could end up dropping a 2-7 loss on yourself. Let’s make sure you’re on the right end of that score with this week’s edition.

A Change of Staph

Yesterday, Blake Griffin underwent elbow surgery to have a staph infection removed and will miss a few more weeks minimally. If you have Blake Griffin, you’re in as much trouble as the Clippers are right now, but there is a little upside to what this has opened up. The offensive threat known as Spencer Hawes has finally gotten his feet underneath him, just in time to fill a starting position. So far as a replacement, he has gotten around 35 minutes a game and adds a good bit of scoring and threes to any team. Blocks get a little attention too but do not expect any rebounding. Yesterday Spence was owned in just 49 percent of Yahoo! leagues, and in my most recent check, that had moved up to 81 percent so be quick.

The trade sending Timofey to a needy Cavaliers team did more than just ignite Lebron’s new old team. It also made way for rookie Jusuf Nurkic to take on a role that this struggling program, led by our beloved Gaucho, was in dire need of. He can give you consistent scoring around double digits and the blocks and boards are plentiful as well. Only owned in 27 percent of leagues right now, but Shaw knows numbers speak for themselves.

He’s back! Or is he? Rubio returned from his early season injury but didn’t play Sunday and was extremely limited Monday. In his three games back he averaged 11.7 points, 6 dimes, 3.7 boards, and 1.7 steals and for once in his life shot decently from the field. Now in seeing his two nights off, it is left to wonder about the future but he should be playing this week in their last game before the break.

I apologize for my lack of title creativity. Robin Lopez apologizes to Kaman who has played phenomenally in Rolo’s absence and now is sent back to the bench to hibernate. 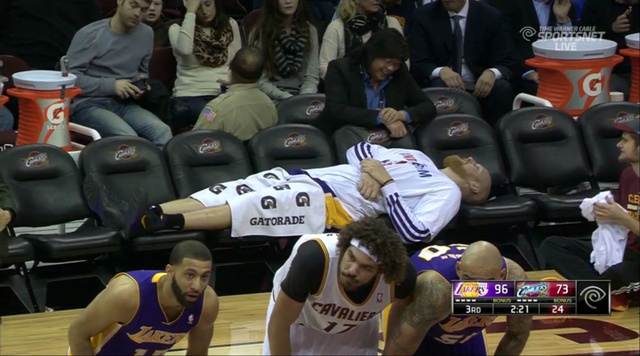 But this is rightfully so as the curly haired twin provides a necessary force for his blazers team and he can for your team as well. In his four games back he has averaged about 12 points, 5 boards, and a little less than 2 blocks as well. Currently owned in 75 percent of leagues so a quarter of you have a chance still.

Kemba Walker’s injury left this team in question of would provide points. Gerald Henderson has been making a case for himself lately scoring at least 17 points in four of his last six games, including a 27 point performance over the Wizards. Along with that he has provided high assists and board numbers, flirting with triple-doubles in recent contests. Currently owned in just 27 percent of leagues.

The three L’s of the New York Knicks are starting to split up in talent. Langston Galloway may be the only one of this trio that you want on your team drawing full sat sheets and staying consistent while Lou and Lance have fell off. Lou can’t get any minutes fouling everybody and Lance is only good for 10 points and turnovers. Choose wisely, it’s not too hard.

That’s gonna do it for me this week Fantasy Fans, I hope this helps in our very short week here and I wish you the best of luck. If you have questions or comments, you know where to find me. @TheRealMoebus