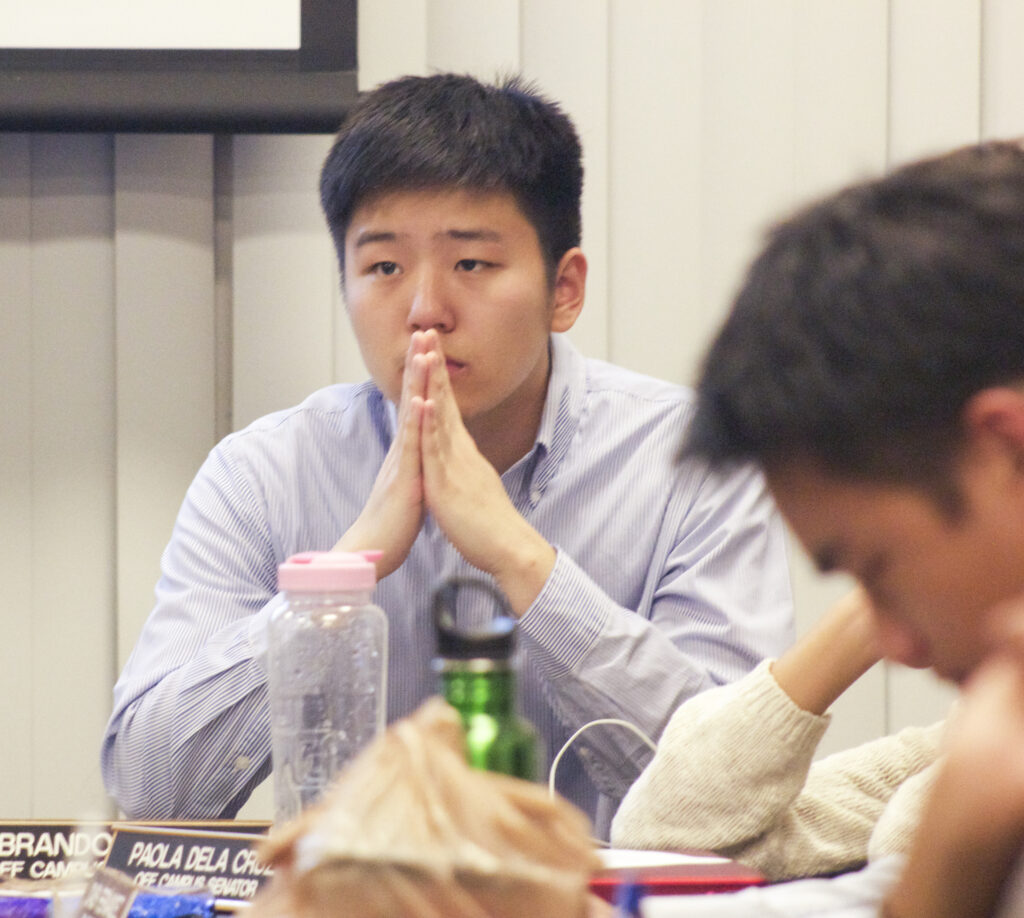 Off-Campus Senator Brandon Lee listens as different topics are presented, such as the proposal to update the campus recycling bins. Brendan Mansfield/Daily Nexus

“What they want to do is reduce financial aid packages for students who waive Gaucho Health Insurance. Currently around 50 percent of students waive Gaucho health insurance,” said Lau. “However they don’t account for the fact that currently, to be a student at UCSB you are required to have health insurance.”

According to Lau, the Student Health Board’s new plan will financially hurt students, many of whom struggle to pay for tuition and school expenses already.

Later in the meeting Senator Zach Goulhiane of the UCen Governance Board reported that changes are being made to the campus mail system so that first-year students living in the Santa Catalina dorms will have to collect their mail at the UCen post office.

“They’re planning on spending $93,000 to re-do pretty much all the P.O. boxes for the freshmen so all the FT mailboxes, all the University-owned mailboxes will be moved here [the UCen],” Goulhiane said.

According to Goulhaine, the move is directed to increase foot traffic around UCen businesses and to simplify mail distribution.

“They’re trying to get more traffic into the UCen so that more people will go around the bookstore and whatnot buying stuff here,” Goulhiane said, “And that way they centralize all the mail because now apparently it takes them a while to send it out.”

“They [bins] were installed about 20 years ago. They currently say ‘newspapers, aluminum, plastic,’ and ‘glass’ as well as ‘trash,’” Breyfogle said. “We’d like to get signs that say ‘comingled recycling’ and underneath that a sign that lists out what can be recycled.”

Breyfogle also said the organization wants to upgrade the BigBelly trashcans on campus.

“We’d like to buy new bins for the interiors of the berthas,” Breyfogle said, “Many of the bins have holes bit through by rodents causing them to leak and make a complete mess of the interior.”

Khazaieli explained that the goal is to make iClickers free for students to rent, but there will be a suggested $5 donation upon returning the iClicker to keep the program sustainable.

“Based off our research, students are highly inclined if not really ecstatic to provide up to $5 to the association for providing such a service if it meant that that money was going to go to expanding such a service,” Khazaieli said.

Khazaieli addressed the specific concern of the $7 re-registration fee for students on used iClickers and suggested that donations generated from the $5 program could reduce the fee. Khazaieli also suggested potentially “striking a deal” with iClicker to get reduced rates.

A.S. will be holding a finance meeting on Monday to “secure funding for the program,” according to Khazaieli.

“If revenues are generated from the iClicker program … that money can go towards subsidizing this,” Khazaieli said.

The meeting concluded with senators passing two resolutions in support of a tuition hike op-ed and a BigBelly label and bin upgrade.

A version of this story appeared on page 6 of the February 5, 2015 print edition of the Daily Nexus.

Note that the correct spelling is i>clicker, not “iClicker” (it’s not an Apple product). The “i” stands for the University of Illinois, where the system was originally developed by members of that university’s Department of Physics. See https://www1.iclicker.com/

Also, to add to Prof. Freeman’s correction, we stated that the $5 opt in would go towards expanding the i>Clicker rental -pilot- program into an all inclusive AS Tech Rental program.

The details of this Tech Rental program are being forged as we speak, and UCSB students can participate in this process here

The i>clicker rental program sounds like a fantastic idea!! Two questions: 1. Where are students being asked to pay a $7 fee to register their i>clickers? Most instructors are now using the new version of i>clicker that is integrated with GauchoSpace and students register (for free) on the GauchoSpace site. Even for those instructors who are using an older version of the software and asking students to register on iclicker.com, I cannot find any place where students are asked to pay a registration fee. I would like to find out so that I can help students avoid paying this fee.… Read more »

Has this i>clicker rental program started for the Spring 2015 quarter?