The Daily Nexus
News
Professor Speaks on State of American Education
February 5, 2015 at 5:00 am by Erica Loera 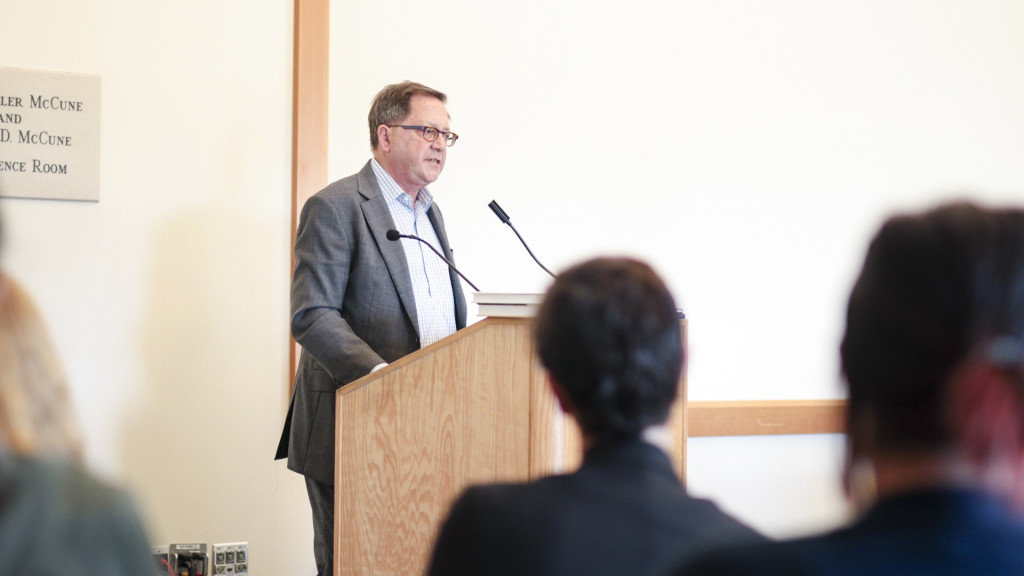 Education policy expert and professor of public policy at UC Berkeley David Kirp discussed the U.S. public school system’s need for reform as well as the positive impact of personal connections between students and teachers yesterday at the McCune Conference Room in HSSB.

Hosted by the Interdisciplinary Humanities Center, Kirp’s discussion focused on educational policies used by K-12 public schools across the nation and their effects on high school graduation rates, as detailed in his book Improbable Scholars: The Rebirth of a Great American School System and a Strategy for America’s Schools. During his lecture, Kirp recounted his experience analyzing the underfunded public high school system in Union City, New Jersey, and its tendency to perform academically as well as more affluent schools in other areas.

According to Kirp, the current structure of public schools, in which teachers receive raises based on student performance, can be a misleading way to approach effective teaching methods.

“Companies shut down stores that aren’t meeting their quotas, and they shut down failing schools on the same theory,” Kirp said. “They create what they call turnaround schools, where they bring in a new principal and new teachers and expect to see change.”

Kirp also said charter schools are becoming increasingly focused on profit to the detriment of their quality of education.

According to professor of English Christopher Newfield, education reform is among the most pressing national issues of the present day, especially in regard to access to higher education.
“Education is the pivotal issue of our time, the main positive thing that allowed the U.S. to be a prosperous society,” Newfield said. “We did semi-universal education starting in the 19th century and we need to do that on the college level now, which is essential for the economy and having a creative society that solves major problems.”
The quality of instruction provided by public school teachers is inversely related to the salary those teachers earn, Kirp said. According to Kirp, one of the most important aspects of a quality public education is fostering a strong connection between teachers and students.

“I’ve looked at programs that serve the youth from birth through college, trying to figure out what works, and they all have one thing in common, which is relationship-building.” Kirp said. “An intimate environment between kids who are explorers and teachers who are helping them … with the whole array of social, emotional, and cognitive needs of those youngsters.”

Kirp said the essence of a good education is bringing talented teachers to engage students in a challenging curriculum, citing the Success For All program, a standards based education reform program founded in the 1990s.

“Programs come and go but this has been in place in many of the toughest school districts and only gets adopted if all teachers sign up for it,” Kirp said. “The key to the [Success for All] model is that students are taught by two teachers at a time for the span of two grade levels. This way, the teachers come to know who those students are and how best to help them succeed.”

According to Newfield, a “tiered” system of public higher education can be harmful to large groups of students to the non-competitive quality of instruction at private, liberal arts colleges.

“1 percent [of students] would get this really high quality product and the bottom half of society doesn’t even finish college,” Newfield said. “Then the middle, like UCSB students, get second-tier good but not great quality like what their equivalents are getting at wealthy private institutions.”

Newfield said schools need faculty-student alliances and that students should get to know their professors better by visiting them during office hours and being active in lecture.

“I think students need to support innovative professors who try out new things and give them feedback and actively engage with them,” Newfield said. “Tell us what your specific goals that you have with your own education are. More dialogue, more education, more trust, that’s where we need to start.”

Professor of Education Russell Rumberger said Kirp’s findings on how a poor New Jersey district revived its education system have positive implications if his methods are implemented at other school districts.

“The strategies the district used could be replicated in other districts and thus offers some valuable insight in how to revive poor performing schools,” Rumberger said in an email. “Teachers can help this happen if they become an integral part of the reform process, which Kirp finds to be the case in this district.”

Fourth year English and psychology double major Alexandra Splan, who has conducted research in the field of education, said Kirp’s discussion helped give her a deeper understanding of the value of teaching.

“It amazes me still how many policies go into teaching kids and helping kids grow,” Splan said, “I wanted to know ways we can go around policies and focus on teaching kids.”

According to Splan, Kirp’s discussion about prompting change in the public school system is an inspiring model she hopes to see implemented in public schools across the nation.

“I liked the concept that he talked about regarding changing school dynamics, including things like the culture of respect, the culture of trust between student and teacher and the collaboration between schools,” Splan said. “I feel like that’s something that could really improve — the standard of learning and teaching and educating students.”

A version of this story appeared on page 7 of the February 5, 2015 print edition of the Daily Nexus.