Click here for an exclusive video interview with the creators of RateMyGold. 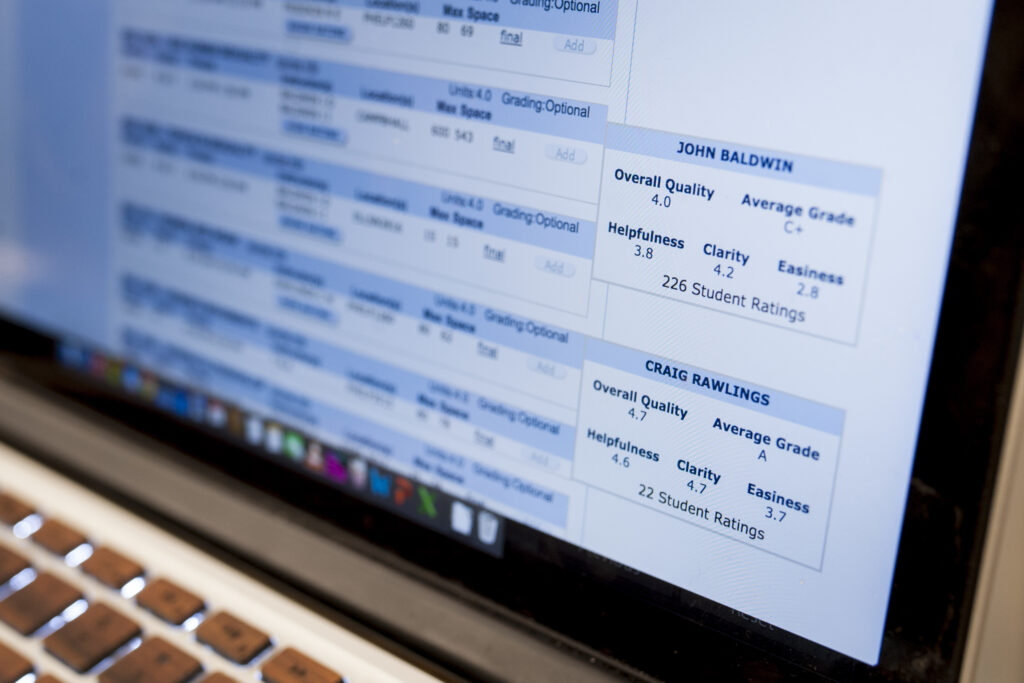 The Chrome extension introduces a “show rating” option on the GOLD course selection page and displays accumulated ratings from the the popular professor-rating site RateMyProfessors.com.  The extension is currently used by 1,774 students and shows the subcategories of overall quality, average grade given, helpfulness, clarity, easiness and number of student ratings.

According to RateMyGold co-creator Issayeva, there have been similar extensions connecting Rate My Professors to student portals for other colleges, but this is the first of its kind to be introduced at a UC Campus. She also said an update the team is currently designing works to reduce any errors involving ratings of incorrect professors appearing on GOLD.

“There can be a glitch where the wrong professor’s ratings show up next to the class,” Issayeva said. “We’re currently working on fixing that as well as fixing any issues that arise as more people start to use it.”

RateMyGold co-creator Barbello said they have already pushed one update to include the amount of ratings on each professor to create a more accurate source of information on GOLD.

“We just released that update today and it will make sure students are able to see how many student ratings each score involves,” Barbello said, “because there are some high and low rankings that only have one or two entries.”

According to Barbello, the team finished the extension on Saturday and submitted the extension to the Google store Sunday evening. The extension had gained around 30 installations by Monday afternoon, Barbello said.

Barbello said he did not have experience with JavaScript before the Hackathon but that because other members of his team were proficient they were able to collaborate in order to create the extension. According to Barbello, the RateMyGold extension was written in JavaScript and submitted to the Google app store through a Chrome Apps & Extensions Developer tool.

“I had been thinking about the idea for a weeks before,” Barbello said, “but once we got together, it took 30 hours during the Hackathon to make … I put it up using the develop tool the next night.”

Issayeva also said administrators and professors have yet to comment on the software, but there have not been any complaints since the introduction of the extension on Sunday.

According to SB Hacks co-founder and fourth-year computer science major Trevor Frese, the team did not present their design at the Hackathon for the prize drawing, but submitted the extension as a part of the competition. Frese said there are multiple reasons for not presenting the final project, including lack of confidence in design and lack of interest in winning the Hackathon prize.

“The [Chrome extension] team most likely did not present their extension because they weren’t trying to get the prize,” Frese said. “They just wanted to make something as a team and turn it in.”

According to Barbello, the Hackathon provided the team with an opportunity to work on a project in the midst of busy schedules and intensive classes.
“The Hackathon gave us an excuse to come together and just program something for a weekend,” Barbello said. “We all have really busy schedules so it was a good way to just sit down and make it.”

Frese said the extension will prove to be useful for all university students down the line.

“I wish this existed before. I’m a senior now and it would have been great to have something like this during all those years,” Frese said. “I think the extension is awesome and it’ll be really useful for students here.”

A version of this story appeared on page 4 of the February 5, 2015 print edition of the Daily Nexus.