The Daily Nexus
Music
John Kay and Dirty Knobs Rock Out in SOhO
February 4, 2015 at 8:42 pm by Daniel Slovinsky 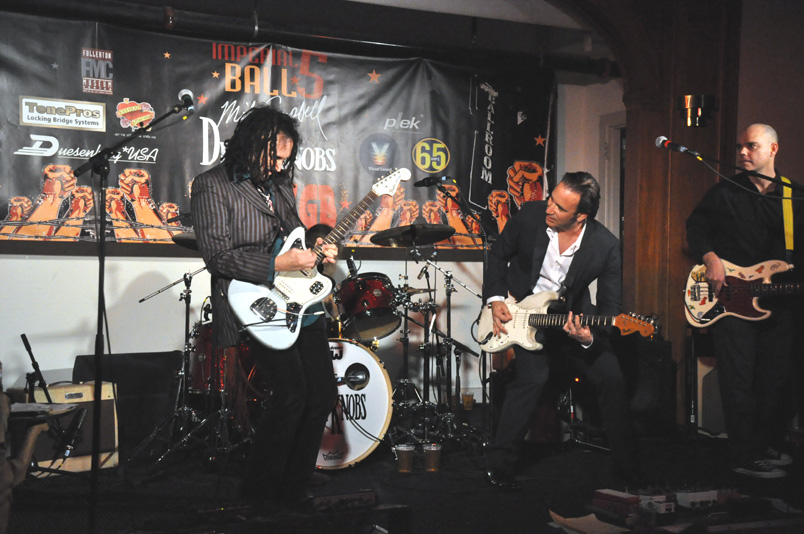 The crowd gathered as close as security allowed when John Kay, rhythm guitarist, vocalist and primary songwriter for Steppenwolf, took the stage on Friday night at SOhO Restaurant & Music Club before being joined by the night’s main performers, The Dirty Knobs.

Known for hits such as “Born to Be Wild” and “Magic Carpet Ride,” Steppenwolf achieved worldwide recognition in the late 1960s before breaking up in 1972 and then on-and-off reuniting through the years. Although he often performs with a backing band, John Kay, a Santa Barbara resident, is now the only original member of the group.

Kay opened the night solo, playing blues songs from his “rambling days” before Steppenwolf. Using his instantly recognizable slide guitar style and switching between acoustic and steel guitars, the musician told stories from his life to provide context for each song. During this set, the general admission audience crowded together near the doorway to see from behind those still eating dinner in front of the stage. SOhO staff also maintained a no-talking policy, but that did not stop some of the more enthusiastic audience members from yelling the occasional “You rock, John Kay!”

Any ability to enforce the rule went out the window when The Dirty Knobs walked onstage and joined in midway through “The Pusher,” turning the quiet, but passionate song into a booming, energetic spectacle. Using every inch of space available to them, the crowd danced, shouted and sang along with whatever words they knew. Kay proceeded with “Sookie Sookie” and “Magic Carpet Ride,” ending with a long, aggressive performance of “Born to Be Wild.” He somehow preserved all the roughness and energy of the original recording with some to spare.

After staff cleared the tables and perfected sound levels, The Dirty Knobs returned sans Kay with their own set list to carry out the night. The Knobs, regulars of SOhO, are generally considered a side project of Mike Campbell, lead guitarist for Tom Petty & the Heartbreakers. But on Friday, the band was also joined by Ron Blair (who replaced regular bassist Lance “Crawdaddy” Morrison currently on tour with Don Henley) and keyboardist Benmont Tench, both original members of The Heartbreaker.

On Tench’s inclusion, Campbell said he was eager to play with Kay, but did not realize until after he took the gig that they would need a keyboardist. “You can’t play Steppenwolf without that fucking organ. And there’s only one guy I know up to the challenge,” Campbell said.

The band performed an eclectic list of cover songs, from Johnny Kidd & The Pirates’ frequently covered “Shakin’ All Over” to The Kinks’ relatively unknown “Apeman.” Seventy-nine on Rolling Stones’ 100 Greatest Guitarists list, Campbell proved that legendary guitarists can afford to be generous, and made a point to give every band member a chance in the spotlight. At one point, he invited the group’s roadie, known simply as Chinner, to play lead guitar on a song.

In addition to improv solos from Blair and Tench, rhythm guitarist Jason “Ape” Sinay traded lead parts with Campbell, and drummer Matt “Swampfox” Laug played complicated fills, while Campbell frequently directed the crowd’s attention to him as if a proud mother. With the exception of Tench, every band member also sang on at least one song.

By the end of their set list, the audience was chanting “Dirty Knobs” until the band reemerged for their own rendition of the Jimi-Hendrix-popularized “Hey Joe” with an intro featuring segments of “1983.” Their extended, over-driven and no-holds-barred version of the song put the members’ true skill and cohesion on display. Campbell demonstrated much of the speed, agility and overall guitar mastery of Hendrix, with fewer of the show-off-y riffs.

As the crowd thinned out, the members walked around the club, speaking with fans and posing for pictures. Laug said the night exceeded his expectations, and that playing with other artists is his favorite aspect of performing live.

“Tonight was one of the better gigs ever. It was amazing,” he said. “We don’t get that much [interaction between live musicians] these days. Because of the technology, everybody can do everything on the computer by themselves. It’s nowhere near human interaction.”

He explained that the band only met John Kay for the first time shortly before the show, and that it only took a few minutes to prepare.

“You know, the songs are radio staples, you hear ‘em everyday almost,” Laug said. “I listen to the radio, I think I know how it goes; just get up there and rock it.”