The Daily Nexus
News
Art Professor Shares Images of Jailed Youth as First Event of UCSB Reads 2015
February 4, 2015 at 3:32 am by Megan Mineiro 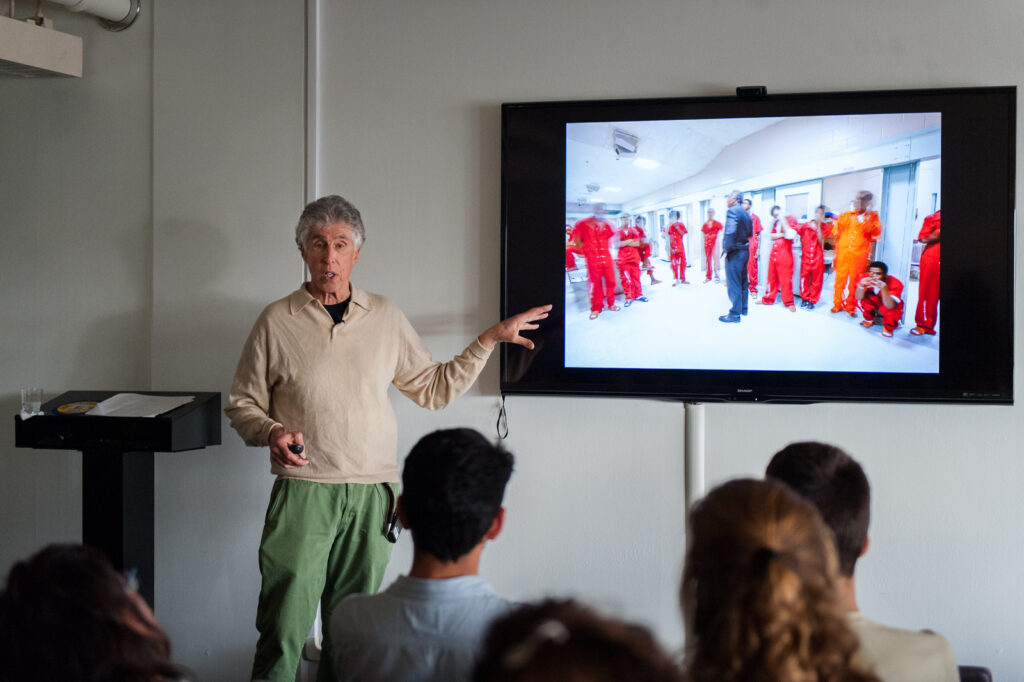 UCSB Art Professor shared his photographs and experiences from his eight years of photographing incarcerated youth in the United States from his books Youth in Justice and Girls in Justice as the first event of UCSB Reads 2015. Kenneth Song/Daily Nexus

Art professor and photographer Richard Ross spoke about his newly published book Girls in Justice as well as his work documenting incarcerated youth in detention facilities across the country Tuesday night at Davidson Library.

The first in a series of UCSB Reads 2015 events, Ross shared stories of common issues he has observed during his eight years of photographing detention centers, including the use of solitary confinement and the prevalence of drug and sexual abuse among incarcerated youth. Photographs published in his earlier book Juvenile in Justice have been on exhibit nationwide and used as a tool for advocates for juvenile justice system reform. Images from his new book are currently on display on the first floor of the library.

Ross, who previously worked as a photographer for Time Magazine, Newsweek and the New York Times, said he wants his exhibits and books to spark change in the juvenile justice system.

“I’m not a judge; I’m not a probation officer. I’m an artist; I’m a human being,” Ross said. “I decided with my work I’m going to use art as a weapon.”

Kids can’t sue anybody. They have no rights. So it’s really easy to bully kids. – Art professor and photographer Richard Ross

According to Ross, one of the underlying issues within the juvenile justice system is that “as a society, we bully kids.”

“If you bully someone who is a person of color, you might get some pushback, you might be sued,” Ross said. “Kids can’t sue anybody. They have no rights. So it’s really easy to bully kids.”

Ross said while there have been improvements made in the system since the publication of Juvenile in Justice three years ago, the situation for incarcerated girls has worsened.

“The population of girls increases in relation to boys and girls have unique problems,” Ross said. “That’s why I published the book on girls to focus exactly on what’s going on with them.”

Ross shared dozens of examples of his images, including one comparison between a detention cell in El Paso, Texas to one at Guantanamo Bay.

“This holds the worst terrorist in the world. This holds a ten-year-old,” Ross said. “What’s the difference between the two? Who has the window? The terrorist, not the kid. I start presenting images like this to state and federal authorities . . . I start creating a bit of a buzz.” 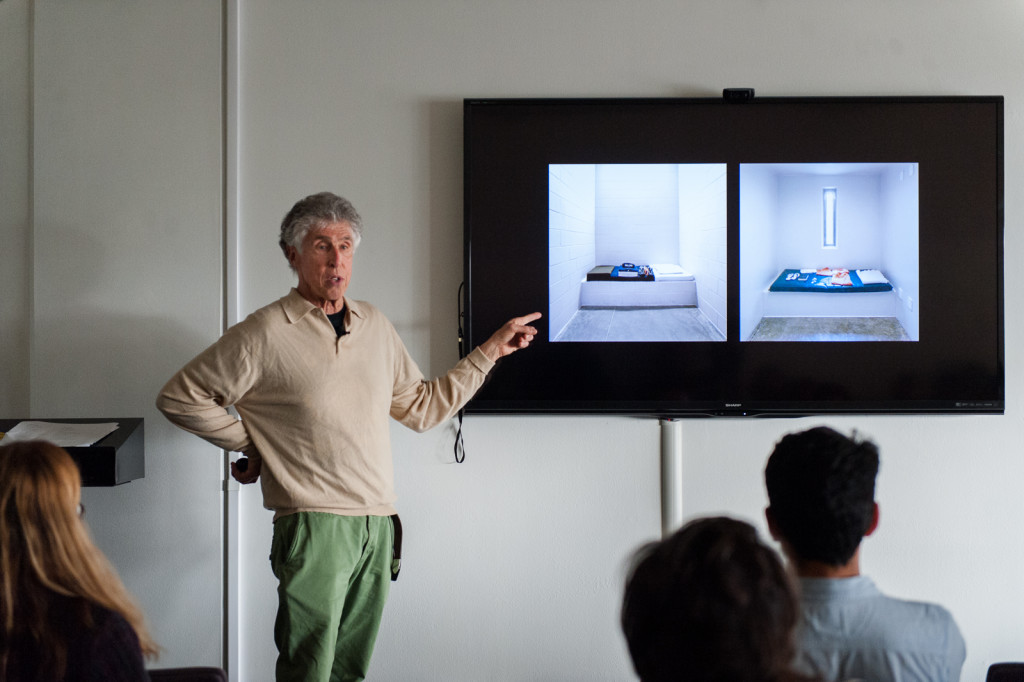 Ross said the plan to eliminate the use of solitary confinement at the Rikers Island complex, an institution he described as “nefarious,” is a move in the right direction, but that he will believe in substantial change “when he sees it.”

“For four years I’ve been trying to get into Rikers and I’ve been told by the head of detention . . . by [Mayor] Bloomberg, by [Mayor] De Blasio, by judges, ‘You’ll never get into Rikers in this lifetime,’” Ross said. “New York State and North Carolina are the two states that default and have kids automatically tried or looked at as adults. It’s a terrible system and I hope Rikers gets better.”

According to Ross, while solitary confinement is an issue of national importance, it also pervades the local justice system in Santa Barbara.

“The state is supposed to act as the parent when the parent can’t,” Ross said. “But these are the closets that we put kids in. They’re under the guise of administrative segregation, time-out rooms and desensitization rooms. In Santa Barbara, I interviewed a kid that was in there for three weeks.”

Ross said while visiting a detention center in Monterey Park, Calif., he came to understand that the large percentage of incarcerated youths are victims of sexual abuse.

Jessica Sparks, an assistant with the Davidson Library Outreach Department and a third-year English and Renaissance studies major, said she was shocked by the sheer number of incarcerated youth that Ross’s project has revealed have been abused.

“I thought it wasn’t that many, but hearing it was all of them it brings a whole new level of depth to the pictures downstairs,” Sparks said.

According to Ross, many children in the juvenile justice system are suffering the consequences of their parents’ poor decisions.

“A girl that was doing 35 years — she murdered somebody,” Ross said. “She was high on meth. Her mother gave her meth when she was seven. This girl has already served about ten years . . . she was sentenced at 14 and is going to serve until she’s 34.”

Both my kids, and myself, avoided these kids’ situations because we had families that cared about us. We had resources from our family, from our community. These are kids that have none of that. There’s so many people that live paycheck to paycheck that are one step away from disaster and these kids are the result. – Richard Ross

Ross said one director of a detention center shared with him the difficulty of protecting transgender youth within the system.

“Often they are thrown out of their family and have to respond with survival — sex to eat, to sleep, to live,” Ross said. “The director said [of a male to female transgender youth] ‘If I put her in with the girls, she’ll be hurt. If I put her in with the boys, she’ll be killed. I keep her in isolation, I know it’s against federal law . . . But she is not going to be killed on my watch.’”

According to Ross, African American and Latino youths are at a higher risk of being tried as adults.

Third-year psychology and communication double major Alexis Lin, who took an art class with Ross last Spring quarter, said it is a glaring issue that the majority of the incarcerated are of color.

“I think a lot of youth get stereotyped into certain categories and that’s something that needs to be acknowledged,” Lin said.

Ross said he often thought of the difference between his own children’s upbringing and that of incarcerated youth while visiting detention centers.

“Both my kids, and myself, avoided these kids’ situations because we had families that cared about us. We had resources from our family, from our community,” Ross said. “These are kids that have none of that. There’s so many people that live paycheck to paycheck that are one step away from disaster and these kids are the result.”

First-year English major Hector Sanchez Castaneda said he also thought of his family when he learned about the living conditions of incarcerated youth in America.

“When I saw the pictures downstairs, on the first floor of the library, when I saw the little girl — she’s my sister’s age, eight-years-old,” Sanchez-Castaneda said. “It broke my heart to see a little girl like that with no family whatsoever to support her.” 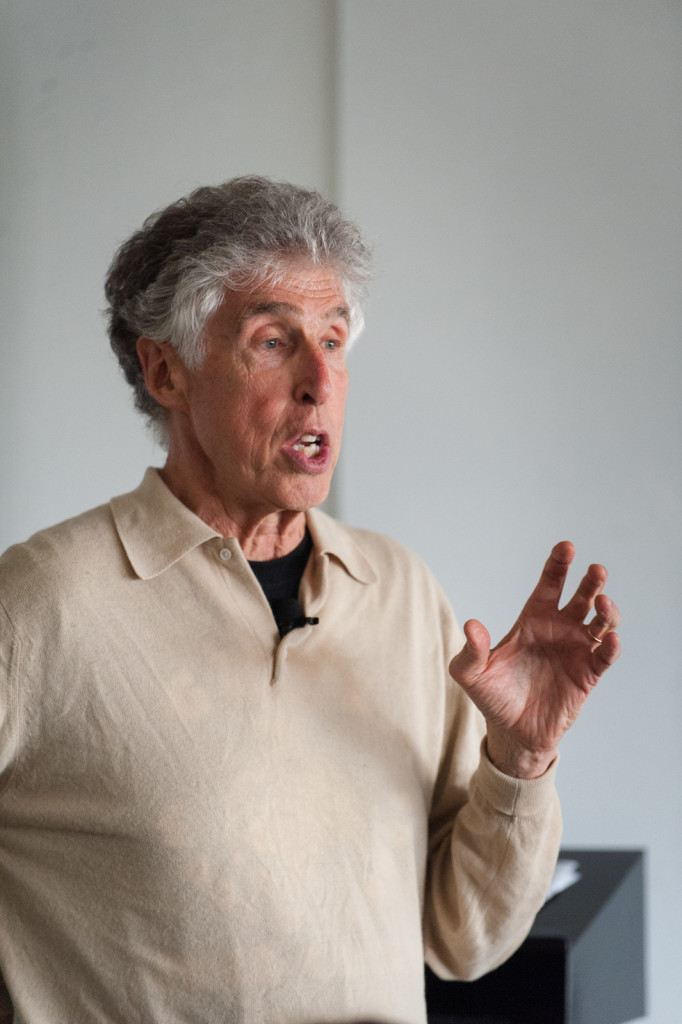 According to Ross, communities are better off when detention centers are closed and resources are invested elsewhere in the community.

“We’ve been closing down a lot of these mass incarceration institutes, especially for kids,” Ross said. “We’ve turned a corner and crime hasn’t gone up . . . the data proves that the more you release kids and give resources to the community, the better the outcomes for kids and communities remain safe.”

Ross said there are still significant changes that need to be made in the juvenile justice system and hopes his photos will play a part in communicating the need for reform.

“What’s the common visual vocabulary: that if somebody sees a picture, you think about it,” Ross said. “I want to create that. I want to have images that haunt you, that when you think of kids in the system you have them looking back at you saying don’t forget me.”

My last name contains no hyphen. It’s a rather common mistake, so no worries!