The Daily Nexus
News
UCSB Hackathon Draws Participants, Sponsors From Across State
February 2, 2015 at 2:40 am by Juliet Bachtel and Addie Burk 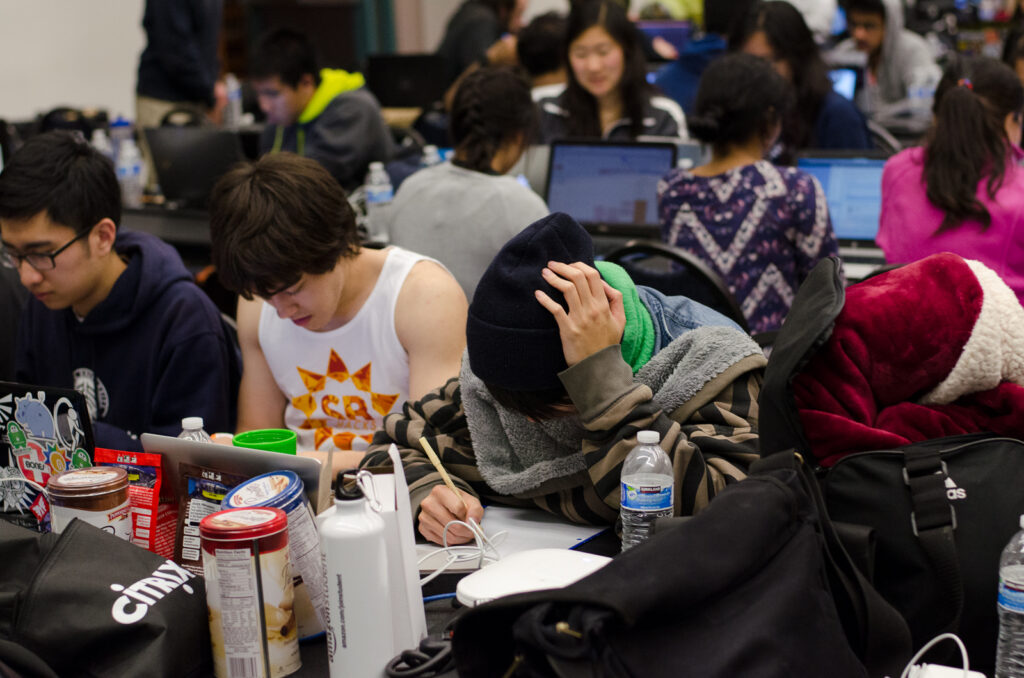 The Hackathon took place over 36 hours in the UCen and included competitive computer coding and coding based-workshops where over 500 participants from schools all over California were put into small groups to create projects that qualified them to win cash or tech-gadget prizes. Judges examined the separate projects and decided winners based on work ethic and teamwork, not necessarily on the quality of the final product. Major companies represented at the event included Microsoft, Cisco, Intel, Citrix and others.

SB Hacks also held a series of educational tech talks this past Saturday, the second day of the three-day Hackathon weekend, to introduce participants to new topics in computer science and to assist hackers with project challenges that had arisen over the course of the competition.

The talks covered a wide range of topics including discussion on game design and workshops for platforms such as Cydia, eSports and Angular, and for teaching Swift, an iOS programming language used to design applications. During the workshops, programmers of all levels also had an opportunity to write online versions of the best-selling mobile game Flappy Bird. 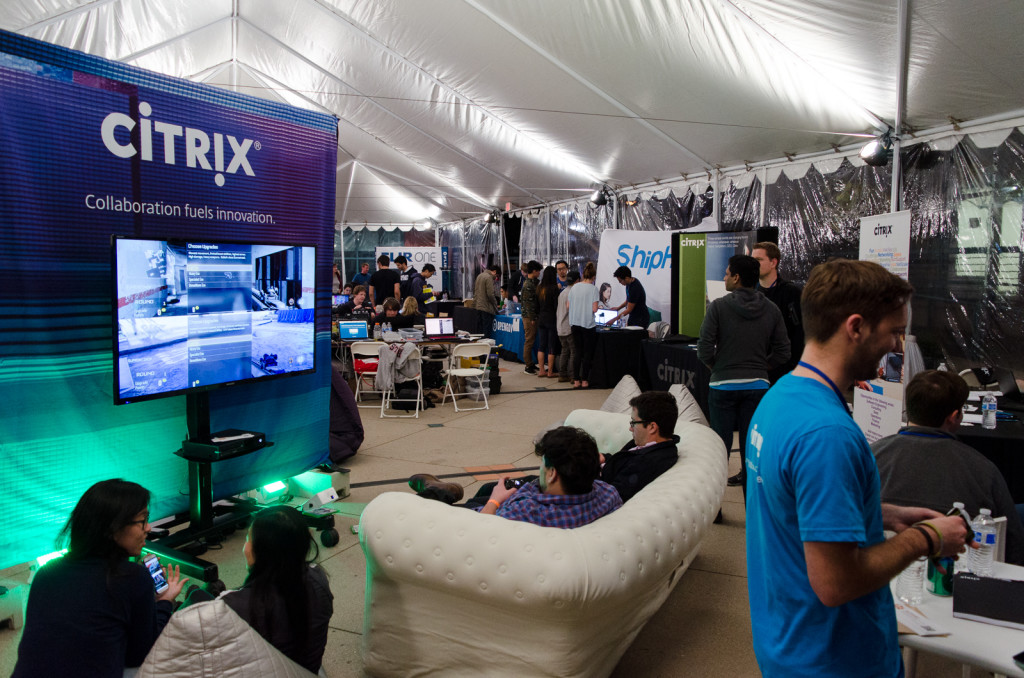 Several video game tournaments were held in a tent just outside the Corwin Pavilion. Will Tran/Daily Nexus

During the Hackathon weekend, senior software engineer at Citrix Lucas Myers presented a talk on a web platform called Angular, emphasizing its popularity in web design.

“There’s a lot of other frameworks and it depends on what they’re doing but if they’re working on a web app this is one of the bigger frameworks out there” said Meyers, “It’s nice to give people exposure to it, and it’s also one that a lot of people are hiring for right now.”

Alumnus and local tech business owner Jay Freeman also gave a talk on taking advantage of bugs in software and “jailbreaking” devices. He also introduced his program Cydia, an alternative to the Apple app store, and focused on its ability to customize devices with specific features not available in Apple’s app store.

“Not everything is an app that could go in the app store in the first place … Cydia instead is about extensions and modifications,” Freeman said, “Cydia is a place where you can get custom looks for your phone, you can go and get new features … you can also make modifications inside of apps.”

According to Dutcher, the application his team created was inspired by video game programming.

“The impetus for this problem is a 3D programmer in videogames. If you go from area A to area B, there will be a pop up and the music changes,” Dutcher said. “So you have theme music for areas. This is obviously useful to have music for different areas or for self-guided tours. Augmenting reality with geographical based theme music is really satisfying!” 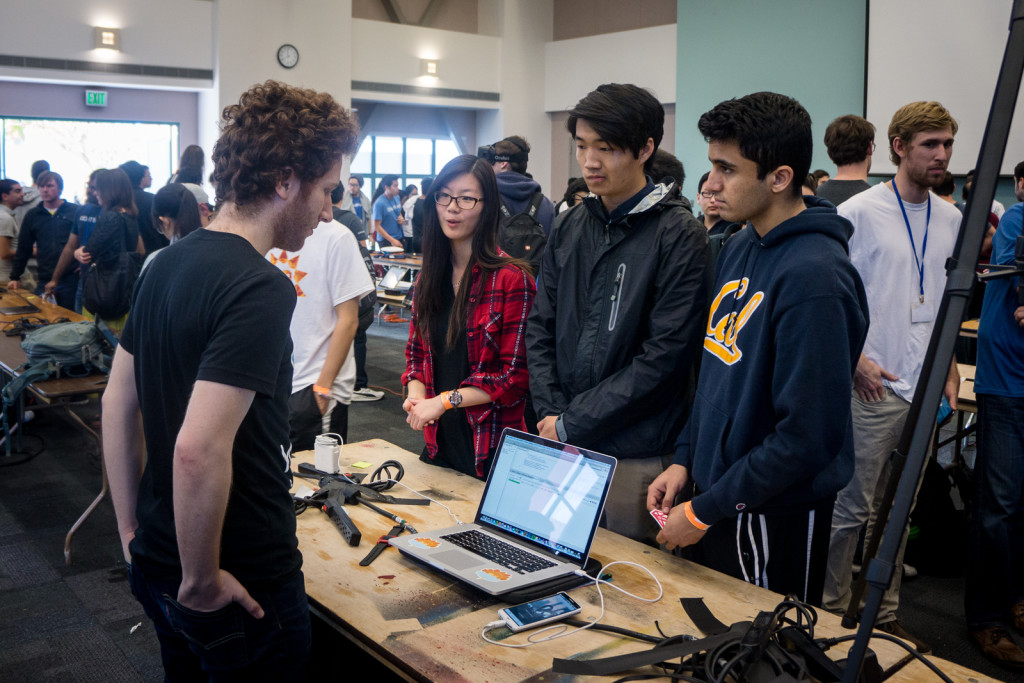 Hackers presenting their hacks at the first round of the exposition. John Clow/Daily Nexus

Third-year Pomona College economics major Warren Lee, who attended several of the talks on Saturday including those for game development and Swift, said he thought the Hackathon was a great way to gain one-of-a-kind experiences in computer science.

“I didn’t realize the sort of depth and analysis that people took into eSports and how they’re trying to develop it into an industry of its own,” Lee said. “It’s been really mind opening to see all these companies and how they operate.”

West College computer science major David Anderson said he created a device to monitor the oxygen consumption rate in a person’s heart through LEDs and a computer software program.

“So basically we created a device to measure the oxygen consumption of your body,” Anderson said. “Whether you’re sleeping or hiking or running or even staying still, it will reflect that in the LED. If we had more time, we’d be able to graph it and you’d see some oscillations that would reflect the rate of oxygen consumption in your blood.”

West College electrical engineering major Robin Morales, one of Anderson’s teammates, and said he hopes the device can be made smaller, more portable and more practical for everyday use.

“We did this so you can take it with you,” Morales said. “You don’t need to be in a hospital room or have a huge clunky device at home. … It interfaces with a computer; you can enjoy your hike and see how you did instead of constantly checking. …The components will get smaller and cheaper and then can get integrated with smart phones or even fitness watches.”

Anderson said the team’s project transcended winning a prize and that their creation and development of the app was what team members were most proud of.

“We haven’t finished the software yet, so you know, we might win something,” Anderson said. “But we didn’t come here to win, we came here to learn something.”

“It’s sensing capacitants. Your body acts as a natural capacitant. So when you touch it, it sends a signal and we can measure that signal and then can play a sound off of that. It’s sort of like the touch screen on an iPhone,” Chen said. “There’s different notes, which activate from pressing your finger on the wires.”

According to Chen, the piano costs less than $30 and will allow individuals who are unable to afford pianos to learn and play at an affordable price.

“The second part of this is that let’s say you want some piano lessons without actually paying the price for them,” Chen said. “Well, if you press this one wire, it will send a signal to a computer to a different piano. So you could essentially teach someone how to play piano with only two of these paper pianos — you don’t need a real one.” 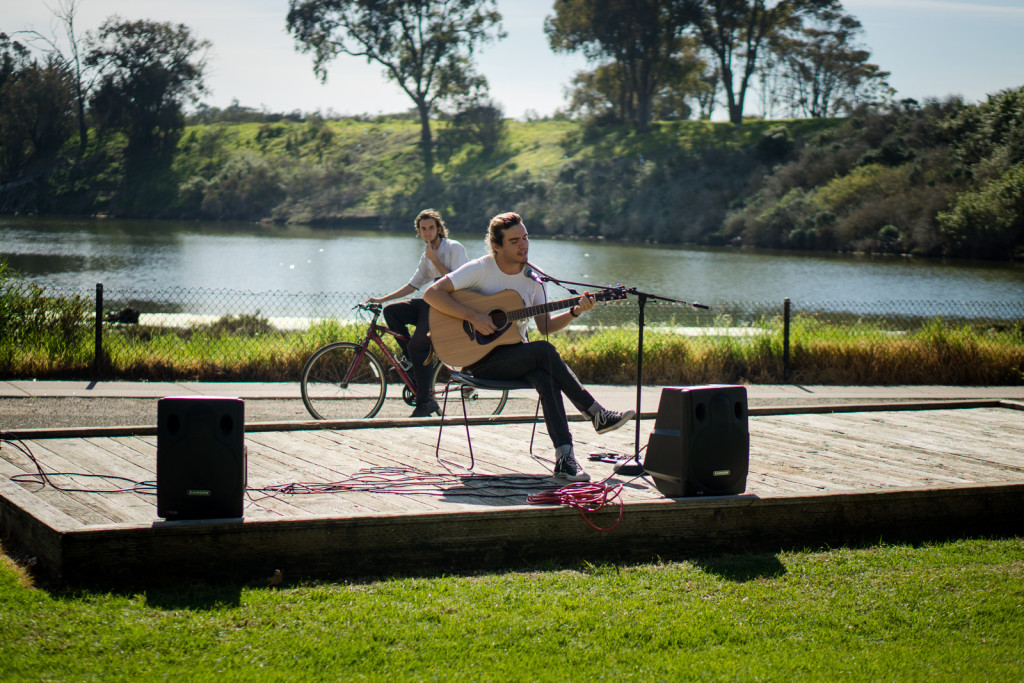 Graduate student in the department of computer science at Cal Poly Pomona Sean Chen said the university’s campus and atmosphere positively added to the hacking experience.

“One thing I like about hackathons is all the people you hack around with and all the different sponsors, all the free swag and good food and the good environment” said Chen. “Instead of being secluded to just the event you have the option to go to the beach, to Isla Vista or around the campus … you have more options here.”

Read about the O2 monitor and was immediately reminded of Novoselov’s work in ultra-thin graphene LEDs. Looks like it would be a great application of the technology.