The Daily Nexus
News
Protesters March Through Isla Vista In Objection of Evictions
February 2, 2015 at 3:06 am by William Leiva 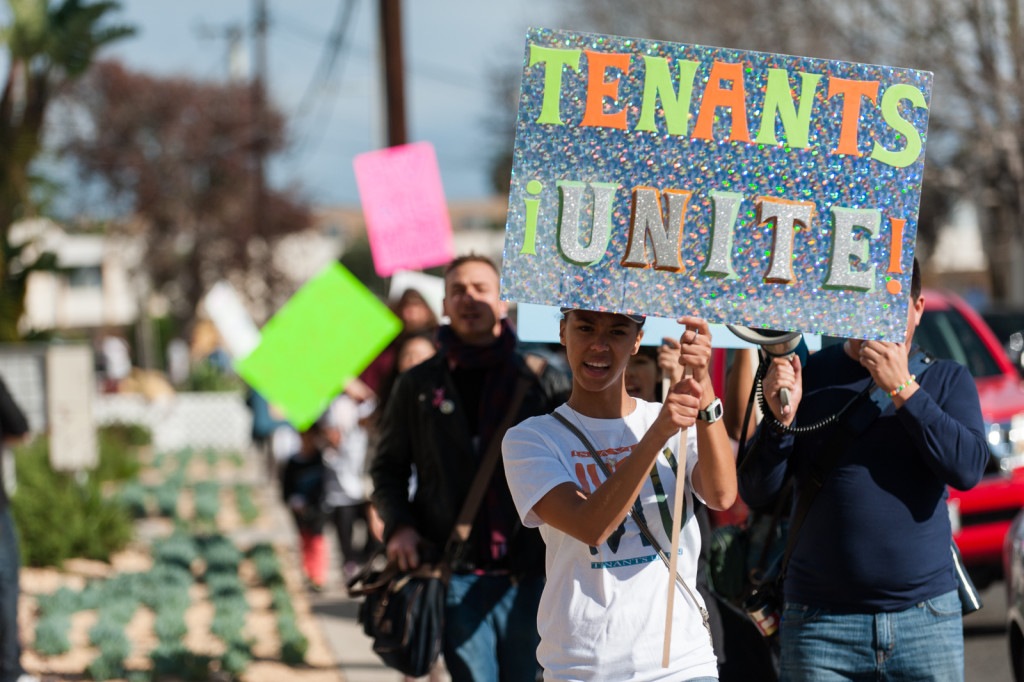 Community members marched through Isla Vista last Friday, protesting the eviction of tenants from their apartments in Abrego Villas on the 6700 block of Abrego Road. Kenneth Song/Daily Nexus

The Isla Vista Tenants Union (IVTU) held a protest on Friday by marching from the Pardall Center to the 6700 block of Abrego in order to bring attention to the evictions of several families from their homes at Abrego Villas on 6754 and 6764 Abrego Road.

The march featured over 50 protesters who shouted chants such as “What do we want? Justice! When do we want it? Now!” as well as “The people, united, shall never be divided!” and “There is nothing majestic about being a slum lord!” 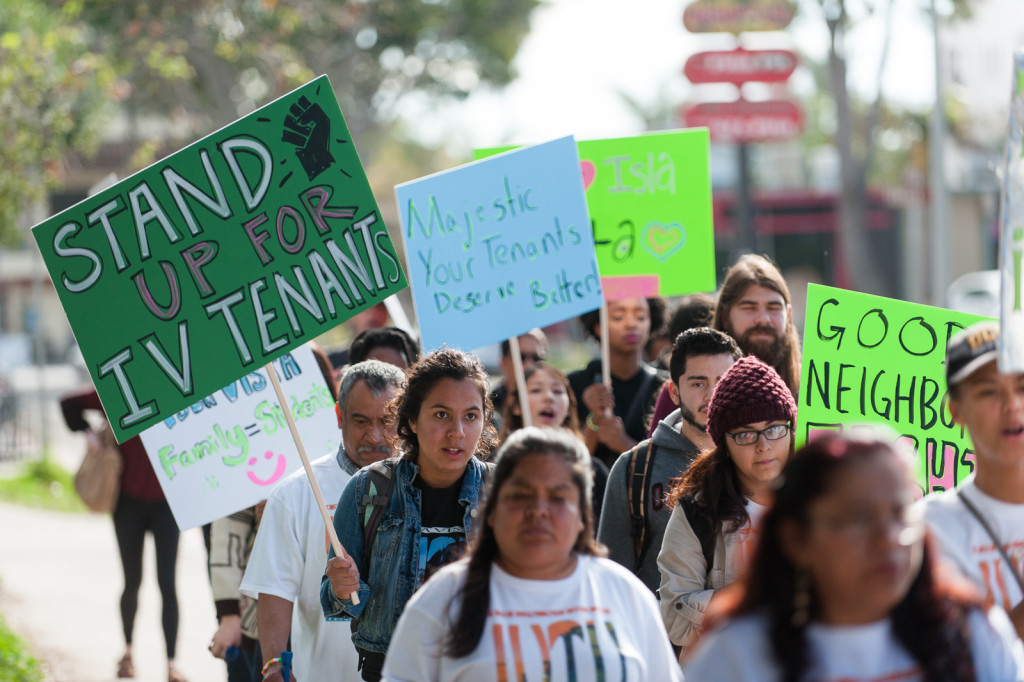 The protest began at 1 p.m. with a serving of Woodstock’s pizza before the demonstration, followed by the march through I.V. and ended around 5 p.m. outside of the residents on the 6700 block of Abrego. I.V. residents showed support by honking car horns, cheering on protesters and by joining the protest.

Third-year biology major and event attendee Kevin Villar said he relates to the evicted families because of his personal experience with a similar situation that occurred in his hometown.

“This situation has a huge impact on me because my family and I got evicted during my childhood at apartments that we used to live at,” Villar said. “It makes me angry to see the reality that most landlords in I.V. only care about profit.”

Villar also said the evictions may have been particularly “traumatic” for children of the evicted families who may have thereafter been exposed to inappropriate aspects of I.V. culture.

“Just think of the kids and the traumatic experiences of not having a home. They deal with that fact that there will always be drunken students on the street and see drugs weekly,” Villar said. “Yet they still get evicted, which is injustice.”

Former I.V. resident Maria Hernandez, who was among those evicted from the Abrego Villas, said her family prefers to live in I.V. and that the eviction has been particularly difficult because she is a single mother who provides for other family members.

“It affected us so much. I live in Goleta but I would rather live in Isla Vista much more because my family prefers to be here,” Hernandez said. “I believe it is an injustice, especially because I am a single mother who supports my children and grandchildren.”

Another evicted tenant from the Abrego Villas, Valentina Hernandez, said she believes it was racist of the landlord to evict her and her family.

“It is discrimination because they initially said they were not going to kick us out,” Valentina Hernandez said. “I believe it is a racist act because they still do not have anyone living there, not even new students who can afford it. They said that they would reconstruct the building and slowly let us back into homes.”

Valentina Hernandez said she has been living in different hotels and homes since she was evicted and said she feels like she has not been told the entire truth regarding her eviction situation by her landlord or the property management company.

“I have been living in several motels since then. My daughter’s a school teacher and has also felt bad for us and housed us as well. I feel like a refugee,” Valentina Hernandez said. “I think this type of thing happens every now and then but I feel lied to and discriminated against.” 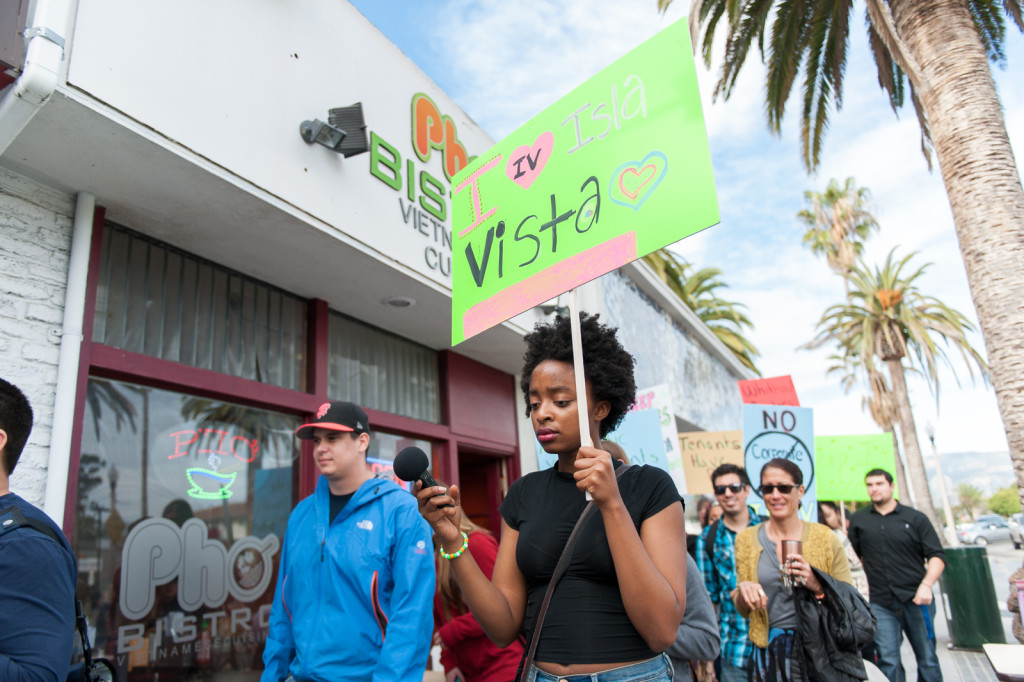 Freebirds employee and I.V. resident for the past 13 years Briselda Martinez said she still does not have a permanent home and now lives in a place without a bathroom.

“They did so much damage to us,” Martinez said. “I do not have a stable home still. They only gave us 60 days in the summer to find a new house. Now, I pay $750 for a really cramped up room with no bathroom whatsoever.”

Martinez also said being homeless is not an option because she has family in Mexico that relies on her for financial support.

“I am going to withstand everything because I cannot live in the streets,” Martinez said. “I definitely cannot go back to Mexico because there are no jobs there. I send money to my sons in Mexico and it is difficult.”

Three-year resident of I.V. Jacinto Rodriguez said he joined the protest because he believes the evictions were an act of discrimination for the sake of profit.

“I feel like it is racist and very wrong,” Rodriguez said, “We have nowhere else to live and it is not the same.”

Rodriguez also said the evicted tenants do not deserve to be booted from their homes when they have insurance and good credit records.

“This is an effort between everyone because they do not want to see my people evicted from Isla Vista. It is essential to have a roof over your head,” Rodriguez said. “In my case, they have checked my record, insurance and credit which is good and important, but they still evicted me.” 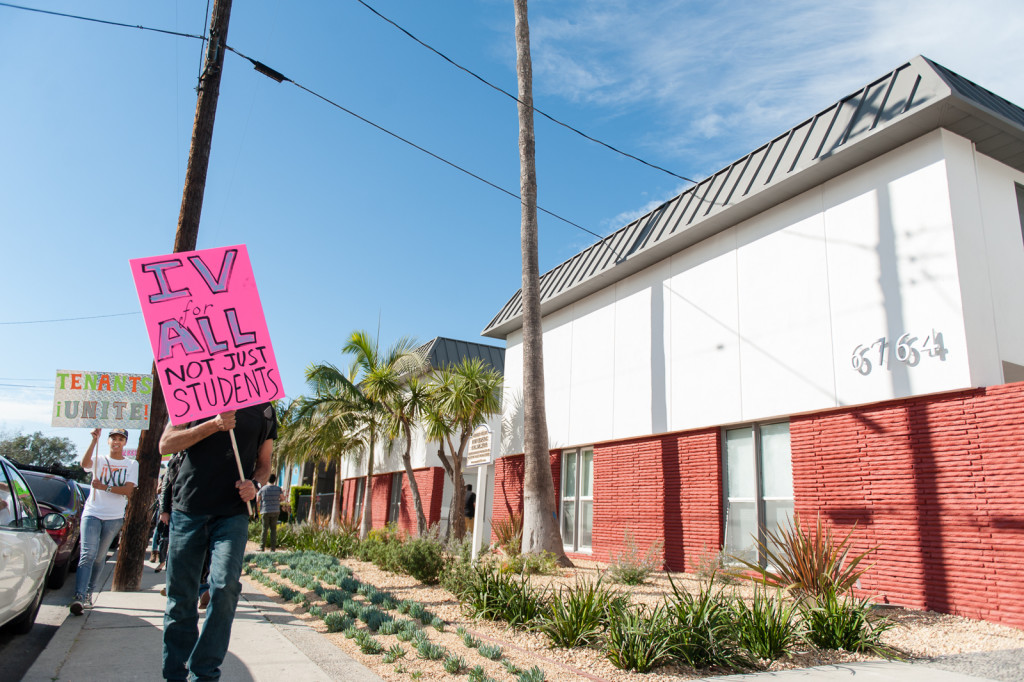 Alumnus and former I.V. resident Sharlene Macharia said it is vital that demonstrations bring attention to the eviction situation so that students and I.V. residents can collectively take action so those IVTU alleges were wronged can see justice, as well as to prevent similar instances from happening in the future.

“I am glad that people are protesting and marching. If people do not talk about it, then this will continue to happen to people,” Macharia said, “Students need to be aware that families are getting kicked out and that this is wrong.”

Macharia also said landlords do not care about the families, which makes it difficult for landowners and property management companies to sympathize with I.V. residents.

“Kicking people out of their homes is just wrong, no matter what management or company it is,” Macharia said. “The landlords only care about the money and are not even from Isla Vista so they cannot relate to life here.”