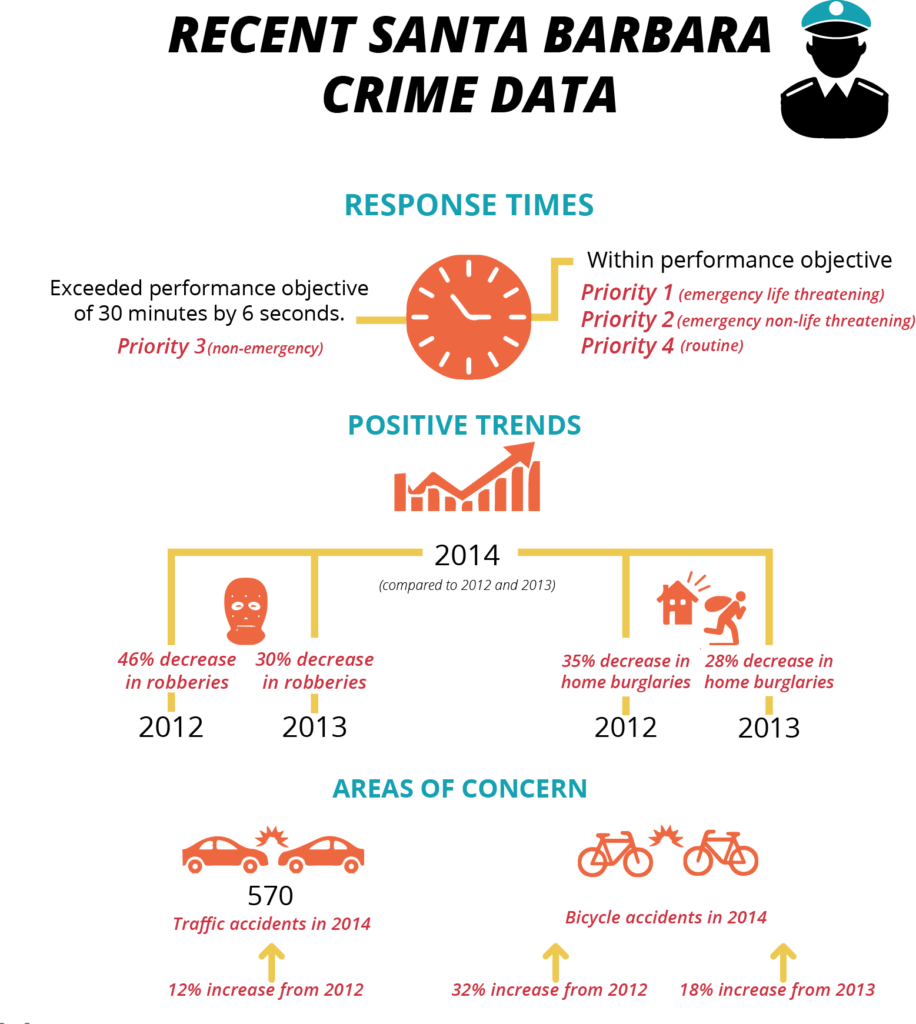 The report includes data from the past five years and shows trends for specific areas of crime, with robberies, residential burglaries and theft from vehicles experiencing a strong three-year downward trend. According to the crime report, bicycle-vehicle collisions have increased sharply in the last year.

SBPD spokesperson Sgt. Riley Harwood said an incident that took place about a week and a half ago involving three juveniles committing several burglaries in one night is an exemplification of how burglary and theft rates on paper seem may more extreme than the reality.

“All it takes is one or two or three individuals to commit a series of burglaries and really skew those numbers,” Harwood said.

Harwood also said SBPD has employed a special team to keep track of “career criminals,” or criminals that earn their income through criminal activity.

According to Harwood, the recent decrease in crime can also be credited to an ongoing nationwide decrease in violent crimes and property-related crimes.

“With regard to … violent crime and property crime nationwide I think part of it is we’re following a trend I think people are seeing all over with regard to lower crime rates,” Harwood said.

According to the Federal Bureau of Investigation (FBI), national violent crime rates for 2013 are at the lowest they have been in the last five years, with a 4.4 percent decrease since 2012, while the same agency reports a 4.1 percent decrease in property crimes.

While violence and property crime rates have shown recent decreases for Santa Barbara, the report states traffic-related incidents are on the rise for the third year in a row, with the rate in 2014 the highest it has been in the last six years.

Former SBPD Command Officer Mike McGrew said one reason for the increased bicycle accidents is simply the increased number of bikers on the roads.

“If you look back to when they built the city, these streets probably weren’t designed to have high volumes of traffic for bicycles,” McGrew said.

The report further showed that nearly all average police response times met the performance objective, while the average response time to non-emergency calls exceeds the objective by six seconds.