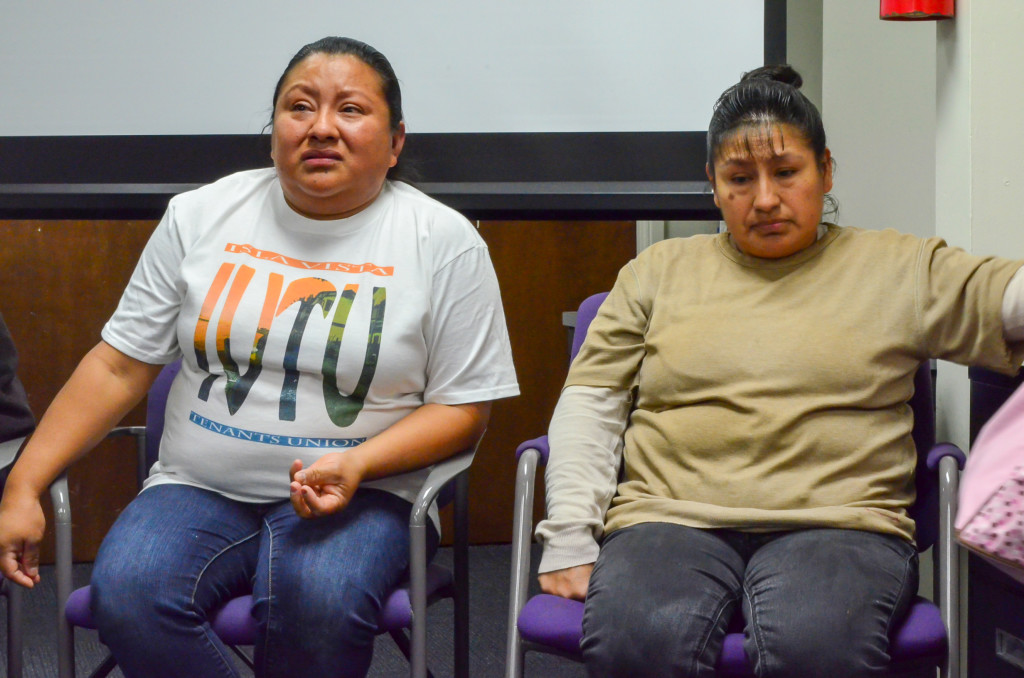 The Isla Vista Tenants Union plans to march through I.V. to protest the eviction of tenants from an apartment complex on Abrego. IVTU held a meeting earlier this week, seen here, about the situation. Daily Nexus File Photo

The Isla Vista Tenants Union (IVTU) will lead a march from the Pardall Center through I.V. Friday at 1 p.m. to protest the eviction of six households from their apartments at 6754 and 6764 Abrego Road.

IVTU president and third-year economics major Andrey Bogdanov said the march has been organized to promote justice for the evicted tenants at the Abrego Villas and to inspire further legislative action to prevent future unjustified evictions in I.V.

“We are requesting that Majestic Asset Management pay the tenants the relocation benefits that they rightly deserve but have not yet received,” Bogdanov said. “We would like to show to the legislatures on the county and statewide levels that Isla Vista is in need of legislative reforms and improvements to strengthen tenant variety as well as to improve the housing situation in I.V.”

We are not talking about statistics here, we are talking about lives of real people who are being denied fair and equitable housing rights and opportunities. – IVTU president and third-year economics major Andrey Bogdanov

Bogdanov said the march is also intended to educate and unite all tenants renting spaces in I.V.

“Lack of knowledge on the part of the tenants about their rights in housing issues is a big problem in Isla Vista and … affects all members of the community,” Bogdanov said. “The only way we can create a real difference is by becoming more educated and uniting to demand better housing.”

California Assemblymember for Santa Barbara Das Williams said he supports the IVTU’s campaign and that without their action there would be little knowledge of the issue in I.V.

“I think that if they weren’t doing something that we might not even know about it,” Williams said. “I hope they will continue to engage the owners in a respectful and civil manner as something that might actually provide some benefits for the families that were involved.”

Bogdanov said this is not a one-time issue but rather the latest in a series of evictions of low-income residents, primarily Latino families, in I.V.

“We are trying to rally the community support and raise awareness about the fact that these housing issues are recurring, and ongoing” Bogdanov said. “We are not talking about statistics here, we are talking about lives of real people who are being denied fair and equitable housing rights and opportunities.”

We will defend our position in court which is the proper place and one which will ensure that both sides are given an opportunity to present all of the facts. – President of Majestic Asset Management, LLC Brian Lezak

According to Lezak, Majestic Asset Management, LLC plans to present an argument in defense of the company in court.

“We intend to discuss these facts openly when given the opportunity to do so in the proper forum,” Lezak said, “We will defend our position in court which is the proper place and one which will ensure that both sides are given an opportunity to present all of the facts.”

Williams said he believes Majestic Asset Management, LLC should pay the tenants the relocation benefits he thinks they deserve.

“In my mind either they should comply because they are required to do so, or because it is the right thing to do. Either way it was the intent of the county ordinance to cover situations like this,” Williams said.

Williams said evictions such as these can be a result of maximization of rent returns by all I.V. landlords, which can create discrimination problems in I.V. against low-income residents.

“The diversity of having families a part of Isla Vista is something that can mitigate some of the public safety concerns,” Williams said. “The most interesting, the most safe, and the most thriving neighborhoods are ones that have demographic diversity, and one of the challenges we have in Isla Vista is increasing demographic concentration.”