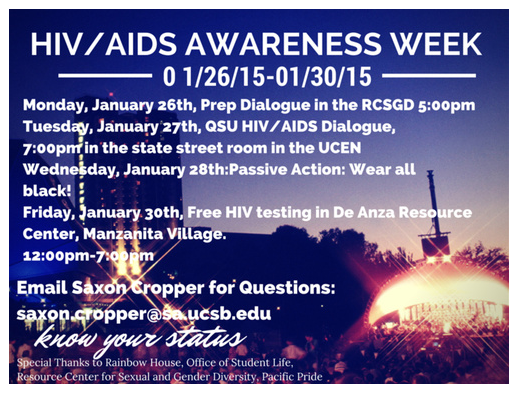 Monday marked the beginning of HIV/AIDS Awareness Week, an event hosted by various campus organizations that aim to educate students about the pervasiveness of sexually transmitted infections worldwide in order to promote local advocacy and action.

Second-year sociology major and residential assistant Saxon Cropper is hosting the event with help from the Office of Student Life Resource Center for Sexual and Gender Diversity, UCSB After Dark, Housing and Community Living, Pacific Pride, Queer Student Union (QSU) and Black Student Union (BSU). Yesterday featured a discussion with Pacific Pride about advancements in HIV/AIDS, and today will include a student dialogue with QSU related to HIV/AIDS and sex traffic workers. Wednesday involves a campus-wide action to wear all black, and on Friday free and discrete HIV/AIDS testing will be provided in De Anza Resource Center.

Second-year English major and BSU member Ricky Barajas said the overall goal of this week is to support QSU and address HIV/AIDS as a significant issue affecting both the LGBTQ+ community and the black community.

“I think that it is very important to recognize the intersections between race and sexuality, because black people account for 12 percent of the population, but over 40 percent of infected people are black,” Barajas said. “BSU supports this event because of how our community is disproportionately affected, and also because we want to stand in solidarity with other organizations and people who are striving to educate and advocate for people affected by this issue.”

My hopes are that the consciousness surrounding HIV increases and that as Gauchos we can come together and make a difference. – Event host Saxon Cropper

Cropper said the weeklong event is meant to send a reminder that HIV/AIDS is an issue that impacts everyone within an afflicted community, both directly and indirectly.

“My hopes are that the consciousness surrounding HIV increases and that as Gauchos we can come together and make a difference,” Cropper said. “We can learn to be more sensitive and finally learn to protect ourselves.”

“By social stigma, I mean that within spaces, people have made HIV a social taboo,” Cropper said. “People should know that HIV is not a death sentence and that there are people living with HIV who are living healthy lives.”

Getting informed is the most important factor for ensuring the longevity of students with or without AIDS. – First-year economics major Derrick Duren

Third-year feminist studies major and QSU co-chair Roger Gonzalez said the event provides an opportunity for the university to support victims of HIV/AIDS in addition to participating in the annual AIDS walk.

“Santa Barbara has an annual AIDS walk, but UCSB doesn’t have anything to do with it so it’s important especially for college students because it’s important for us to be aware of it on our campus and help out those who do have HIV or AIDS,” Gonzalez said.

According to first-year economics major Derrick Duren, the campus benefits from events like the HIV/AIDS Awareness Week because it supports community members who struggle with HIV and other sexually transmitted infections.

“This AIDS Awareness Week will be an amazing way to enlighten our student body to the reality of living with STIs,” Duren said. “Getting informed is the most important factor for ensuring the longevity of students with or without AIDS.”