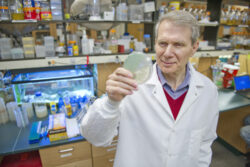 Finding new antibiotics to combat the growing list of antimicrobial-resistant bacteria is crucial to fighting infections and maintaining food supplies. Now, scientists are introducing the first new class of antibiotics discovered in decades, Teixobactin, which is revolutionary not only for its discovery, but also its method of discovery via the iChip.

Kim Lewis, a professor at Northeastern University, collaborated with fellow Northeastern biology professor Slava Epstein, the National Institute of Health (NIH) and the German government. Their research was published in the journal Science on Jan. 7.

The discovery marks a major breakthrough in microbial studies, as many microbes refuse to grow on standard petri dishes. By inserting soil from Maine between two semi-permeable membranes, the team forced soil microbes into growing in a familiar environment. Though only tested against certain strains of antibiotic resistant bacteria, the antibiotic showed no signs of developing bacterial resistance.

“It’s an isolation chamber for many, many bacteria where they can put a single bacteria in each well and then put them back in the soil to let them grow. That’s a very cool technique,” Low said.

According to study results, Teixobactin can target only gram-positive bacteria, because gram-negative bacteria have an extra outer wall for protection. Teixobactin can kill Methicillin-resistant Staphylococcus aureus (MRSA), a strain of staph bacteria that is resistant to common antibiotics as well as other medically concerning strains including enterococci, C. difficle and Vancomycin-Intermediate Staphylococcus aureus (VISA). Teixobactin was ineffective against gram-negative bacteria with New Dehli-metallo-beta lactamase, which destroy beta-lactam antibiotics like penicillin.

“It sounds like a fantastic antibiotic — and it might be. Of course there has not been testing in humans and we don’t know if it’s going to work,” Low said. “Teixobactin could potentially be a great antibiotic, but the most important thing that this group of Kim Lewis’ has done is to develop the technology to go find new ones — to find new antimicrobials. That is extremely exciting.”

Before the iChip, researchers struggled to grow target microbes gleaned from the soil in the lab. According to Low, the advent of the iChip could allow the scientific community to discover more antimicrobials, a concept that is truly compelling.

“Now we have got a tool to hopefully go get new antibiotics. Drug companies have not been able to isolate many new antibiotics at all. Very few antibiotics have been discovered in the past 20 years using biotech approaches so it’s very exciting,” Low said.

The standstill in novel antibiotics has drawn concern, for many bacteria responsible for infections can mutate and become resistant. Both Teixobactin and the iChip method come as welcome news to the scientific and medical communities.

Jenny Du, who received a Ph.D. in Materials Science from UCSB, described the contraption as a bacterial pig-pen.

“These researchers devised a way that they could have the microorganisms in their own little pig-pen, isolated and then slipped back into the medium and the interactions with their neighbors could still be somewhat preserved as opposed to trying to pick it up and grow it in a completely different environment,” Du said. “From that, they found a never seen before, whole new class of antibiotics.”

According to Dr. Low, these antibiotic-resistant superbugs form because bacterial populations are constantly evolving to fight antibiotics. The surviving bacteria become the dominant population and can pass on their genes to other bacteria through horizontal gene transfer.

It is likely that there are low levels of antibiotics in our water supply because of post-antibiotic fluid excretions and poor disposal of antibiotics. Over-prescription and overuse of antibiotics by physicians and patients also add to the problem.

According to Zoe Brown, a second-year UCSB student and Antibiotics Coordinator for CALPIRG, antibiotic use on factory farms further exacerbates the issue.

All these factors combined have lead to increasing cases of “superbugs” that cannot be targeted by currently applied antibiotics.

“Last year, two million people got antibiotic-resistant infections. Over half the staph infections in hospitals are antibiotic resistant. Twenty three thousand people died, and that number will continue to increase if we don’t do something,” CALPIRG Campus Organizer Alena Simon said.

According to Low, voters should revisit laws about antibiotic use in medicine and in the food industry if they wish to slow the progress of resistance.

“When people start dying of diseases they never died of before, you know that we’ve crossed that line. My hope is that we will be smart and people will start reacting,” Low said. “Hopefully the public will demand that we have better food safety, growing the animals in a way that doesn’t involve antibiotics.”

Students can get involved in curbing antibiotic use in factory farms through CALPIRG’s campaign against antibiotics. The on-campus organization is currently targeting McDonald’s, urging the fast food giant to stop using antibiotic-treated meat.