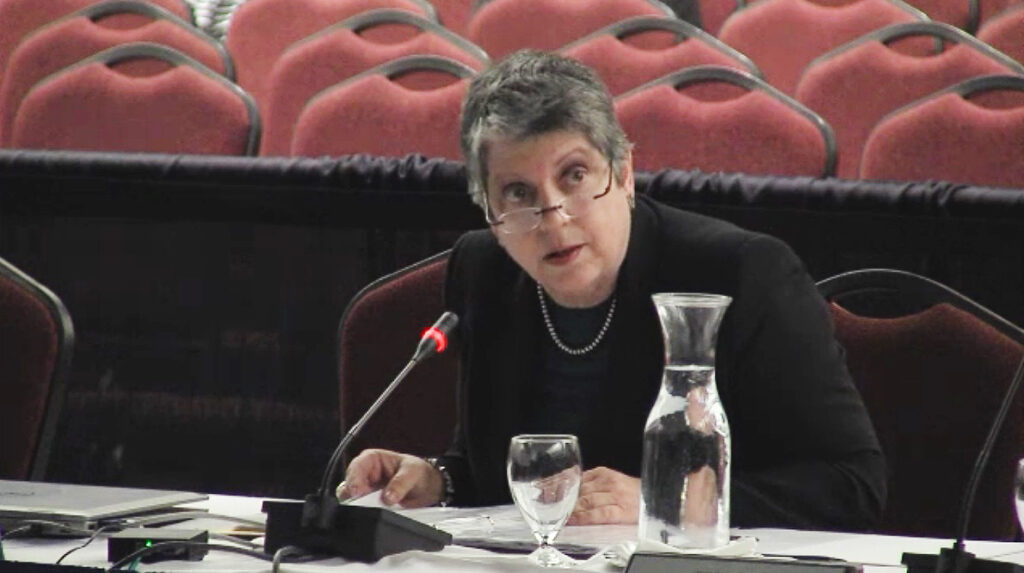 During yesterday’s morning meeting, the Regents discussed primary and secondary education’s vital role in the state’s education system and the UC system’s responsibility to promote education and training for future California teachers. The afternoon session focused primarily on the recently approved tuition increase plan, emphasizing the impact it will have on low income students and families.

According to Regent Bonnie Reiss, large sums of funding for new technology and equipment cannot come at the expense of hiring high quality teachers.

“You can have the fanciest classroom and materials and a teacher that’s not prepared, and the students will not learn,” Reiss said, “or you could have one of the greatest prepared teachers in a parking lot and her students or his students will learn.”

It just feels that whatever used to belong to the normal people of California – assuming the Brown extended family is normal – it’s not available anymore. – California Governor Jerry Brown

“The federal program is a federal teach grant program that provides our candidates $4,000 per year if they agree to teach, either in a high needs school or a high need content area, or they have to teach for four years in an eight year period of time,” Sloan said. “That program has disappeared for the last two years. We are really seeing the impact on our candidates.”

According to Regent-Designate Rodney Davis, the board should consider leaving educational and professional program tuitions untouched by future tuition raises.

“Teachers do not get paid enough, yet they’re continuing to face … increased costs,” Davis said. “Whether or not the proposed tuition increases take place I would like to acknowledge this board gave the President discretion to differentiate in raising any tuition between teacher candidates and other professional school candidates such as law and medicine, and that’s a discretion that I think makes a great deal of sense going forward.” 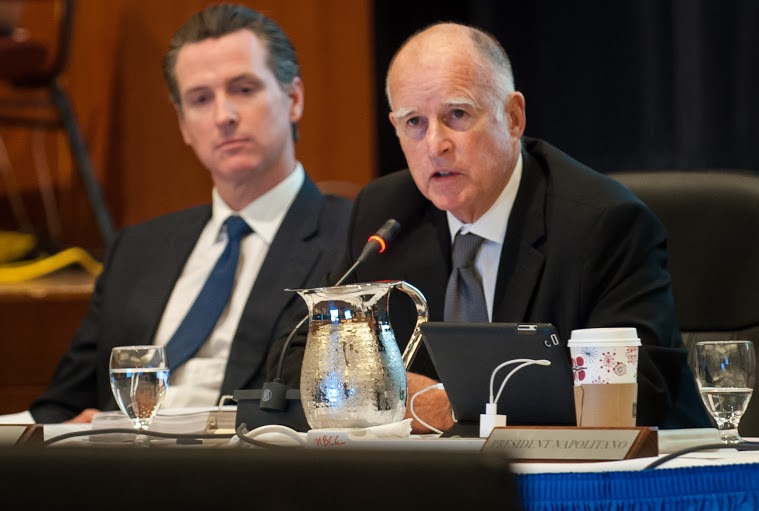 The Regents then discussed the development of new advocacy centers made to help survivors of sexual assault and to combat sexual misconduct on campus.

ASUC Student Advocate at UC Berkeley Rishi Ahuja was part of a task force of administrators and students at the meeting, and said their current goals are to create more campus resources to support survivors of sexual assault at the UC.

“One of the big changes that we’ve really pushed for as a student group is the introduction of survivor advocacy offices across the UC campuses,” Ahuja said. “This is truly important to ensure that survivors have a safe place they can go and voice their concerns in a safe environment.”

According to Ahuja, the office should keep information confidential so the student can be “shielded from litigation.”

“This office will not push survivors to actually move forward in the adjudication process,” Ahuja said, “It will only serve to elucidate the options available and ensure we’re connecting resources to those in need.”

Ahuja also said an increase in funding to UC Berkeley has resulted in an increase of survivors who feel comfortable opening up to campus resources about their experiences.

“Financial support is gonna be key,” Ahuja said. “Like we mentioned, right now having one survivor advocate for 30,000 students at Berkeley is not enough, and we know from the data that as we’ve introduced these positions more survivors feel comfortable coming forward and reporting.”

One of the most concerning numbers I saw was the huge proportion of the acts that are perpetrated against students in their first semester or quarter. – UC Regent John Perez

UC Senior Vice President and Chief Compliance and Audit Officer Sheryl Vacca said the support will be available across all UC campuses, and data will be collected to assess the system.

“Every campus will have a case management team or will at least be identifying a common charter with a common name across the system,” Vacca said. “This team will manage all complaints of sexual misconduct and they will make sure that we have a collaborative approach to the advocate as well as the respondent.”

According to UC Regent John Perez, it is vital that the Regents address the spike in accounts of sexual assaults and harassment that occur during students’ first few months on campus.

“One of the most concerning numbers I saw was the huge proportion of the acts that are perpetrated against students in their first semester or quarter,” Perez said. “And so I think we have a lot more work to do to figure out what sets of dynamics are occurring that have that increased level of victimization especially in the first quarter or semester on campus.”

The afternoon session of the Regents meeting started with UC Executive Vice President Nathan Brostrom’s defense of the recent UC tuition increase plan, in which he said budget cuts are the core of the problem for students as well as for the UC.

“The [tuition] increase has only covered about 40 peercent of the combination of the state cuts and the mandatory costs,” Brostrom said. “Funding from the state on a per-student basis is down about half of what it was 15 years ago.”

UC Provost and Executive Vice President Aimée Dorr then went on to talk about the progress UC has made over the past 10 years. 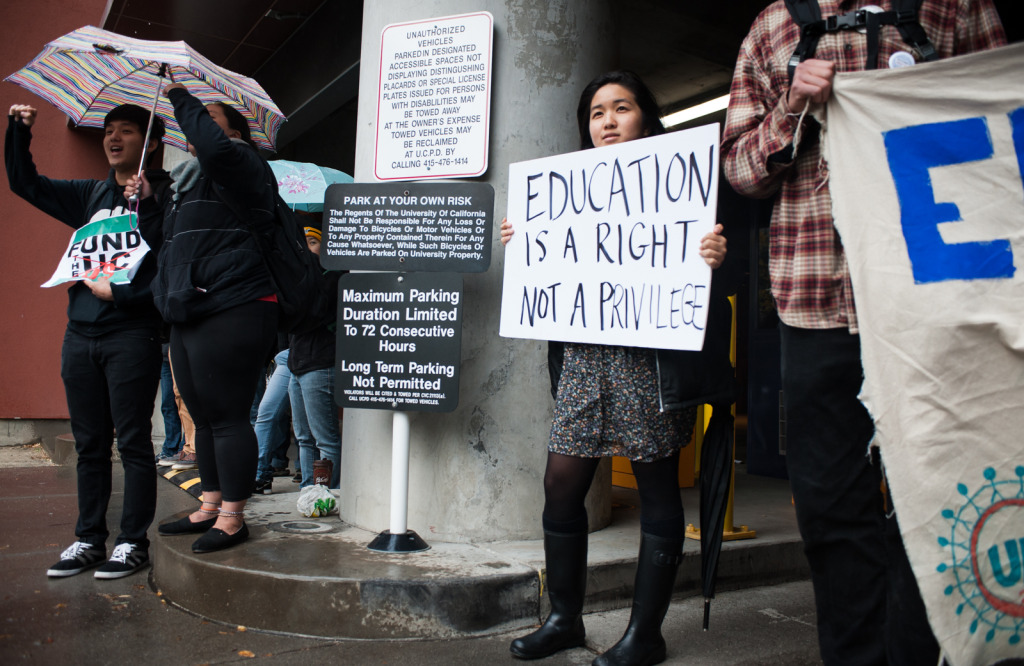 Protesters block an entrace to a parking garage near the UC Board of Regents meeting held in UCSF Mission Bay in November. Kenneth Song/Daily Nexus

“We are well along in several areas,” Dorr said, “and lagging in others.”

Dorr focused on five main areas, beginning with accessibility, stating that the UC has continued to try to adhere to the Master Plan’s guarantee of UC accessibility.

“This means every student who applies and meets the eligibility criteria is offered a seat somewhere in the UC system,” Dorr said. “It is often not the seat that the applicant wanted, but it is still an opportunity for the applicant to receive an outstanding UC education and a very affordable price.”

California Governor Jerry Brown said he is concerned that the UC is now exclusively for international and “4.0” students, stating that many of his family members went to UC Berkeley.

“It just feels that whatever used to belong to the normal people of California – assuming the Brown extended family is normal – it’s not available anymore,” said Brown.

“Even with the tuition increases of the recent past, UC continues to maintain very strong financial aid programs,” Dorr said. “With aid from UC and state programs, more than half of our student undergraduates pay no net tuition, and half of them graduate with no debt. Of those who do borrow and graduate with debt, but the debt level is substantially below than the national average for public universities.”

Regent Russell Gould added that, while the cost bared by students has increased, the cost of college education per-student has actually decreased, largely due to the efficiencies that come with increased enrollment.

“The biggest driver of this is student-faculty ratio,” Gould said. “We added students while faculty was flat or declined.”

Perez, less optimistic about the cost to students in California, pointed out the growth in student debt over the last 15 years.

“There are real numbers of students – that are not insignificant – that have had a real increase of cost,” Perez said.

Regent Eddie Island said it is vital to continue discussion on the complications low-income students may face to graduate so that the UC can strive to mitigate these issues. 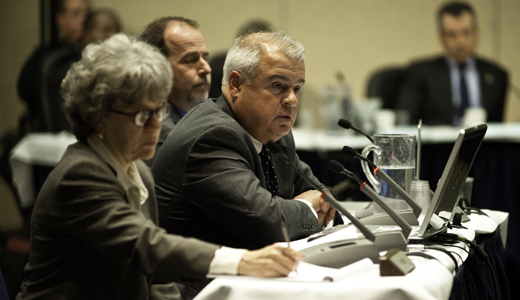 Door then spoke on non-resident tuition. She said the UC has both increased and capped non-resident undergraduate enrollment as part of an overall reform of non-resident admissions.

“Systemwide, we are at 13 percent [non-resident] enrollment now,” Dorr said. “This is still low compared to our peer public institutions.”

According to Brostrom, UCSB has a 10 percent non-resident enrollment, which has a direct effect on acceptance rates for California residents.

“Currently, campuses are gradually reducing California admissions in order to return to enrollment levels that are funded by the state,” Dorr said. “The non-resident tuition is used entirely to support academic programs that benefit all undergraduate students and also to provide additional financial aid for California residents. It has become an important part of how we meet our budgets.”

Brown, however, expressed concerns about the possibility of UC favoring non-resident students because of the funding they garner.

“I also worry about the appearance of selling our educational opportunity to the highest bidder,” said Brown. “I want to make sure that we are not displacing California students as we do this. That would be an awful thing, and I can’t help but have a sinking feeling – except for the information we have on UCLA – that displacement has to occur.”

According to Dorr, non-resident students do not get special treatment due to their financial significance during the admissions process.

“All non-resident admits for a campus must meet all of UC’s eligibility requirements and, in addition, must have the academic qualifications that are at least as good as the California resident students that are being admitted to that campus,” said Dorr.

“There is very much the question of finding the right tuition levels for non-resident students,” said Dorr. “Non-resident tuition for UC is already among the highest in the nations, and we want not to set it so high that we lose applicants.”

A version of this story appeared on page 3 of the January, Thursday 22, 2015 edition of the Daily Nexus.