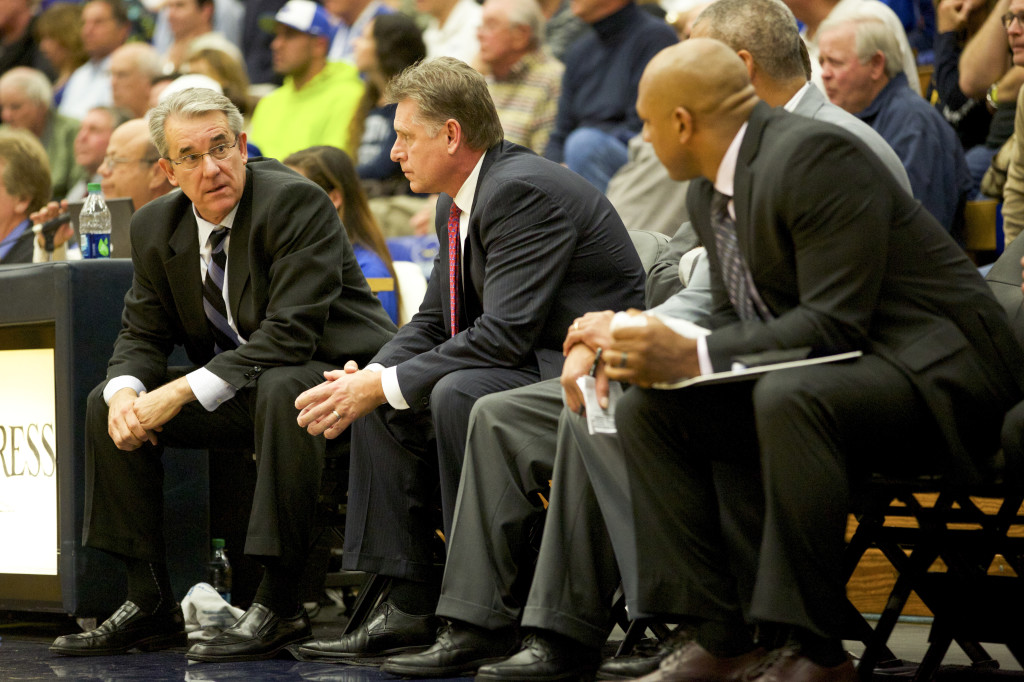 In order for UC athletic coaches to earn bonuses, their athletes will be required to perform well in the classroom as well as in competition. according to a new systemwide policy going into effect today. Daily Nexus File Photo

Under a new policy proposed by University of California President Janet Napolitano made public last Friday, the academic achievements in addition to physical performance of UC student athletes would determine the coaches’ eligibility for bonus payments if the plan receives approval from the Board of Regents.

Based on the new policy, coaches will only earn bonuses to their salaries if their team succeeds on the playing field and if team members stay in school with a minimum GPA of 2.0 with a full-time course load. This policy will apply to new coaches as well as coaches whose contracts are up for renewal.

The National Collegiate Athletic Association (NCAA) devised the method for use in deciding whether or not the intercollegiate coaches will receive the bonus. Under the framework, each academic year that a student stays in school and maintains their GPA with a full course load, the NCAA will give them a certain number of points toward a tally for students called Academic Progress Rate (APR).  The school must receive a minimum of 930 points over four years for coaches to receive their bonuses and for teams to be eligible to participate in championships.

Anything that a school can do to promote academic achievement of student athletes overall is a positive thing. – NCAA Associate Director of Public and Media Relations Michelle Brutlag Hosick

UC Office of the President (UCOP) spokesperson Dianne Klein said she recognizes students should maintain not only their athletic achievements but also reach their academic goals.

“This was a priority of hers [Napolitano] and she believed, as we all do at the university, that in the term ‘student athlete,’ the term ‘student’ comes first,” Klein said. “While we are wholeheartedly in support of winning teams, we also are just adamant that athletes already get a good education. These goals are not incompatible.”

According to men’s basketball coach Robert Williams, going below the NCAA minimum of 930 puts student athletes in “jeopardy of losing scholarships and in jeopardy of post-season play.” Williams said it is the responsibility of the coach to ensure that the APR is reached, and that it is more important for student athletes to retain sports scholarships than for the coaches to receive bonuses.

“As a coach is it your obligation to recruit people and oversee their academic progress to maintain eligibility,” Williams said. “The fact that you have an APR rate that can drop below a 930 can cost you scholarships and student athletes. It can cost opportunities for incoming student athletes. That’s a bigger deal than the bonus structure at UCSB.”

As a coach is it your obligation to recruit people and oversee their academic progress to maintain eligibility. – Robert Williams, men’s basketball coach

Williams said this policy will not have as much of an impact on the university as it will have on UC Berkeley and UCLA, because coaches at other UCs are not comparably paid as UC Berkeley or UCLA sports teams.

“Really this isn’t about Santa Barbara,” Williams said. “This is about UCLA and UC Berkeley. The basketball coach at UCLA makes close to $3 million a year. What’s part of that $3 million is that does he has that $5,000 bonus if he wins the national championship. That’s not how it’s done at Santa Barbara … We don’t play in the same games financially.”

NCAA Associate Director of Public and Media Relations Michelle Brutlag Hosick said the new policy will have a widely beneficial impact on the UC campuses.

Second-year baseball player and economics and accounting major Dempsey Grover said his team would not have any problems with this new policy.

“I know for a fact that in the fall quarter for the past two years the total average GPA was over a 2.0 and we are all required to do at least 12 units,” Grover said. “Not only is it possible but we’ve done it two years in a row.”

“The coach of staff is pretty honest about our grades,” Murphy said. “He makes sure that we all have above a 2.0 and there are plenty of guys on the team that achieve that and more.”

[Correction: A previous version of this article incorrectly stated that the pay policy went into effect today. That is incorrect. The policy was presented by president Napolitano for approval by the board of Regents. The article has been updated accordingly.]

A version of this story appeared on page 4 of the January, Thursday 22, 2015 edition of the Daily Nexus.