The Daily Nexus
News
A.S. Senate To Redefine “Honorarium” Standards
January 22, 2015 at 5:00 am by Juliet Bachtel 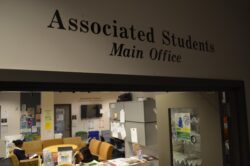 The Associated Students Senate tabled plans to redefine “honorarium” to meet Internal Revenue Service (IRS) standards at the A.S. Senate meeting last night in light of a closed IRS investigation from 2013 which concluded that A.S.’s definition of “honorarium” is unsatisfactory to IRS standards.

A.S. gives monetary rewards to students for their community service work within student government throughout their different committees and boards. This differs from the common salary of a student worker because students who are awarded honorariums do not have a set work schedule or work hours. By definition, honoraria is payment given for professional services that are rendered nominally without charge.

A.S. President Ali Guthy said the association has been working on a solution to meet IRS standards since the investigation closed in 2013.

“The IRS had an issue with the way A.S. was paying its students in honorarium in comparison to the student staff,” Guthy said. “They weren’t satisfied with what it meant to be an honorarium student vs. a student staff member. So the bill that is on the table, defining what it means, ‘honorarium,’ will be happening so we can give the IRS the proper definition to satisfy them.”

Honoraria by definition is basically a gift or token of appreciation that students give to each other when they work on association matters. – A.S. Executive Director Marisela Marquez

According to A.S. Senator Jimmy Villarreal, the IRS questioned the amount of work needed to receive an awarded honorarium payment.

“Part of Program Board’s job is to put on events that happen at a set time,” Villarreal said. “So the IRS questioned whether that was enough to be considered a controlled work environment. Our A.S. Executive Director Dr. Marisela Marquez has settled the matter with the IRS. There is a bill being presented at Senate that defines honoraria, which should close the issue.”

A.S. Executive Director Marisela Marquez said she is responsible for advising students to fix the problem and that the IRS concluded their investigation last year.

“I have the same role I have for every association. I’m the lead staff member so I deal with everything with legal matters and advise the students to go about fixing it,” Marquez said. “The IRS concluded their determination in 2013, and we appealed it, but got rejected. And now where trying to correct it for how they sought out. They are not actively pursuing this anymore.”

According to Villarreal, A.S. is in frequent contact with the IRS because it is a notably large entity with a high number of employees, all of whom are compensated in various ways.

Marquez said the IRS wants A.S. student employees to be paid fairly in comparison to other student workers.

According to Villarreal, the difference between student workers and students who receive honoraria is dependent on their work schedule.

“The difference between employees on payroll and honoraria receiving students is employees have set hours and their work environment is controlled  while honoraria students can work whenever it fits in their class schedule,” Villarreal said.

There is no scalable calibration to determine the exact monetary difference between honoraria-paid students and student workers, Marquez said, although the payment methodology between the two types of payment is definably different.

“They’re not on a scale,” Marquez said. “They’re not paid per hour like student employees are. Honoraria by definition is basically a gift or token of appreciation that students give to each other when they work on association matters.”

A version of this story appeared on page 6 of the January, Thursday 22, 2015 edition of the Daily Nexus.