The Daily Nexus
News
Obama’s State of the Union Touches on Local Issues
January 21, 2015 at 4:08 pm by Peter Mounteer and David Jackson 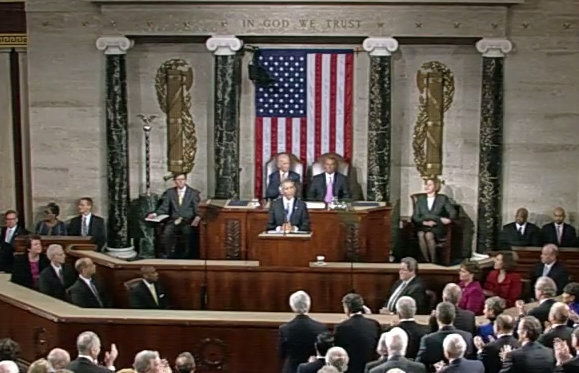 President Barack Obama takes his place in front of Congress for his 2015 State of the Union address as Vice President Joe Biden and Speaker of the House John Boehner. Photo courtesy of the White House

President Barack Obama delivered his second-to-last State of the Union address to a joint session of Congress last night and touched on the economy, defense, education, tax reform and energy.

The president urged further investment in renewable energy technology and a shift from foreign oil and oil production subsidies, claiming such measures can lead to a “safer” planet. He also announced an impending executive order to require federal contractors to pay federal employees a minimum wage of $10.10 per hour and encouraged the passage of a bill to ensure equal pay for men and women across the country.

The president expressed confidence in the opening lines of his speech and said the U.S. economy has improved significantly in the last several years.

“America, for all that we’ve endured; for all the grit and hard work required to come back; for all the tasks that lie ahead, know this: The shadow of crisis has passed, and the State of the Union is strong,” Obama said. “At this moment  — with a growing economy, shrinking deficits, bustling industry and booming energy production — we have risen from recession freer to write our own future than any other nation on Earth.”

College Democrats president and Trinity University student Natasha McKenzie released a statement following the speech stating that she shared the president’s vision for the economy.

“The proposals President Obama laid out tonight are game-changers for America’s young people. We share his vision for an economy that works for everyone — not just the well-heeled and well-off that have political influence,” McKenzie said. “All we’re asking for is a chance to have meaningful careers and make a difference, and to know that rules aren’t stacked against us.”

“I think he attempted to make up for his numerous foreign policy failures by offering a myriad of substitutes to the American people such as ‘free’ community college, affordable child-care, and a higher minimum wage,” Gilbert said in an email. “He did this without detailing how much taxes will need to be raised in order to accomplish any of it, which is no surprise. All I can hope is that Republicans will make good on their promises to oppose these plans in spite of his veto threat, and more importantly come up with more practical ideas to replace them.”

Richard Martinez, father of Christopher Michaels-Martinez, a UCSB student slain in the 2014 Isla Vista mass murder, accompanied Santa Barbara Congresswoman Lois Capps to the Capitol and said he thought the president will have trouble getting gun violence bills passed in Congress.

“The president has got a problem … with trying to get anything done in this Congress,” Martinez said. “We should try for a better political climate and try and get something done and that’s been the problem with gun violence … we can do better.”

In addition, Capps said it would depend on action by the legislature to push Obama’s proposal to provide free community college to students who maintain a 2.0 grade point average.

“It’s one thing for the president to speak about this, but it’s really not going to happen unless Congress comes together and acts on it,” Capps said.

Capps also said the president’s efforts to move away from dependence on fossil fuels could have an impact in Santa Barbara County.

“What I have done on that arena is something that I will reintroduce in this session of Congress as well, is to make fracking … more transparent,” Capps said. “It goes down the line of what are the ingredients, what impact does it have on groundwater and agriculture. To me it’s a good first step to get the ball rolling on the national level.”

The 2015 State of the Union address can be viewed on the White House’s YouTube account with infographs and photos prepared by the Obama administration.