The Daily Nexus
Fine Arts
Mother and Daughter Duo Share Dance of India
January 21, 2015 at 6:00 am by Sophie Ho 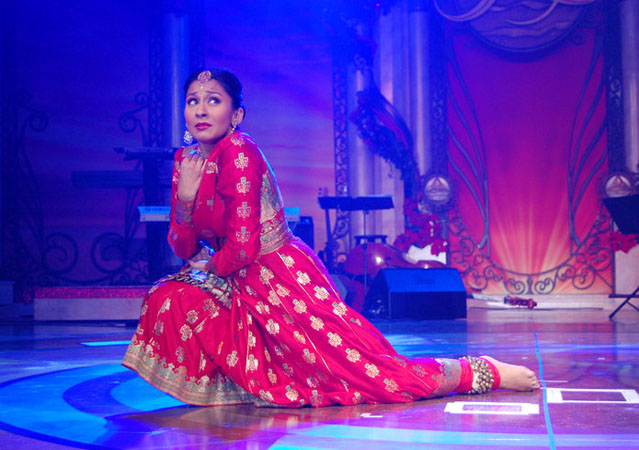 Dressed in a gown embellished with hundreds of golden bells attached to the ankles, the barefoot dancer extended her hands to the audience as if flipping to the first page of a narrative and articulating “Once upon a time…” On Jan. 14, fellow UC graduate, dancer, choreographer, actor and vocalist Amrapali Ambegaokar, along with her mother and guru Anjani Ambegaokar, took their quest in sharing the essentials of the classical Indian dance Kathak to UCSB’s Hatlen Theater as part of the week of Indian film and contemporary performances.

Kathak, Sanskrit for the art of storytelling, invites the audience into India’s sacred texts of mythological tales while dancers, supposedly in a state of ecstasy during the performance, circuit into the characters themselves. Though originally inspired by religion, this dance focuses mainly on the aesthetic aspects of the Islamic culture, hence the dazzling ensemble consisting of a mughal, a tight-fitting dress at the upper body and a rounded out bottom to produce flare when spinning, and layered underneath, a churidar, an under-layer to cover the legs. The delicate hand gestures and exaggerated facial expressions contribute to aesthetic appeal and animate the storytelling. Another theme throughout Kathak is briskness. Vigorous, rhythmic footwork combined with the attached bells creates complex, synchronized rhythms.

Amrapali initiated the night with a routine called “Ganesh Vandana: An Invocation to Lord Ganesh” which covered the essential elements of Kathak perfectly. She began center stage with two lights; one on her and the other on a bowl of fruit strategically placed stage left. The story in this number is based on the praise and gratitude to Lord Ganesh. She offered him fruit, but only after testing it herself. Her expressions showed the plot; a sheepish look when faced with the Lord Ganesh and an empowered smile when the deity has accepted the offering. In celebration of Lord Ganesh’s acceptance, she moved merely two feet away from the edge of the stage to perform the toda, a rhythmic cycle of beats crescendoing to a silencing halt.

Later on in the evening, Amrapali shifted to a more contemporary perspective, appealing to the younger generation of the audience. She performed her self-choreographed piece to the Golden Globe Award-winning R&B song “Glory” by John Legend ft. Common. Changed into a midnight blue gown, Amrapali emitted intense emotion throughout to lyrics such as “They say, “Stay down” and we stand up/Shots, we on the ground, the camera panned up/King pointed to the mountain top and we ran up.”

Her mother Anjani mentioned later in the evening that the two try to mold the art of Kathak to the audience’s interests in every performance. The reaction of pre-bio first-year Donald Huynh is proof to the success of that appeal. “I was at first surprised when the John Legend number came out of nowhere, but when the song ended, the line between Kathak and modern dance was almost indistinguishable! I appreciate the fact that they understand that different generations have different styles,” Huynh said.

With 60 years of unrelenting passion for her art under her belt, Anjani also had her moment of stardom that night, performing several numbers, one of which is about a woman’s lover who has not returned due to a horrendous storm. Characterized as the grieving woman, Anjani showed her sorrows through her expression as well as her praying hand gestures. Most of this piece was in a moderate tempo, as compared to her daughter’s numbers, which was fitting for the somber storyline.

Though both hold high stature in their art, Amrapali claimed in a panel interview after the show that “my dad tells me I’m fast, but he also tells me that when my mom was younger … now that was fast,” embedding a little humor and daughterly love into the evening.

In a constant reach for her mother’s artistry, Amrapali reminisced in the interview “I had 5:30 morning practices when I was still in high school. The sun’s not out yet! Eventually, I started seeing the fruits of it. Being the child of an artist, there’s always two sorts. On one hand, you get great exposure to incredible opportunities at a young age and if you do well and you prove yourself, those [opportunities] can become yours for your lifetime.”

Amrapali concluded with a settling self-realization. “I think I found myself through dance, through performing; I found my voice and I found my talent. It helped shape and form who I am as a person.” Amrapali and Anjani Ambegaokar have successfully taken many on an emotional and spiritual journey to the realms of Kathak.

In a beautiful coincidence that evening, while Amrapali was delicately moving her arms and creating hand gestures, the lighting formed shadows along the theater walls, reminding us of India’s multiple-armed deities and the asceticism and sacredness of the art of Kathak and of India’s culture.