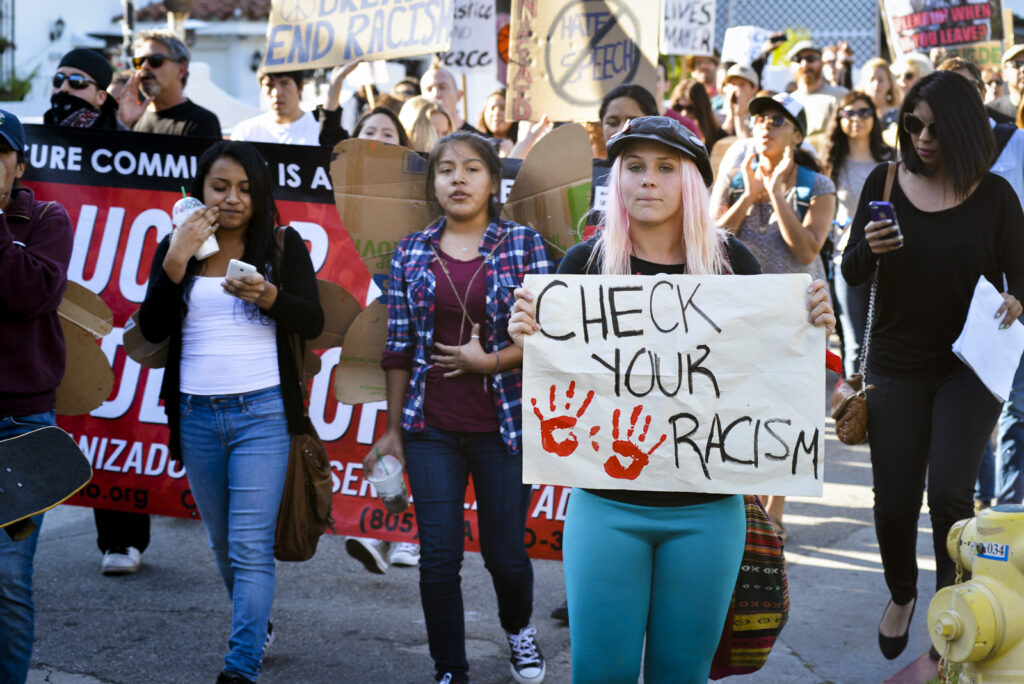 Community members protest the Santa Barbara News-Press’ use of the term “illegals” and also speak out for human rights and equality. Cameryn Brock/Daily Nexus

The opposing demonstrations come after the Santa Barbara News-Press published an article on Jan. 3 with the headline “Illegals line up for driver’s licenses,” regarding the recently implemented California Assembly Bill 60, a law which allows Californians to apply for driver’s licenses, regardless of immigration status. Following a protest from local minority advocate group People Organized for the Defense of Equal Rights of Santa Barbara Youth (PODER) calling for a retraction and apology, which the paper refused to grant, the News-Press also published a front-page story on Jan. 16 with the headline, “Driving legal opens door to illegals’ past.” We the People Rising, a group of volunteer secure border advocates based in Claremont, staged a demonstration in support of freedom of speech, while PODER led a demonstration — the second held by the group in the last month — against the newspaper’s use of the term “illegal.”

Protesters with PODER shouted “We are beautiful, migration is beautiful!” and “Undocumented, unafraid!” while We the People Rising held signs reading “Illegal there I said it!” and “Freedom of expression, defeat censorship,” emphasizing the correctness of the term “illegal” to describe undocumented immigrants. We the People Rising also read sections of the U.S. Constitution out loud, recited the Pledge of Allegiance and the Preamble of the Constitution and sang the Star-Spangled Banner. 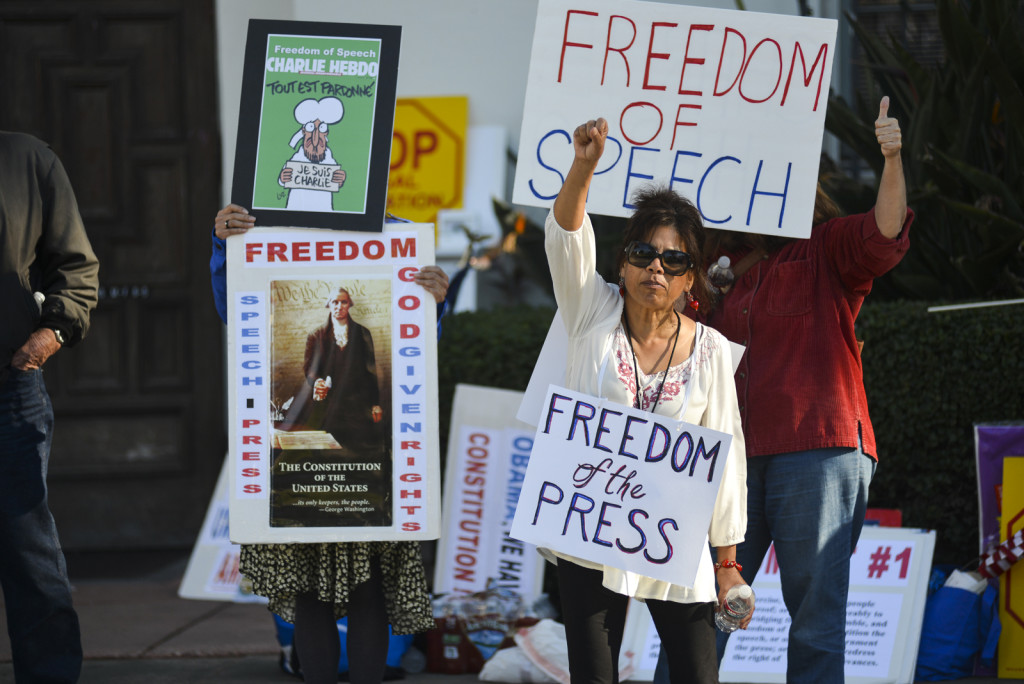 News-Press supporters claimed freedom of speech/press as validation of use of the term “illegals.” Cameryn Brock/Daily Nexus

“When I saw that word ‘illegal’ in the Santa Barbara newspaper, you know, that has so much baggage, that has so much evil baggage, and I believe that must have incredible baggage for our whole immigrant community,” Rodriguez said.

Rodriguez also said that despite the newspaper’s recent actions, support for the undocumented community has continued to highlight the vital and “foundational” role undocumented individuals play in Santa Barbara. 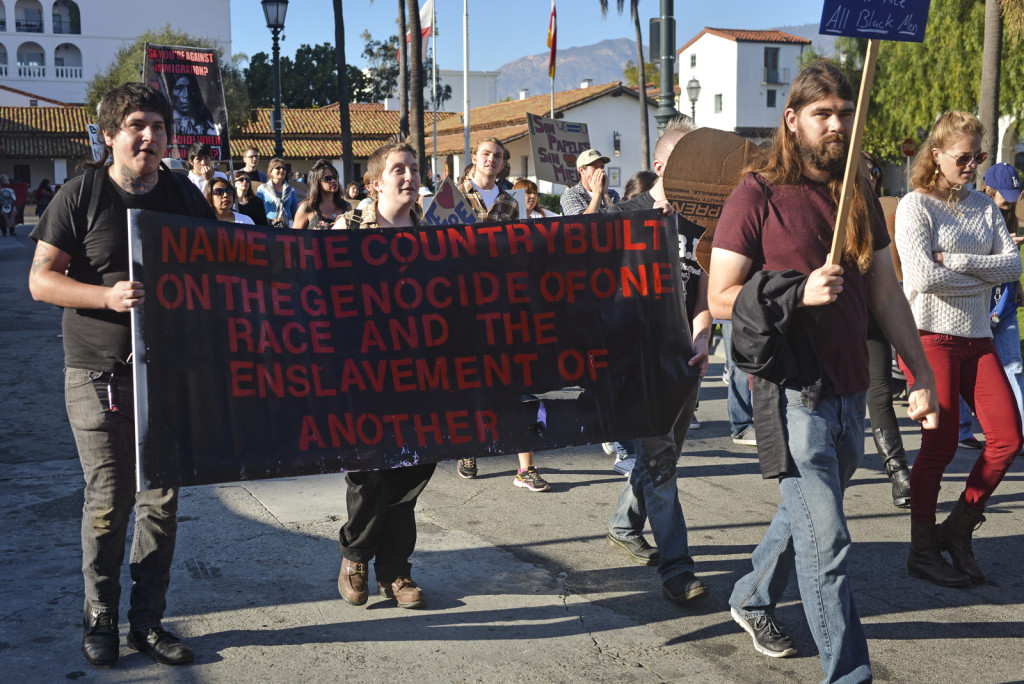 According to Chicana/o studies professor Ralph Armbruster-Sandoval, the campaign against the News-Press is inspired by historical and contemporary struggles over language, citing a lengthy history of controversy among different minority groups over the language used to describe them.

“The civil rights movement made us stop saying ‘colored’ and worse [terms]. The women’s movement changed newspapers standards to use the word ‘Ms.’ The LGBT community got homosexual replaced with ‘gay’ and ‘lesbian’ and ‘queer’ and most recently the disability rights movement is requesting us all to stop using the ‘r’ word,” Armbruster-Sandoval said. “Ours is not the first generation to debate the ‘i’ word.” 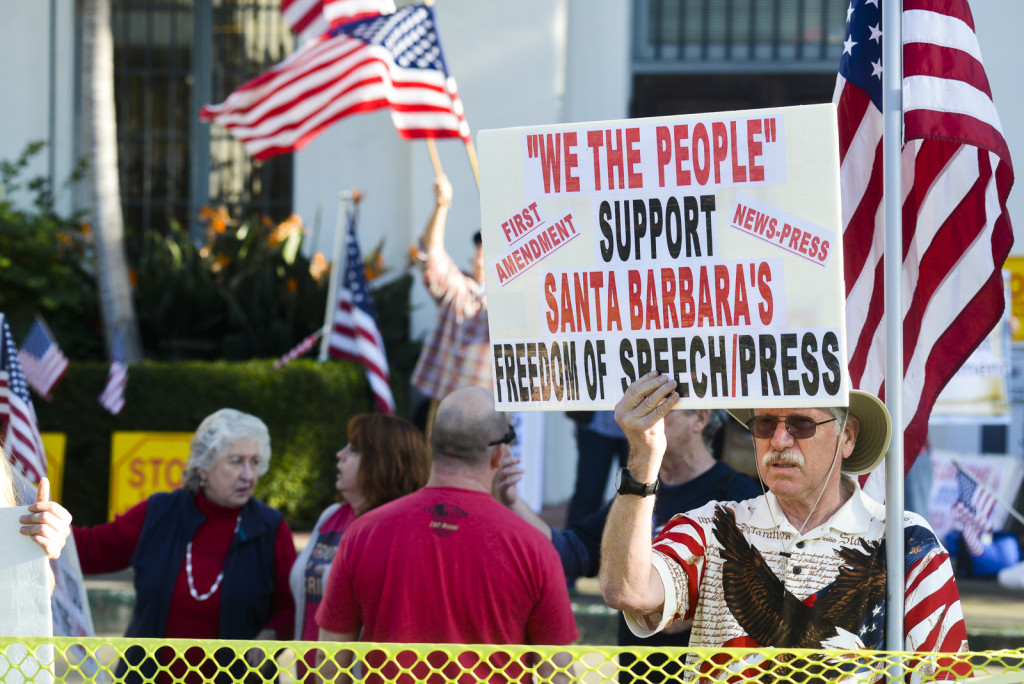 Jamiel Shaw Sr., a protester with We the People Rising, said his son Jamiel Shaw Jr. was murdered in 2008 by an “illegal alien,” and invoked Martin Luther King Jr. in his defense of the News-Press. 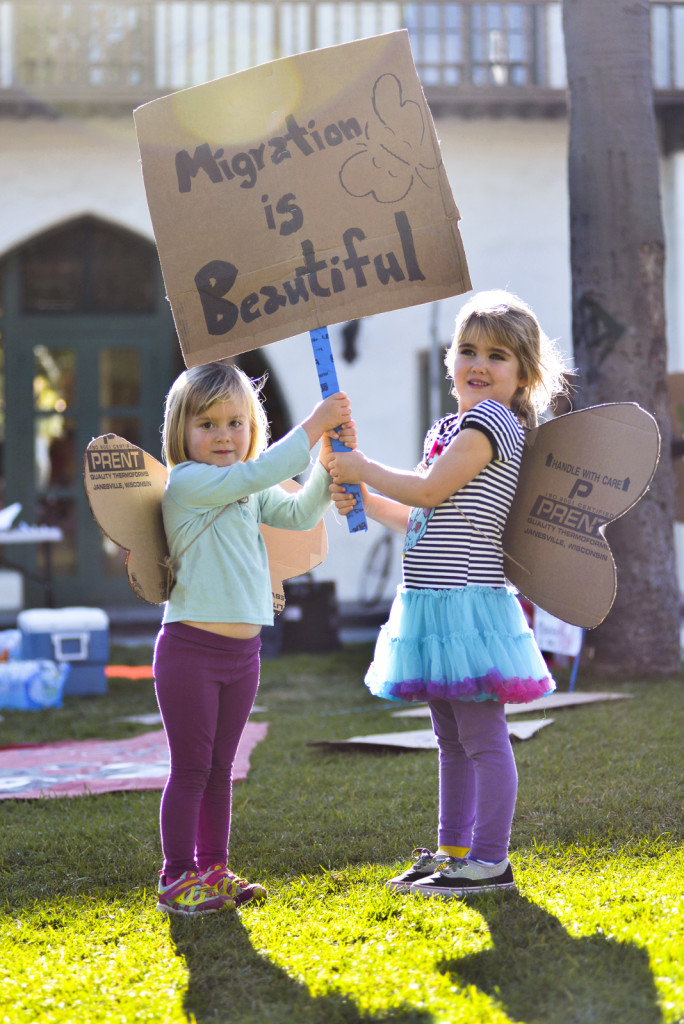 Candice Somay, a protester with PODER, said the experiences of undocumented individuals coming to the U.S. from south of the border are comparable to the annual journey made by monarch butterflies crossing the U.S.-Mexico border.

Legal Immigration = Good for America! Illegal Immigration = Bad for America! We have immigration laws and policies in place to ensure those allowed to move and work here benefit American society. Being pro-American and anti-illegal immigration is not a race issue, it is a legal issue. Playing the race card at pro illegal immigration protest is inaccurate and frankly it has been played out. Also playing the “family” card has been played out. It is very bad parenting moving to a foreign country illegally, then have children in the country you entered illegally, then demanding rights for your criminality… Read more »

That’s a long list of statements without any kind of evidence. And before you say it, common sense isn’t evidence. If it’s obviously true then it shouldn’t be hard to prove.

When these “beautiful butterflies” start paying taxes they can fly all they want.

And the peer advisor of the Chicano/Chicana studies department needs a crash course on the constitution. Under the First Amendment, individuals do have a right to speech that the listener disagrees with and to speech that is offensive and hateful.

Some may not like it, but that doesn’t mean they should be banned from saying it.