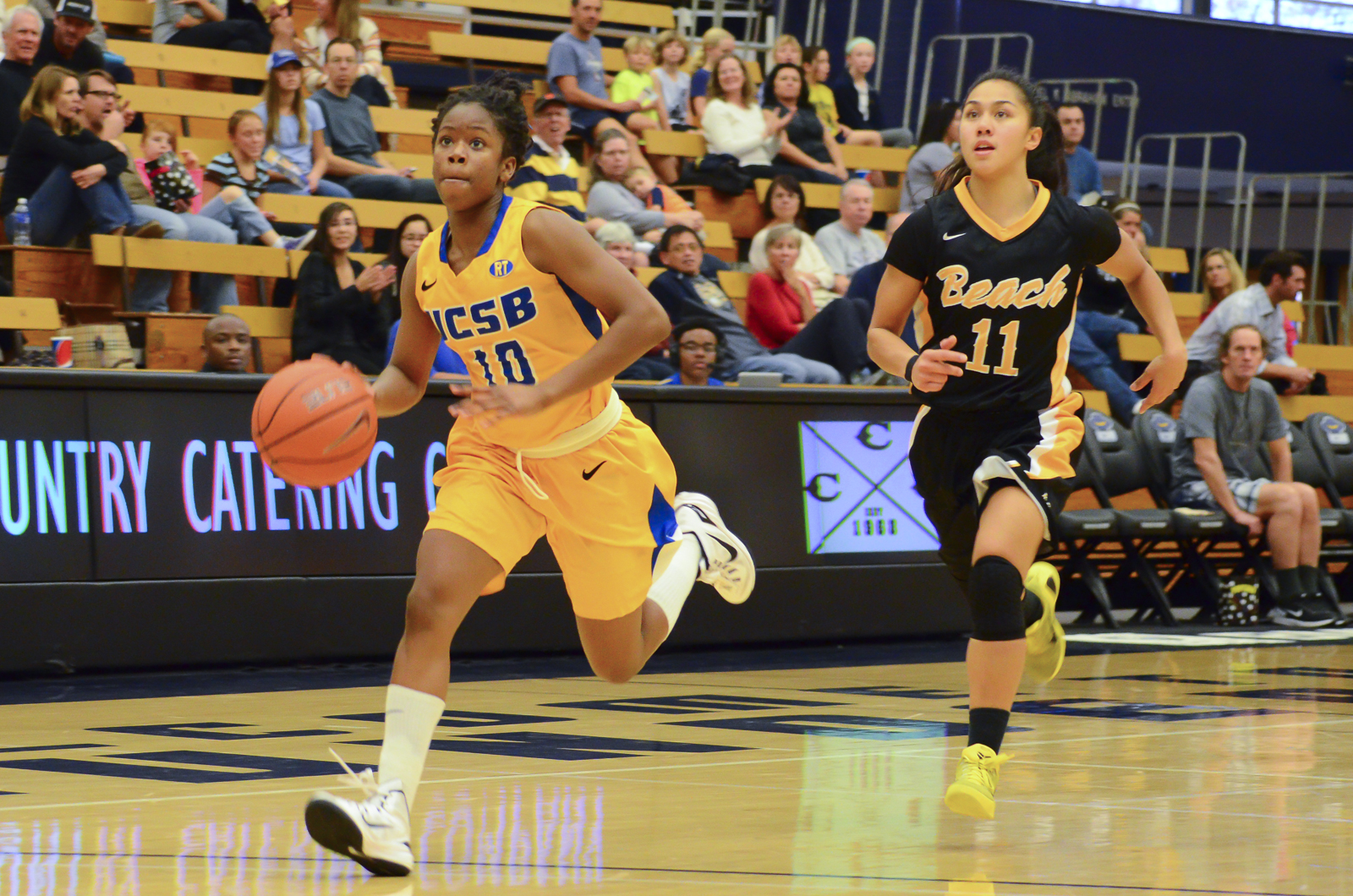 Playing against Long Beach State, Onome Jemerigbe dribbles the ball to the opposite side of the court. Christina DeMarzo/Daily Nexus

Things didn’t get any easier for the struggling UCSB women’s basketball team this past weekend as it suffered a pair of blowout losses to the Big West’s top two overall records. After dropping Thursday’s road game at Cal State Northridge 84-48, the Gauchos returned home where they were dominated by Long Beach State, losing 81-44.

With two more losses, UCSB has now fallen to 0-16 on the year and 0-3 to start conference play. After defeating the Gauchos, Northridge went on to lose at Cal Poly on Saturday as it moved to 12-6 overall and a disappointing 2-2 in the Big West. The 49ers, who have been nearly unstoppable all season, were perfect over the weekend, improving their record to 17-1 overall and 4-0 in conference.

In UCSB’s Youth Night on Saturday, the Gauchos found themselves in a favorable position midway through the first half as they stole momentum from the Big West’s hottest team in Long Beach State. Junior forward Kendra Morrison got the run started with a pair of jumpers and freshman guard Makala Roper knocked down her first of three triples in the game as UCSB played its best five-minute stretch of the weekend. A pair of buckets by sophomore point guard Onome Jemerigbe capped an impressive 13-3 run, giving the Gauchos their only lead of the game at 19-18.

Roper went on to finish the night with a career-high 15 points on 3-5 from downtown on the night as she continued to shine as the team’s top shooting threat.

Unfortunately for Santa Barbara, as has been the case for much of this season, it was unable to sustain its stretch of solid play. The 49ers immediately answered back with a 20-2 run of their own to take control of the game. Long Beach took a 41-20 lead into halftime after knocking down 7-13 three-pointers in the first half.

UCSB struggled to handle Long Beach’s pressure for most of the game, resulting in a 16-6 difference in steals in favor of the 49ers. The visitors finished off the Gauchos with a hot shooting second-half, making 55 percent of their shots as they went on to win 81-44.

It was another efficient night from Jemerigbe, who turned in 10 points on 4-5 shooting with a team-high five assists. On Long Beach’s side, sophomore guard Raven Benton and senior guard Alex Sanchez led the way with 17 and 16 points, respectively.

Thursday’s away game against Northridge told a similar story, as the Gauchos used an early 9-0 run to pull within a point at 16-17 midway through the first half. Just like on Saturday, UCSB was unable to keep momentum as the Matadors used a 17-0 run to blow the game open.

Offensively, Northridge could not be stopped as it went on to shoot 57.4 percent for the game and knock down ten three-pointers, both good for second-best in program history. The team also put in a season-high 26 assists as it went on to win in dominating fashion, 84-48.

Freshman center Tessa Boagni put in a career-high 17 points to lead all scorers on 8-11 shooting to go with a game-high eight rebounds.

One of the Gauchos’ biggest weaknesses all year was exploited once again as it allowed both the 49ers and the Matadors to shoot 50 percent from three-point range, going 18-36 overall.

UCSB will continue its search for win number one this Thursday against UC Riverside.