The Daily Nexus
News
Community Examines History of I.V., Self-Governance
January 16, 2015 at 2:05 am by Noah Brennan-Greenbaum 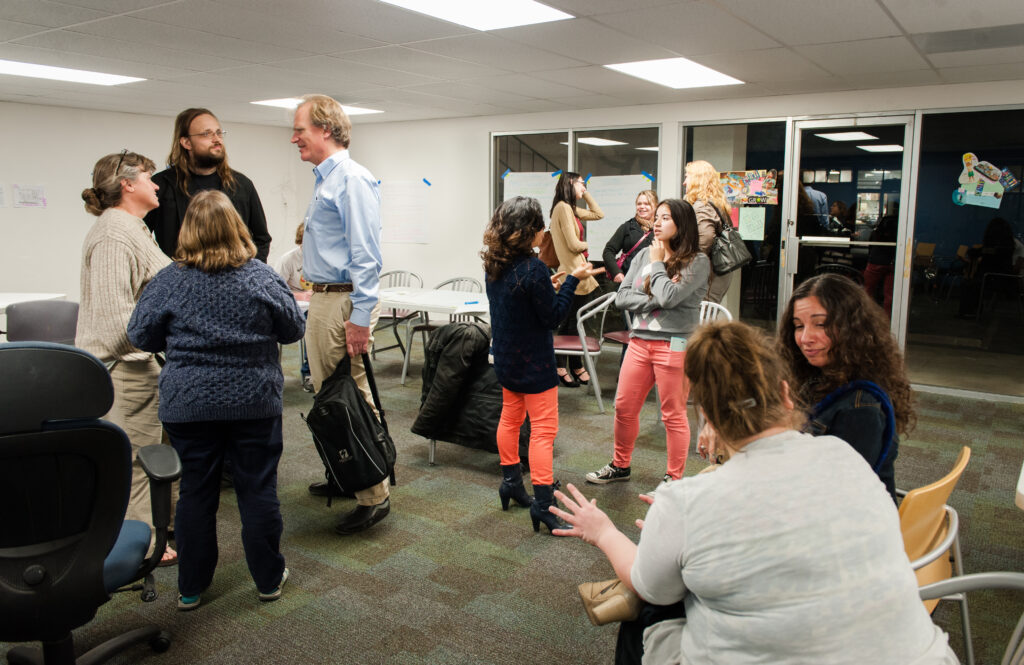 Community members met at the Isla Vista Clinic on Thursday Jan. 15 to discuss the history of Isla Vista, and the movement toward self-governance. Lorenzo Basilio/Daily Nexus

Students, faculty and Isla Vista residents met at the Isla Vista Clinic on Embarcadero del Mar yesterday to discuss the history of I.V. as well as problems facing the I.V. self-governance movement.

The event was co-organized by volunteer group Isla Vista Collective, I.V. Coalition and individual residents, students and academic staff. I.V. Coalition member and comparative literature graduate student Shari Sanders led the meeting, inviting participants to list “trials and triumphs” in I.V. history, including the creation of the I.V. Food Co-op, the I.V. Recreation and Park District (IVRPD), I.V. Elementary School and the maintenance of I.V.’s many parks. Other points of I.V history discussed included episodes of violence, sexual assault and what some alleged as the increasing presence gentrification in I.V.

According to physics professor Harry Nelson, who is also a member of the Chancellor’s Coordinating Committee on I.V., there could be problems facing the university if administration tries to intervene in the self-governance movement.

“Spending money from the University of California, not just UCSB, but the entire University of California on a thing like Isla Vista is a very hard thing to do it turns out, at least with public money,” Nelson said. “Every time you think you have an idea, there’s a vetting process, and a consideration, until someone says, ‘You know, local government is the responsibility of something else in California’s organization, not universities.’”

As a public university, UCSB faces regulatory and monetary issues that differentiate it from schools with different funding models, Nelson said.

“UCSB is not a private institution. If we were Stanford it would be totally different,” Nelson said. “There’s totally fewer regulations and requirements. UCSB being public, we have a lot of extra responsibilities with public money.”

Nelson also said there are a great deal of alumni who feel passionately about I.V. and could potentially contribute to improving it.

“One thing that’s interesting about Isla Vista is that over the past 50 years, maybe 4,000 students have come through each year,” Nelson said. “You do the math, that’s 200,000 people out there, predominantly in California, who universally love Isla Vista. That’s a very interesting phenomenon that’s never been tapped into.”

Longtime I.V. resident Constance Brown said she is concerned with the ever-growing population of youth in I.V., a trend that she said she has seen over the past several decades.

“It’s an undercurrent that, if not corrected, I simply have no hope for I.V. And that is, we used to have some hundreds of mature adults living in single-family homes,” Brown said. “And they used to be maybe professionals, two people, families, but they were stable adults.”

According to Brown, an older demographic of I.V. residents would balance out the “craziness” caused by the large population of youth in I.V., a phenomenon she alleges has steered I.V. “out of control.”

“They’re [older residents] virtually gone. There are a handful of us left. But all of those family homes that were a buffer, that created stability, they’re all filled with young people,” Brown said. “You see really nothing but young people out there, and they’re crammed in. Once Isla Vista is wall-to-wall young people, I don’t see any hope for Isla Vista. You cannot contain that amount of young people, all they see is other young people. It’s like Lord of the Flies.”

In addition, fourth-year global studies major and IVRPD Board of Directors member Jacob Lebell said parking congestion might create a climate detrimental to residents if I.V.’s population continues to increase.

“I think what kind of gives people permission to act without rules in many ways is that with parking impacted how it is, a lot of I.V. has the feeling of a parking lot and I think that sets kind of the mindset and the environment that a lot of people are acting in,” Lebell said. “It’s a place to kind of put things. That isn’t community space.”

The meeting was part of an ongoing conversation regarding the I.V. self-governance movement that began last Spring. Future meetings will continue to be held the third Thursday of every month in the I.V. Clinic building.

Regarding the comment of physics professor Harry Nelson, who is also a member of the Chancellor’s Coordinating Committee on I.V., there could be problems facing the university . . . “Spending money from the University of California, not just UCSB, but the entire University of California on a thing like Isla Vista is a very hard thing to do it turns out, at least with public money.”
I’d like to see the documentation that the UC has never spent any money on the communities they reside in.
Carmen Lodise, author
Isla Vista: A Citizen’s History (2008)

I don’t read that Nelson said it was impossible, just that it was hard, Carmen. Perhaps you remember Vice Chancellor for Isla Vista Ray Varley resigned because of all the red tape the Regents bound him up with after the 1970 incidents.