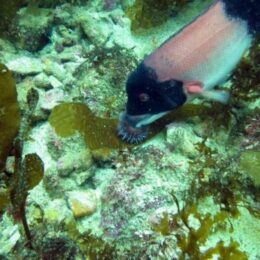 UCSB researchers found that the largest sheephead fish, whose populations are dwindling, are necessary to maintain kelp gardens.

Caselle and Scott Hamilton, a former postdoctoral researcher at UCSB and current faculty member at Moss Landing Marine Laboratories, combined over 30 years of data documenting the population and size of these fish in in the Santa Barbara Channel. This data shows how the size-structure relationship of these sex-changing predators influences Southern California’s marine ecosystems.

“The California sheephead play an important role in our kelp forests because they eat sea urchins,” Caselle said. “Sea urchins in high abundance form urchin barrens, in which they graze down giant kelp forests that are home to many different organisms. What we found was that it is not just about having a lot of sheephead in the environment, it is important to have the large ones that prey on and can handle urchins.”

Because the California sheephead prey on sea urchins, they play a critical role in Southern California’s kelp forests to maintain a habitable and healthy environment for a multitude of organisms. When these predators are heavily fished, however, the size-dependent population structure diminishes and causes a negative impact on predator-prey relations, influencing the marine ecosystem at large.

Caselle combined research from the 1970’s conducted by Bob Warner, a retired professor in EEMB, with new findings using visual surveys and path analysis in order to examine both the direct and indirect effects of the predator-prey relation between sheephead and sea urchins to investigate the greater impact on marine ecosystems over time.

The earlier records showed that sheephead were not commercially fished in the 1970s and as a result the sheephead population flourished. By the late 1990s, a high demand for commercial sheephead fishing grew, cutting not only population size, but also fish size as well. As a result there were fewer fish to feed on the over-growing urchin population.

Yet Caselle said her most recent research indicates that size-structure is increasing once again due to multiple factors, particularly the change of fisheries.

“After 2000, a number of factors came together and fisheries reduced their intake, which was partially related to high gas prices as well as new regulations on the fishing industry,” Caselle said. “So in 2007, the size-structure was increasing once again after the drastic reduction witnessed in the late 1990s.”

An important aspect of sheephead is their sex-changing ability, which makes systems managements more complex and could lead to more serious consequences for their population and place in the food web. Sheephead are born as females and the bigger fish morph into males. Thus, overfishing may threaten to remove the larger male fish out of the population entirely.

Caselle and Hamilton emphasize that management strategies protecting large sheephead, such as marine protected environments and fishing regulations, are necessary to maintain the delicate balance of sheephead and urchins.

“In addition to establishing more marine protected environments, this research could affect how fisheries are managed, specifically in implementing more regulations on size limitations,” Caselle said. “This paper shows that people really need to think about size structure beyond numbers especially because it could have important ramifications for other systems.”

Caselle and Hamilton published their results in the December edition of the Proceedings of the Royal Society B: Biological Sciences.