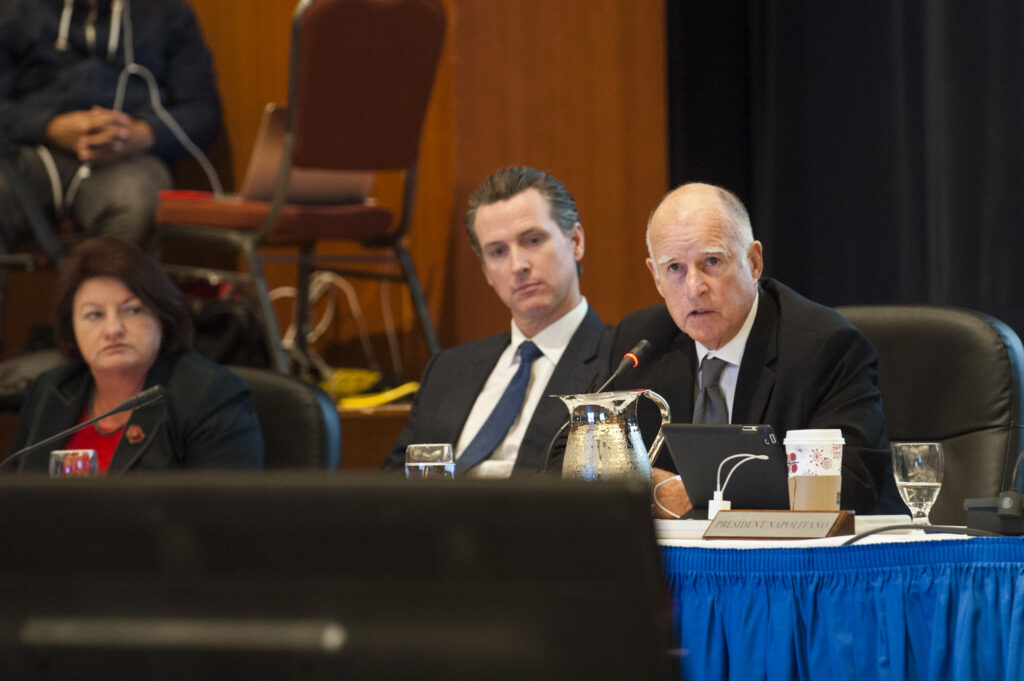 Governor Jerry Brown released a $164.7 billion proposed state budget plan for the fiscal year 2015-2016 on Friday, which includes the $120 million increase for the University of California system he committed to in 2011, but not the $100 million the UC Regents said would be necessary to avoid tuition increases approved in November.

The current $113.3 billion budget proposal, still far from a final one, calls for a total of $61.2 billion — or 54 percent — for education throughout the state in general fund expenditures, with $14 billion for higher education and $47.2 billion for K-12 education. K-12 education is the single greatest expenditure by agency in the current budget, accounting for 41.6 percent of the total budget, followed by health services with 21.3 percent of the total, then higher education with 12.4 percent and then corrections and rehabilitation with nine percent.

Of the $14 billion in general funds for higher education, $3.1 billion — or 22 percent — will go to the UC system and a similar $3.15 billion will go to the California State University system. The rest of the funds, along with revenues from property taxes, will go to community colleges, Student Aid Commission and “other higher education,” including expenditures for the UC Hastings College of the Law.

But these plans were held contingent on the condition that the UC system would hold its tuition rates for students flat for these four years.

Then, in Nov. 2014, the UC Regents approved a plan that could raise tuition by five percent each year — the exact amount contingent on the varying amount of state funding and support for the UC system. In order to completely avoid the tuition increase outlined in this plan, the universities would have needed an estimated $100 million more than is documented in Brown’s preliminary budget proposal released late last week.

In 2011, Brown offered to provide additional funding totaling $120 million to the UC system at a rate of five percent increases from 2013 through the end of 2015, and an annual rate of four percent increases from 2015 until 2017 under the condition that the UC system held tuition rates flat for these four years.  The UC Regents then approved a plan to raise tuition by five percent each year in November 2014, which could only be avoided if the UC system received roughly $100 million more than the amount proposed in the budget plan released late last week.

According to H.D. Palmer, the Deputy Director of External Affairs at the California Department of Finance, Brown remains committed to his original plan set back in 2011 despite the Regents’ recent decision.

“The Regents have authorized tuition increases, but they haven’t actually implemented it yet,” Palmer said. “I don’t know how much more plain the Governor could have made it in the budget summary. The increase for next year, the four-percent increase for both systems, is contingent upon fees and tuition remaining flat. Period.”

Chairman of the Board of Regents Bruce Varner said this is the beginning of the start of discussions between the two committees, the governor and UC President Janet Napolitano.

“They’re going to engage in a number of very quick discussions and bring in experts to look at things that the university might be doing differently,” Varner said. “That would amount to either revenue enhancement, or cost-cutting or doing things that maybe even improve some of the efficiencies we’ve already adopted.”
Palmer said Brown will look at reducing the cost of the UC system during these meetings.

Chancellor Henry T. Yang said these “upcoming discussions and advocacy with the Governor and the Legislature are extremely important for UC Santa Barbara and the UC system.”

According to External Vice President of Statewide Affairs Melvin Singh, students are positioned in the middle of a dispute in which both the state and the UC Regents are waiting on the other to provide funds, as expressed during student protests at the Regents’ meeting and decision in November.

Singh also said students have the most to lose in the budget negotiations.

UC’s service and patient care union AFSCME 3299’s spokesperson Todd Stenhouse said the issue with funding for the university lies not only in the amount of money being raised for higher education, but also accountability for how the money is being spent.

Director of the Office of Financial Aid and Scholarships Michael Miller said it is “too early” to tell how exactly students will be affected, and said he is glad to see some programs funded in the proposal but dismayed that others are not.

“The Governor has included funding to support second year implementation of the Middle Class Scholarship Program in the California Student Aid Commission budget, which is welcome news,” Miller said. “I was disheartened to see that the Governor did not include funding for the state match to the D.R.E.A.M. Loan Program in either the UC or CSU budgets.”

Varner said if later revisions of the proposed budget plan fail to provide the funds requested, there are still other options before the tuition increase goes into effect.

“The idea would be then to look at the different operatives,” Varner said, “which would include the mix of out-of-state-students and the other things that we’re doing with respect to the other available sources of revenue and come up with the right mix of what is appropriate for the students and the families and the continuation of the robust financial aid.”

One of these options is the SB-15 bill proposed in December, which will increase enrollment into higher education in California, but may also eliminate the five-percent tuition hike for students, in addition to improving funding for Cal Grants.

According to Anthony Reyes, spokesperson for the Office of Senate President Pro Tempore Kevin de León, the bill will help deal with higher education funding issues.

“It is a comprehensive plan that addresses the ability of a California student to access, afford and complete college in the UC and CSU systems, and proposes additional investment from the State and more efficient use of our current resources,” Reyes said.

The SB-15 bill would require Brown to maintain the increase in funding and a “transition” for the aforementioned Middle Class Scholarship Program in which no new students would be admitted into the program. Additionally, the bill would require an increase in out-of-state tuition, which Brown “does not believe in,” according to Palmer.

Stenhouse said the budget should revisit the 1960 California Master Plan for Higher Education, which established separate responsibilities for UC, CSU and California Community Colleges system as well as specified the division of funds for each type of institution.

“Where everybody seems to agree is that we don’t want tuition hikes,” Stenhouse said. “We don’t want to see tuition go up on students. We have to get back to a more affordability, accessible model consistent with the Master Plan for Education.”

Varner said the increased attention focused towards the issue of funding for public education is a positive outcome.

“At the end of the day, it’s really good that we have got people looking at this whole issue,” Varner said. “Obviously there was no intention to create a confrontation issue. It was to get this clearly in front of everyone so we can have a very meaningful dialogue about what concerns the governor and legislature have about how the university is operated and the things we can do to satisfy their concerns.”

“We can barely afford to pay for it ourselves now,” Vargas said. “That just means we have to pull out more loans to help pay for it.”

According to Singh, student and staff opinions need to be voiced in order for the legislature and the Regents to recognize the severity of problems a tuition increase would cause students.

“As the primary investors of the UC System, students and faculty need to make our voices heard and our stances clear, because they are not currently being represented in the state legislature,” said Singh. “The University of California is, of course, functioning, but is not necessarily thriving.”

A version of this story appeared on page 3 of Thursday, January 15, 2014’s print edition of the Daily Nexus.

IF we cut all the waste, crud and silly stuff that very few use, yet a vocal few argue “create the holistic higher education experience” so vital to the role of the UC System….there would be no tuition increases.