The Daily Nexus
News
Gauchos in Paris Recount Recent Shooting
January 14, 2015 at 3:19 am by Beth Lebens 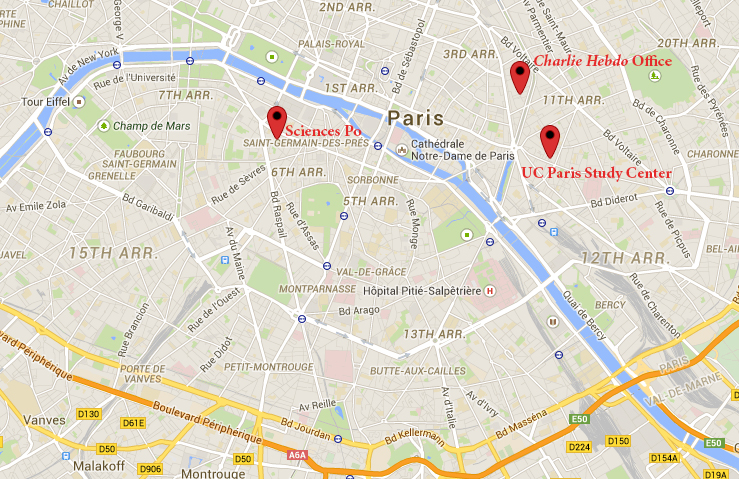 The four gauchos are presently in Paris for the yearlong study abroad program hosted by Paris’ L’Institut d’études politiques de Paris (Sciences Po), and six more are to be enrolled in the spring semester program. Student orientation takes place at the UC Paris Study Center, less than a mile from the Charlie Hebdo offices where the attack took place. Third-year political science major Jorge Escobar said he recently returned from UCEAP Paris and that the relatively small size of Paris amplifies the personal effects of any major event in the city.

“You can walk from one side of the city to the other in three hours,” Escobar said.

Escobar said the magazine is very popular, and he studied it in a class he took in Paris called “Media in France and the European Union.”

Third-year global studies major Kaylena Katz has been in Paris since August, and said the shooting event and resulting headlines reminded students of the Sept. 11 terrorist attacks in the U.S.

“Newspaper headlines such as ‘Le 11 Septembre Francais’ in [French newspaper] Le Monde have had American exchange students recalling the terrorist attacks when we were young,” Katz said.

“Over the last few days a growing number of visible police has been a little bit unsettling,” Gutches said. “While I feel safe, the idea that a threat is still imminent has really put me and everyone around me on high alert.”

According to Gutches, few pedestrians are seen on the streets following the attack.

“Thursday night and into the weekend, the streets were dead,” Gutches said. “It’s rare to see so few people walking around Paris.”

“Ever since [the] Isla Vista shootings, the sight of guns makes my skin jump and makes me want to get away as soon as possible,” Brannan said.

According to Briana J. Sapp, UCEAP deputy to the Associate Vice Provost and Executive Director, UCEAP has been very active in the midst of the attack and surrounding events.

“We’re closely monitoring the situation, which is constantly evolving,” Sapp said. “Rest assured that we are in regular communication with students, parents, faculty and staff.”

Linda York, UCEAP Regional Director for programs in Europe, said the program immediately contacted the students to confirm their safety.

“First priority during an emergency is to ensure that our students are safe. The study center administrator in Paris emailed all Paris students,” York said. “The California office immediately reached out via email to year and spring students in all France locations.”

“We cover safety and security during our orientations, and we go over what to do in different scenarios ranging from civil unrest to collective catastrophes,” Ocana said.

Brannan said she has confidence in UCEAP to ensure the students’ safety in the wake of the terrorist attacks.

“The directors at the UC Study Center in Paris were very clear about the [emergency] procedures,” Brannan said.

According to Brannan, there was “an immediate sense of solidarity with the victims.”

“Even if [French people] didn’t agree with the paper or were offended by it, there’s a massive respect for what they do,” Brannan said.

Gutches said she attended the march that took place on Jan. 11 held at the public square Place de la République in honor of the victims.

“[It was] very moving to see so many people from Paris and its surrounding areas standing in solidarity for the lives lost,” Gutches said.

According to Katz, many French people are directing their anger towards the country’s Muslim population, though not all French people hold these sentiments. Katz said he was upset to learn of the instances of aggression toward minorities across France that have occurred since the attack.

“It is disheartening to hear of the racism and misguided violence against minorities that has taken place in the aftermath,” Katz said.