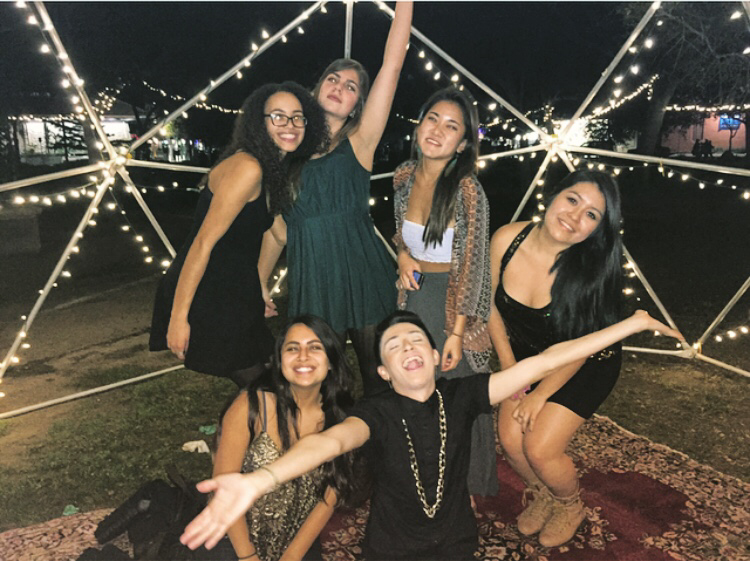 The block party was held as an accessible and safer alternative to what Womyn’s Commission members call the “I.V. party scene.” The event was sponsored by KCSB and I.V. First Fridays and featured a wide array of music by female artists, a hot chocolate booth, dancing, live art and a photo booth.

Spatial art professor and creator of First Fridays Kim Yasuda said she wanted to find ways for people to heal after the I.V. shootings through events that foster positivity and security during weekends in I.V.

“All that happened in the spring, that was so hard,” Yasuda said. “Knowing that so many students were coming back in the fall and there was just no vehicle for healing … I have always believed that our culture could provide a space for positive engagement in counter to what seems to be the sensibility when a tragedy happens.”

Yasuda said I.V. First Fridays made use of UCSB Nobel Prize winner and materials professor Shuji Nakamura’s invention, energy efficient LED lights, to brighten the block party. The Womyn’s Commission constructed an outdoor lounge in the park, complete with couches and LED Christmas lights wrapped around the skeleton of a geodesic dome.

According to the supporting coordinator of Womyn’s Commission, third-year global studies major Cassie Rubio, the social atmosphere of I.V. can cause some students to feel threatened, which is why the organization felt it was important to host an alternative event.

“A lot of times Isla Vista can feel very unsafe and predatory so we decided to create a cool vibe where people can hang out and meet each other but also being conscious about the different issues surrounding them,” Rubio said.

Third-year film & media studies major Ashley Baker, who collaborated with Yasuda for I.V. First Fridays and photographs the events, said students were at liberty to organize the event in any way they saw fit.

“She gave us free reign to do anything that we wanted and she encouraged our creativity, which is something that I’m not used to,” Baker said. “When did most professors ask the students ‘It’s anything that you want to do’? We made up our curriculum and activities for this.”

According to Womyn’s Commission co-chair and third-year comparative literature and global studies major Danielle Maldonado, the event is used as a platform to advocate for women’s rights and representation.

“We wanted to take this opportunity to empower women, so all of our performers are female,” Maldonado said.

Rubio said she hopes to see more events like the block party in the future, where people can showcase talent that is not usually recognized while providing a safe alternative to the “I.V. party scene.”

“I hope that this won’t be the last block party,” Rubio said. “I hope that more and more venues like this are set up for female performers to be celebrated and shown off to I.V. because we have a lot of talent that doesn’t get enough credit they deserve.”