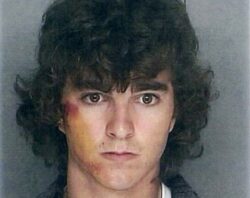 Shafer’s mugshot from his arrest in 2009.

Alumnus Jay Shafer was awarded nearly a half million dollars of county money by a federal court in Los Angeles last month for personal damages and legal expenses after he alleged he was beaten by an Isla Vista Foot Patrol (IVFP) officer while walking down Del Playa Drive in 2009.

On the night of Oct. 4, 2009, the then-19-year-old Shafer and two of his roommates were walking Del Playa Drive carrying water balloons when they were stopped by IVFP deputy Freddy Padilla.

The officer questioned what Shafer was doing with the water balloons before attempting to bring him to the ground in a manner that left Shafer with multiple bruises on his face and a night in jail on a charge of resisting arrest.

A jury ruled that Padilla used excessive force in their apprehension of Shafer during the incident. Shafer was awarded $120,000 for personal damages and approximately $300,000 for legal expenses.

According to Shafer, after he asked Padilla if there was a law against carrying water balloons, Padilla came at him and threw him to the ground.

“There were about four other officers that all came and collapsed on me,” Shafer said. “I was in complete and utter shock.”

According to Dom Gianola, Shafer’s friend who witnessed the incident that night, Padilla’s use of force was excessive and unreasonable.

“[Padilla] put his hands on Jay without even telling him,” Gianola said. “It was very out of the blue. Jay was not given any instructions and never got violent.”

Gianola said that along with Shafer suffering abrasions on his face from Padilla’s use of force, Shafer has also been impacted psychologically from the incident.

“I felt for him because it changed his personality after the incident,” Gianola said. “I feel really happy that he got the closure that he deserved and he needed.”

According to Shafer, he was sober on the night of the incident and does not drink alcohol or do drugs. Shafer’s criminal attorney was able to get the charge dropped in March of 2010 and advised him to hire a civil lawyer, who pursued a case against Santa Barbara County for damages incurred by Shafer as a result of the incident as well as legal fees involved in pursuing litigation.

Shafer said the he is glad the case has finally been resolved but that he will carry the incident with him for the rest of his life.

“Truthfully, this has been my life for the past five years, it’s been all I think about,” Shafer said. “There’s definitely closure now, but no matter what I do for the rest of my life, I’m going to have this mark on my record, this mugshot and this experience.”

Shafer said in the past five years he has been diagnosed with post-traumatic stress disorder and, has attempted suicide twice and has not returned to I.V. Shafer finished school studying abroad and went to law school after graduating from UCSB. He is now teaching in the San Diego area.

County Counsel for Santa Barbara County Michael Ghizzoni said despite Shafer’s win in court, Santa Barbara County representatives are working on challenging the verdict based on evidence suggesting Padilla used reasonable force during the incident to subdue an uncooperative Shafer.

“We believe Officer Padilla used reasonable force under existing law to take a physically resistant subject into control and into arrest,” Ghizzoni said.

According to Ghizzoni, the jury actually found in favor of Padilla on three out of the four charges brought against him in court.

Ghizzoni said the County has until Jan. 20 to file a post-trial motion and receive a judge’s ruling.

However, Shafer said he did not feel that the force used on him in the arrest was reasonable.

“They forced my arms behind my back and bloodied my face,” Shafer said. “That’s when I knew immediately something was wrong. I committed no crime.”

Now that Shafer is able to put some of the incident behind him, he said he wants students and I.V. residents to know what to do if they find themselves in situations like he was in on Oct. 2009.

“People need to know their civil rights and know when an officer is being abusive,” Shafer said. “If you’re approached by a police officer in this way, the smartest thing to do is just keep silent and seek an attorney. You can fight back.”

And the LE wonders why when they are in a full on brawl with an armed uncooperative person, students will pull out their phones rather than “help”.

Cops need to forget their agression training and learn to talk their way through an issue rather than resulting to violence.

…So is his name Schafer or Shafer? Copy editors shit the bed on this one.

If anyone had more recent dope on Freddie Padilla or the IV patrol deputies and college cops, please forward to me. Their behavior toward Shafer is not uncommon and I want to know about as many as I can.