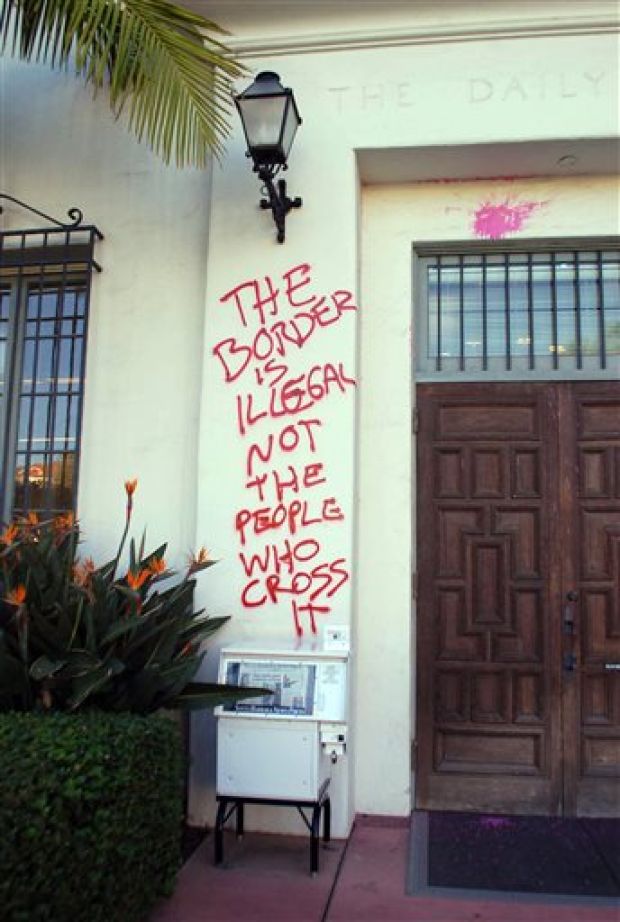 The Santa Barbara News-Press office in downtown Santa Barbara was vandalized sometime between Wednesday night and Thursday morning before scheduled protests were set to take place at 6 p.m. on Thursday in response to the allegedly racist front page headline published this past Saturday.

According to Santa Barbara Police Department spokesperson Sgt. Riley Harwood, the spray paint included pro-immigration website references and statements such as “The border is illegal, not the people who cross it,” and “Fight back.”

“There were also about seven different splatters in addition to the graffiti statements that were painted,” Harwood said.

Harwood said the vandalism comprised a total area of 88 square feet, which accumulates to approximately $1,450 in damage. As of Thursday afternoon, Harwood said he believes the graffiti had been cleaned up.

“There isn’t any increased police presence because of the incident,” Harwood said. “But if protesters take to the streets, we need to facilitate that.”

In a statement provided by Santa Barbara News-Press Director of News Operations Donald Katich, the News-Press has used the term “illegal” for 10 years now in regard to describing those living in the U.S. illegally, notwithstanding their country of origin.

“This practice is under fire by some immigration groups who believe that this term is demeaning and does not accurately reflect the status of ‘undocumented immigrants,’ one of several terms other media use to describe people in the United States illegally,” the press release stated. “It is an appropriate term in describing someone as ‘illegal’ if they are in this country illegally.”

The statement also advocated that protesters shift their frustration toward the legislative immigration process instead of at the News-Press.

“The outrage voiced by immigration advocates should be directed at the current immigration system that takes years of bureaucratic red tape to complete,” the press release stated. “This outrage is shared by those who go through the process legally and stand at the end of the line of those who skirt U.S. law.”

The recent act of vandalism came in the wake of a call to action by the community representation group People Organizing for the Defense of Santa Barbara Youth (PODER). In a statement, PODER said the use of “illegal” in the recent News-Press headline violates the journalistic standard dictated by AP Style and is an attack on local undocumented residents.

According to PODER spokesperson Isabel James, however, none of the protest organizers were involved in the vandalism, nor does the group support the act.

“We don’t support vandalism of private property, but we do understand the message was coming from the frustration with biased media,” James said.

“We hope the protest will be a platform for dialogue between community members and the Santa Barbara County News-Press,” James said. “It doesn’t look like they intend to make an apology or change what they thought was okay. We’re here to tell them that it’s not.”

Why don’t they admit it? Only a terrorist group would
attack a Newspaper in this manner!
What is next? Violence against this newspaper?

Keep up the great and truthful work Santa Barbara
News Press!
I hope the vandals are arrested and brought to justice!

Then logically, all graffiti artists are terrorists, according to you. We should start posting the National Guard around overpasses, then.

Well Dylan this is an outright attack on our
Constitutional rights by a foreign entity!
This group is demanding that our borders be opened
so that anyone including terrorists can enter the U.S.!
Our Borders mean we are a sovereign nation!
By the way graffiti artists are subject to arrest
or aren’t you aware of that? There is a reward
for turning them in! DUH!

You’re missing the point, which is that you sound so outlandish that it is impossible to take you seriously. And you don’t seem to know what you’re talking about either, which doesn’t help you. Graffiti is an attack on our constitutional rights? Terrorists entering the country via the border? Don’t make me laugh.

Well Dylan I guess you haven’t read about what happened in Paris?

Oh I think I heard about that! That’s where a bunch of writers got spray painted in the face, right?

No, I live under a rock. Of course I’ve heard. How that relates to this beats the hell out of me. If anything, asking me that just shows how paranoid you are.

An American newspaper uses the proper word for
illegal aliens and a group protesting as Mexican Indians feels they should be called legal aliens
and spray paints a wall? Why would the word “ILLEGAL” bunch up their panties?

A better question: who are these Mexican Indians you speak of?

Dylan Aleshire:
“A better question: who are these Mexican Indians you speak of?”

Dylan apparently you are in another planet! I’m not even going to bother with you! Maybe you didn’t see the photos of the protest at the building that was spray painted. I guess you didn’t see the Mexican Indians dancing in their native garb! Sheeese!

An even better question: why is your grammar so bloody awful?