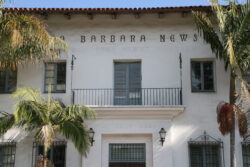 PODER, others to protest use of ‘Illegals’ in Recent ‘News-Press’ Headline

Students and other Santa Barbara residents will assemble outside the Anacapa Street office of daily Santa Barbara newspaper the Santa Barbara News-Press tonight at 6 p.m. to demand a retraction of an allegedly racist News-Press headline published this past Saturday.

On the front page Jan. 3 edition of the News-Press, the paper ran a headline reading “Illegals Line Up for Driver’s Licenses” accompanying an article on AB-60, a recently approved law that took effect Jan. 1 allowing undocumented individuals in California to obtain drivers licenses. Individuals affiliated with community representation group PODER, or People Organizing for the Defense of Santa Barbara Youth, have organized a protest and released a statement condemning the headline.

The protest is expected to draw around 300-400 people and feature multiple speakers, according to first-year Santa Barbara City College early childhood education major and event organizer Isabel James, who said she wants the newspaper to know the headline was inappropriate.
“Our entire community is affected by this,” James said. “We want a way to show the number of people that are not okay with this and that are going to let the Santa Barbara News-Press know that this is not acceptable in our community.”

According to James, the headline is both dehumanizing and violates AP style, the writing guidelines established by the Associated Press to guide journalists in writing news stories. James also said PODER wants a rewrite and apology from the News-Press for a headline “so blatantly racist.”
“[The stylebook] really clearly states that using the term illegal to mean a person or a group of people is dehumanizing and it’s not okay to be furthering oppression that way through media,” James said. “The reason that it’s so offensive is that you are referring to people … and bumping their status down from human being to illegal thing.”

According to PODER member Savanah Maya, PODER has taken steps to respond to the headline by attempting to put financial pressure on the News-Press and thus “force them to respond.”

“We’re boycotting, so we won’t be financially supporting them, because especially in Santa Barbara, money talks, and money is how things are moved and money is how things are changed,” Maya said, “Once the money stops coming in, they reevaluate things and there’s enough saved change that follows with the lack of money so they’ll give a public apology because … about 40 percent [of Santa Barbara] is made up of a Latino population.”

News-Press Assistant City Editor Merrill McCarty declined to give a statement regarding the protest or allegedly racist headline, and other News-Press staff were also unavailable for comment.

Fourth-year sociology major Gabriel Cardenas said the article and headline is misleading and was written to make the story more sensational.
“It depicted those photographed as ‘illegal aliens’ when, really, one cannot tell just by the photo,” Cardenas said. “It is more of a symbolic and phenotypical lens in which these human beings were targeted and racialized to give off a ‘juicy’ and ‘attractive’ headliner for such a story.”
Former graduate student Filiberto Nolasco said the purpose of the protest is to uphold journalistic standards and promote responsible press in Santa Barbara County.

James also said the News-Press can take steps to ensure better reporting on issues related to communities of color in Santa Barbara.
“We can talk about people that are emigrating getting driver’s licenses because it’s really awesome and it’s really good,” James said, “but we can talk about it in a non-dehumanizing way and that’s what we want to show, we want responsible media and journalism in Santa Barbara.”

According to James, PODER is open to potentially assisting News-Press in taking steps toward more politically acceptable journalistic practices.
“They could definitely start by having more people of color on the News-Press staff … PODER would be more than happy to create an oversight committee,” James said, “and we would love to have dialogue with the News-Press about how they can talk about issues without hurting people.”

A version of this story appears on page 1 of the Thursday, January 8, 2015 issue of the Daily Nexus.

I completely agree that the headline was unacceptable. Also, diversity in any office is a good thing. However, PODER should understand that an outside group providing an oversight committee to a newspaper is from a journalistic standpoint, completely unethical.

Rather, I would suggest that PODER find worthy candidates and help submit their resumes to the News Press when job openings appear. They should not, however, be in anyway involved with the inner-workings of the newsroom.

An Illegal can not get a job at the NP!

Who said that an “Illegal” person was going to get a job at the NP? We want more people of color in the news press staff, their is people who are born and raised in the United States who can qualify to be in the news press.

“qualified” ? Are you sure?

I’m positive the publisher and editor have a much different idea of what “qualified” means than you do.

If you want a job that you are qualified for – try working for the governement. It the only place where that BS flies.