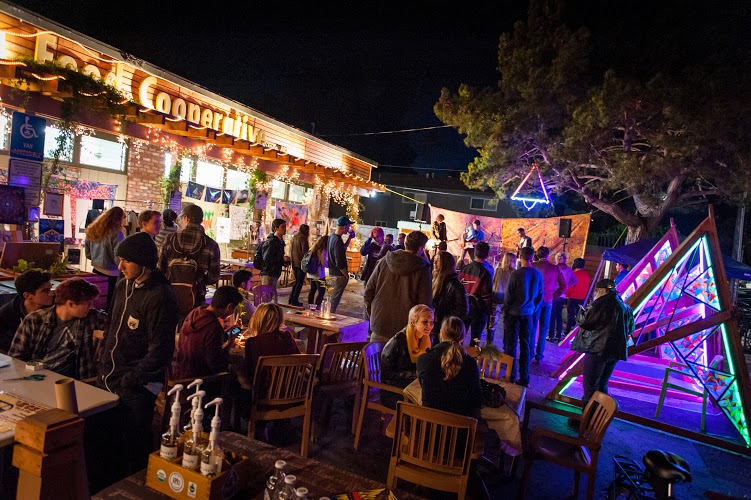 Greeted by a refreshing, chilly night, hundreds of students and locals gathered in the parking lot of the Isla Vista Food Co-op last December during dead week. The normally asphalt wasteland was transformed into a luminescent, mystical wonderland complete with glowing triangular sculptures, an artisan village and an abundance of holiday lights. The evening launched issue three of the student-run, literary arts magazine The Catalyst.

Re-started in April 2013 by fourth-year English major Natalie O’Brien, The Catalyst is a publication that grew out of UCSB’s English department created by the students, run by the students and made for the students. The first issue, released in January 2014, consisted of 80 pages of original student art and writing. Now, after months of planning and preparation, The Catalyst returned with a launch party to celebrate the release of their third issue, which can be found at the media racks in the I.V. Food Co-op or in the English department.

An artisan village took over the grocery store’s patio, and local craftspeople sold everything from handmade bohemian wear to tie-dye tapestries. Onstage, students recited spoken word, poetry and short stories from the issue.

Third-year global studies student Hope Curran, who has participated with The Catalyst previously, showcased her simplistic, nature-based photography at one of the booths. Her inspiration derives from rich spiritual beliefs.

“I believe we are created to create, to savor the moment that God has created for us,” Curran said. “The co-op is the epicenter of a huge community founded on expression and it really takes one back to their roots.”

Many artists were showcased in the event’s art walk, which stretched through the walkway to the I.V. Food Co-op doors. Senior Deanna Kim and juniors Corinna Zanolini, Ginger Quinta and Collette McGarrity were a few of the artists, and they brought their own share onto the standing easels and wire racks. One piece that really stood out was the fluorescent wooden-glass, quasi-teepee installation built by UCSB graduates Dominic Moretto and Mark Hoke. The three structures were spaces “where people would be able to get away and recharge.”

While attendees recharged in these “pyramids of life,” others headed to the dance floor to get down to local bands The Crash Landings, Sun Daes, Hēlo, Hail Adventurer!, DJ Jones and DJ Ho, and the highly improvised performance of The Abortions, who albeit lacking a key member, were able to capture the praise of the crowd.

The space between each set was filled with students reciting poems aloud to the attentive audience. Powerful spoken word poetry was delivered by five students, ranging from fifth-year Erzsebet Vincent’s agony of forgetting about that “one person” to junior Dylan Ginoza’s experience as a gay Boy Scout appropriately coined “an illegal eagle.”

Students also read parts of poems and prose published in The Catalyst. One such participant was freshman philosophy major Sam Arrow, who wrote the piece “Yelling Voices.” Arrow described The Catalyst as “the creative [outlet] I had been looking for. I have Natalie to thank for that. I randomly met her in a coffee shop and after having a meaningful conversation she convinced me to submit my work.”

The creative outlet Arrow described is the very thing Editor-in-Chief O’Brien had hoped The Catalyst would serve as.

“There have always been people wanting to participate [in UCSB’s artistic community], and now that we have solidified our repertoire with a growing group of individuals, events like this are able to happen,” O’Brien said. According to her, the purpose of the magazine is to “bring together people at UCSB in addition to bringing together different types of media in a collaborative effort,” which was exactly what was happening at The Catalyst’s showcase.

The magazine has big plans for future events, including a film festival. “A film festival has been in the talk since the release of our first issue, and if our team grows with more like-minded ambitious members, this could hopefully happen spring quarter,” O’Brien said, the glow from the launch party sparkling in her eyes.

With these prospects in mind, one must think of the ways in which the UCSB community can keep this literary magazine alive, so that it does not fizzle out as it had seven years previously. The answer to this is securing enough dedicated members who are passionate enough to hold several fundraisers for the magazine. The whole project is all volunteer power since The Catalyst request for a lock-in fee was denied in the Associated Student election last spring.

This, however, does not discourage O’Brien, who is going to request another lock-in fee spring quarter.

“My favorite thing is being able to help people break out of their shells and find their voice,” O’Brien said, energetically waving her hand at the event that had been in the works for months. “With no funding there is no Catalyst and co-community. So go and write the poem that crossed your mind in your 8 a.m., go paint the way you felt about your breakup, come and join The Catalyst class for Winter Quarter (Interdisciplinary 185CW), because we won’t stop throwing events like this. The Catalyst has brought together the artistic community on campus and in I.V. and hopefully it’s not going anywhere soon.”

To get involved in The Catalyst or to submit to the magazine, visit thecatalystucsb.com/.