The Daily Nexus
Sports
Big West Play Begins in First Blue-Green Outing of 2015
January 8, 2015 at 5:00 am by Michael Jorgenson 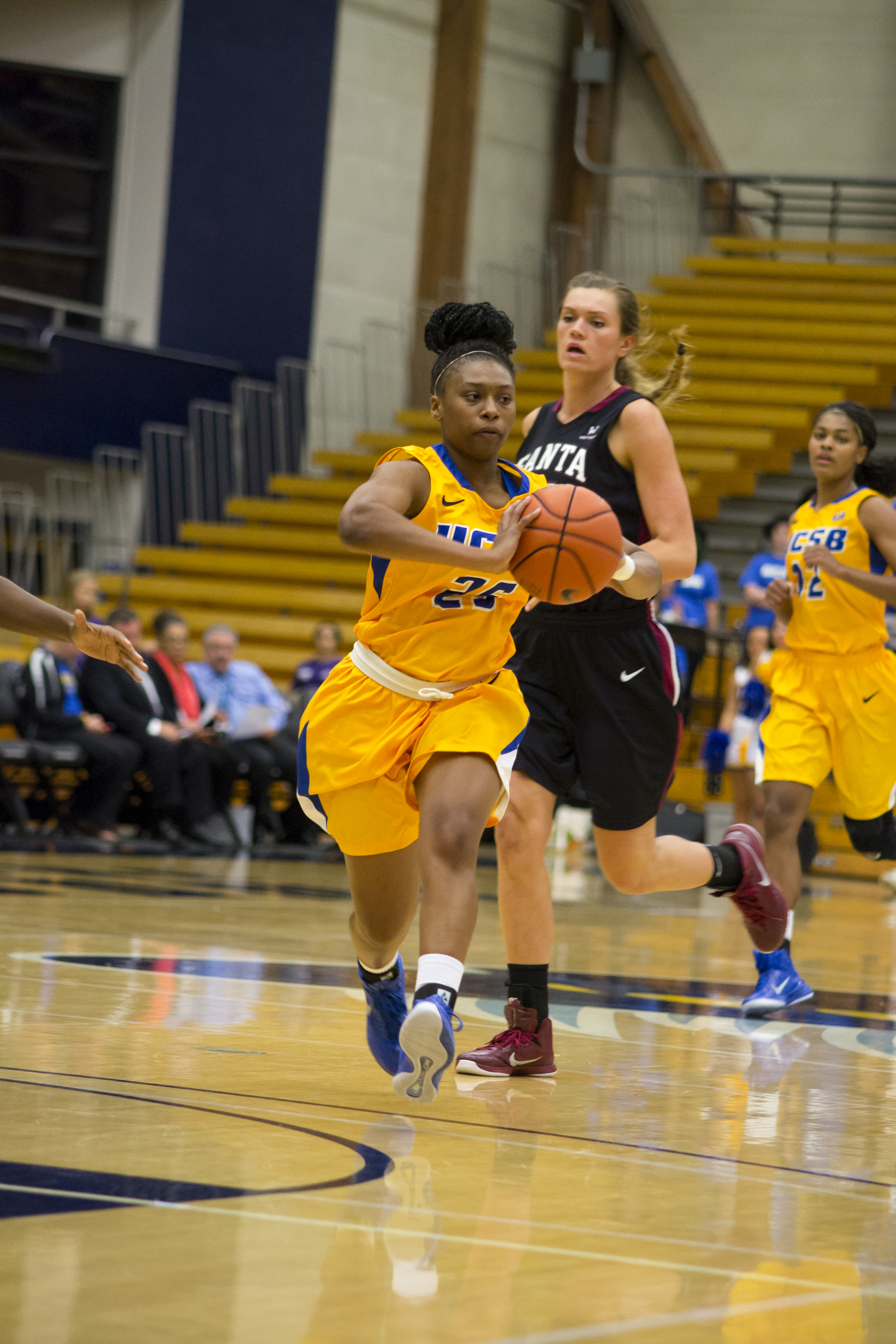 Big West play kicks off this Saturday when the UCSB women’s basketball team hosts Cal Poly looking to pick up its first win of the season.

Although they have struggled mightily in the first two months of the season, the 0-13 Gauchos have some momentum coming off their strongest performance yet on Tuesday in a 64-74 loss against CSU Bakersfield. The Mustangs enter having just defeated that same Bakersfield team 71-66 to end their four-game losing streak. At 5-7, Cal Poly is tied for the sixth-best record in the Big West heading into conference play.

“The conference is a lot better than it probably has been since I’ve been here,” Head Coach Carlene Mitchell said. “We’ll have our hands full. It’s not going to get any easier but I definitely feel that if we stick together and continue to grow then we’ll be okay.”

Against Bakersfield, behind career-performances from sophomore point guard Onome Jemerigbe and freshman forward Chaya Durr, the Gauchos shot 48.1 percent from the field on their way to a season-high 64 points.

“With our kids, the key is the effort, the body language, the shot selection, and everyone just playing free and letting the ball move,” Mitchell said. “Those things are important, and the numbers on the offensive side (against Bakersfield) are good for our confidence.”

Jemerigbe scored a career-best 16 points in that game, improving her team-leading averages of 8.4 points per game on 42.7 percent shooting and 3.4 assists per game. Durr added a personal-best 15 points of her own and tallied a game-high eight rebounds.

Santa Barbara will need to carry over its hot shooting if it is going to find success against the Mustangs, who average over 24 points more per game than the Gauchos. Keeping up in the scoring department will be the key, as UCSB has scored over 60 points just one time this season. The more formidable offense of Cal Poly has done so in 11 consecutive games.

“We have to come out with some fire and energy,” Jemerigbe said. “We need to play to our strengths, lock up on defense and communicate.”

Another significant factor for the Gauchos will be trying to stop a solid three-point shooting team in Cal Poly, which shoots 35.1 percent from beyond the arc.UCSB has struggled to stop the three-ball this season, most recently allowing Bakersfield to shoot 11-21 as it used long-distance shooting to take over the game.

The Gauchos will primarily have to try to find a way to stop Ariana Elegado, who provides a large chunk of her team’s offense. The senior guard is the only player on the team averaging double-digits in scoring with 15.6 a game. The San Diego native is also the top threat in the three-point game as she averages 2.5 makes a game on 38.5 percent from deep.

On the offensive side for UCSB, balance continues to be the story with a different leading scorer seemingly every night.

Junior guard Jasmine Ware owns the second-highest points per game average at 7.5 a game while leading her team with 1.6 steals per game. Senior center Clair Watkins adds 7.2 PPG of her own while holding down the middle with team-highs of 1.9 blocks and 6.2 rebounds per game.

The game is set to tip-off at 2 p.m. this Saturday in the Thunderdome.

A version of this article appeared on page 8 of January 8, 2014’s print edition of the Daily Nexus.