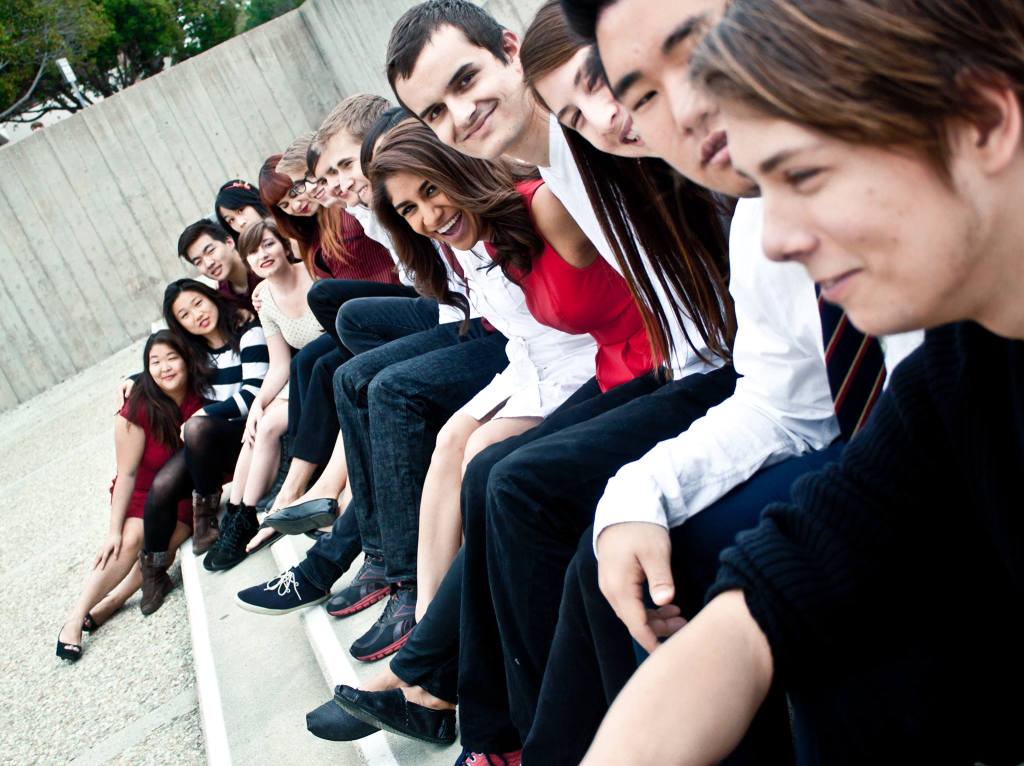 On Dec. 5, the tiny lecture hall that is Music 1145 was filled with harmonious voices, rhythmic clapping and about three or so aluminum foil hats. If those factors don’t seem to add up, then let it be known — this was an “Interstellar” themed a capella concert hosted by UC Santa Barbara’s youngest a capella group, InterVals. Online, their group description is summed up in one sentence: “Basically, we’re a quirky, fun family that loves to sing.”

Before InterVals’ “quirky” performance, two other UCSB a capella groups, Vocal Motion and Naked Voices, graced the 70s-style wooden floor of Music 1145. Both groups were clad in tees embossed with their respective logos; Vocal Motion’s shirts had their trademark “VM” while Naked Voices’ boldly said, “Get Naked.” UCSB’s only all-female a capella group, Vocal Motion, gave a soulful rendition of “Barton Hollow” by the Civil Wars. Naked Voices charmed the crowd with Amy Winehouse’s “Valerie” and some seriously cheesy (albeit crowd-pleasing) choreography.

And let’s not forget Brothas from Otha Mothas, a personal favorite of mine (maybe I’m a little biased because I went to their last concert and it was awesome — check out the article here HYPERLINK PLEASE!). In respect to their almost-boyband image, BFOM broke hearts wide open with a sweetly-sung cover of the Temptations’ “My Girl.”

Without hesitation, all fourteen members of InterVals finally made their way to the floor space below the cushy stadium seating — and not without acknowledgement to the “Interstellar” theme. Living up to the quirky label, most dressed up in galaxy-print attire, sporting star headbands and galactic shirts. Others slapped some aluminum foil on their head and called it a day (hence the three or so aluminum foil hats).

After introductions, InterVals launched straightaway into their first song, “The Show Goes On” by Lupe Fiasco, and filled the humble venue with joyous energy. Each member showed off their abilities to groove, as not a single song sung was without the accompaniment of a little bit of hip shaking and a lot of wild arm movement.

After the opening song, a rap portion ensued. I should have expected this, as spontaneous rap-offs seem to be a trend with all of the a capella groups. But what I wasn’t expecting was the main rapper to be the smallest member of InterVals. Her rapping packed a swag-filled punch, and matched with the beat boxing of the tallest member of the group. He also rapped, interjecting at one point with a “We’re in space, yeah!”

Adorably dorky transitioning aside, InterVals wowed the crowd with strong vocals and rich harmonies. Some memorable performances were the well-organized and catchy renditions of Dexys Midnight Runners’ “Come on Eileen,” Katzenjammer’s “God’s Great Storm” and a wildcard — the innuendo-filled “Pants” by Here Come the Mummies.

Overall, InterVals’s last fall show made for a solidly entertaining night. Filled to the brim with laughs, clapping and toe tapping, their quirky concert made them hard not to love. Aluminum foil hats off to this fun bunch.

To get in touch with InterVals, check them out on facebook.com/InterValsUCSB.