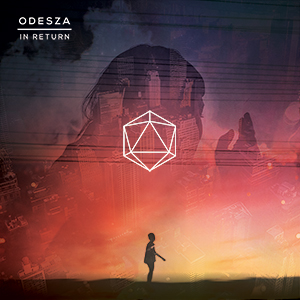 You know that feeling that swells from your core through your entire body when you see a protagonist of one of your favorite movies triumph over his adversaries and obstacles? You hear the happiest music you’ve ever heard in your life and in that moment, nothing could feel better than witnessing this character succeed. The coalition of the music you hear and what you see compels every fiber of your body to simply feel good.

ODESZA’s In Return, the second album of a steadily-growing repertoire, conveys this exact sentiment. Hailing from Seattle, Washington, Harrison Mills and Clayton Knight comprise this genial, inspiring electronic phenomenon: ODESZA. The duo bestowed their latest upon us in early September 2014. The album invoked the unfortunately subjective, crucial struggles of youth in a positive way that induces a dearly desired difference of perspective. In confusion, doubt, sensitivity and anxiety, when you fear the impending future and there is absolutely nothing left to do, listen to these melodious life-provoking tracks. Utterly beauti-fucking-ful blissful vibes will pulse through you.

They evoke euphoria from within the depths of mentality, without visual accompaniment. The sixth track, “White Lies,” featuring Jenni Potts, floats through memories of necessary painful maturity and manipulates Potts’ vocals as an instrument, an attractive component of the song. They chose a specific array of the lyrics based upon the specific sounds of the words, and re-order phrases to achieve an instrumental vocal sequence. The very sounds produced transmit connotation of thought and carry ideas to the listener.

“It’s Only” and “Say My Name” are tracks that both feature Zyra, an up-and-coming 20-year old vocalist. Her voice caresses you on a fluid magic carpet ride for your ears. Together, ODESZA and Zyra poetically and pleasurably envelope your audio cavity. All of a sudden there exists beautiful electronic music with a real connection to youthful hopes and disappointments. “Say My Name” comments on the obsession of symbolizing all of life that is apparent in the human psyche. It also speaks to holding on to a hope even in the face of failure, and still ensuring that hope within yourself, beyond deterioration.

The ninth track, “It’s Only,” taps into the frequently confused and unrealistic expulsions of emotions of a young mind. The song describes a consciousness which longs for a connection of love. It easily mistakes emotional disarray for rationality and muddles clarity. ODESZA continues to portray complicated emotions and human contradictions throughout the entire album.

“Kusanagi,” a purely instrumental track, derives its name from the epic tale of the beautiful sword found in one of a slain monster’s four tails. The Japanese god, Susanoo, came to aid a family that was harassed by a serpentine monster with multiple heads and tails. After defeating it, he discovered the sword Kusunagi (“Grasscutter”). Knowing this, the song channels substantial meaning with a lyric-less instrumental form. The uplifting tinkling melody evokes hope and salvation. Like Charlie Chaplin’s “The Great Dictator’s Speech” it begins with swells of light tones that elevate one’s positivity to remain unbroken. There is an actual intellectual process occurring through these sounds that compose the songs forming In Return.

ODESZA accomplishes the infusion of different sounds, used in unique fashions that betray brilliance in construction. Since first encountering them online in my freshman dorm room they have continuously upheld their talents and each new song is a new splash of ODESZA, a duo that never traps themselves in the muck of redundancy.

“Bloom” is simply an artifact among riches. I don’t want to bias your perception of it so just go listen to it and the album already.