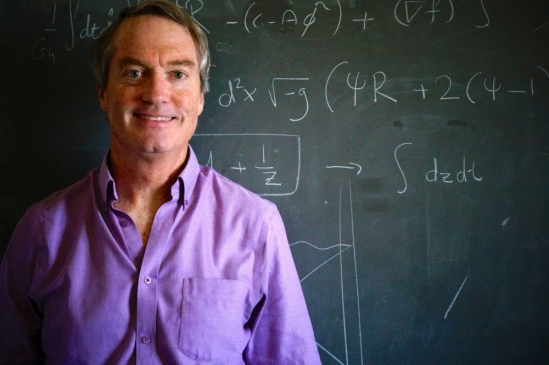 Polchinski has received a number of awards for his contributions to fundamental physics, including the Physics Frontiers Prize from the Milner Foundation, which was given for his work involving quantum field theory and string theory, as well as the discovery of D-branes, structures that have been shown to provide the atomic structure of black holes. Polchinski’s lecture explored black holes and spoke of the search for a unified theory of the laws of physics along with the difficulty of connecting two main theories — quantum mechanics and general relativity.

Polchinski’s research focuses especially on quantum field theory, which is the basic mathematical language of particle physics. It also focuses on string theory, a proposed unified theory of all the laws of physics in which all particles are tiny vibrating strings.

“In quantum field theory, I have clarified some of the important ideas, by explaining how they follow from simple principles,” Polchinski said in an email. “In string theory, I am best known for showing that the theory could not be complete, that besides strings it requires other objects that we call branes. I also have proposed an explanation of the dark energy discovered by astronomers.”

According to Polchinski, his research has been aided by his ability to comprehend both the concepts of physics and the mathematics that accompany his form of research.

“Probably most of my discoveries have come by taking some interesting mathematical result in physics, and understanding what is the physical principle that explains it,” Polchinski said in an email. “I think my best tool is the ability to translate back and forth between equations and physics.”

“The latest thought experiment presents new challenges, and we can hope that it will lead us to a more complete theory of quantum gravity,” Polchinski said.

Polchinski’s contributions to theoretical physics include a modern formulation of renormalization theory and original work on the string landscape. Chancellor Henry T. Yang said Polchinski is exceptional both for his scientific achievements and for his ability to simplify concepts for a broader audience.

“As one of the pioneers of string theory, he has demonstrated tremendous creativity and insight, not only in discovering new scientific truths, but also in communicating these complex ideas in a highly accessible and inspiring way,” Yang said.

Washington State University alumnae Wanda Johnsen attended Polchinski’s lecture and said she was inspired by how Polchinski reinstated the idea that there are still many things to discover and that there are no limitations to the universe.

“The lecture gave some answers about the infinity of the universe,” said Johnsen. “Who knows what is the beginning, where is the end, and how all universes are expanding. It brings a new idea about the lack of limitations.”

Polchinkski said that while new discoveries have been made in the field of physics, there is still much more to learn.

“I hope they got the idea that there are some big questions about the nature of space and other things, that we have some new and exciting ideas about,” Polchinski said.

According to Professor emeritus of mathematics Eugene Johnsen, the lecture provided any member of the audience who is interested in science a basic understanding of Polchinski’s complex research.

“One of the best things I took away from tonight was some of the connections between quantum mechanics, general relativity, special relativity and all of the issues that came up within that topic: the paradoxes, the questions and the present state of affairs,” Johnsen said. “[His lecture] will motivate future scientists and future physicists to pursue this.”

Please make a text of his speech available for interested public like us who never had the opportunity to listen to him.