The Daily Nexus
News
Undocumented, Unafraid
December 4, 2014 at 5:00 am by Josh Ortiz 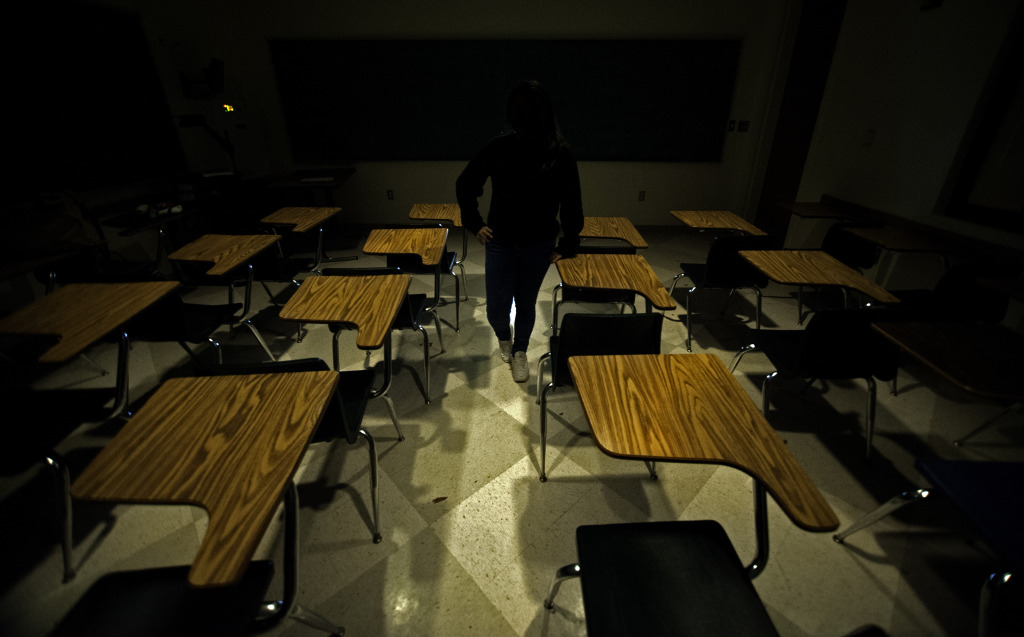 Third-year English major and undocumented student Adriana, whose name has been changed on condition of anonymity, said since applying to Deferred Action for Childhood Arrivals she no longer fears deportation. Kenneth Song/Daily Nexus

President Barack Obama announced an executive order on Nov. 20 to defer deportation for up to five million undocumented immigrants in the United States, allowing more undocumented students to apply for Deferred Action for Childhood Arrivals (DACA) in order to receive exemption from deportation and to obtain work permits.

Madison Villanueva, a second-year sociology and Asian American studies major and undocumented student, is co-chair of Improving Dreams, Equality, Access, and Success (D.R.E.A.M.S.), a campus organization dedicated to representing the university’s undocumented student population. Villanueva said the president’s executive order and DACA have provided her with opportunities that might have not otherwise been available to an undocumented student.

“There are a lot of people who advocated tirelessly for [Obama’s executive order] including myself and a lot of people I know,” Villanueva said. “DACA has been great for me because I can get a job now and it makes it a lot easier for me to get involved in advocating for the immigrant community.”

But Villanueva said the new immigration policy still leaves her fearing for her parents, worrying whether or not they will be deported.

“It won’t really change much for me because my parents won’t be safe from deportations,” Villanueva said. “They will still be vulnerable because local enforcement will still be collaborating with [U.S. Immigration and Customs Enforcement], and the detention and deportation quotas have not changed under this new executive order.”

According to Villanueva, the executive order’s inability to provide protection to the remainder of Isla Vista’s undocumented population is a reflection of the continuing inadequacy of immigration policy.

“I know a lot of folks who don’t qualify for [DACA] for a lot of different reasons,” Villanueva said. “For me, that highlights how much our community is still in danger of unjust detention and deportation.”

Adriana, a third-year English major and undocumented student whose name has been changed on condition of anonymity, said she would stress constantly over the possibility of being deported before she applied for DACA. Adriana said she remembers the fear she felt in one situation when she had a run-in with the Immigration and Customs Enforcement (I.C.E.) while traveling from Arizona to Los Angeles.

Many undocumented students struggle with fear of deportation and finding work, but DACA may allow them to breathe easier — at least for the remainder of Obama’s term. Kenneth Song/Daily Nexus

“I was so scared when that happened,” Adriana said. “But luckily the immigration officer was nice. He let us go because I told him I was returning home.”
According to Adriana, since applying to DACA she no longer worries about being deported and is able to live her life more freely by going to school, working a job and traveling without fear.

“I can come out of the shadows,” Adriana said. “I’m not afraid to travel and I’ve been traveling back and forth from Isla Vista to Los Angeles.”

Oscar Zarate, a second-year economics and political science major and an undocumented student, said his status has made it difficult for him to afford college because of his limited eligibility to scholarships and financial aid. According to Zarate, he can now obtain the work permit necessary to find a job to help pay for a postsecondary education as a result of Obama’s executive order.

“Due to Obama’s new immigration policies, I can work which is a big help,” Zarate said. “Now I can be a desk attendant, and that helps a lot with college expenses.”

Alejandra Martinez, a second-year sociology and math major and an undocumented student, said she sees the extension of DACA eligibility and work permit opportunities as positive, but still worries because the added protection for undocumented immigrants will only last for the remaining two years of Obama’s presidency.

“Obama’s presidency is slowly coming to an end, so there is still that concern of what is going to happen when a new president comes into office,” Martinez said. “I don’t know what kind of legislation the new president will try to implement.”

Zarate said he also shares the concern that Obama’s new immigration orders are only temporary.

“These immigration policies that have been applied are not forever,” Zarate said. “I fear for the future of the undocumented student.”

A version of this story appeared on page 3 of the Thursday, December 4, 2014 print edition of the Daily Nexus.

Expecially the ones who graduate with BIG loans cause they don’t qualify for financial aid – which is most of them. Those loans cost 7% and up, can never be discharged in bankruptcy, and will haunt society for years to come.

I’m glad the undocumented’s life will be easier.
Whew!

Do you do anything else besides slaughter the English language and disparage people?

This is off the chi-zang!

Pointing out that the jente subzidizin the newley liberates is oosefull.