The Daily Nexus
Music
It’s Beginning to Sound a Lot Like Christmas: 10 Jingles for Your Holly Jolly Soundtrack
December 4, 2014 at 12:00 am by Jane Huson

Now that Thanksgiving is over we can guiltlessly indulge in Christmas/winter songs! 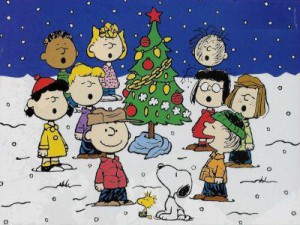 Sometimes we grow tired of meaningless Yuletide lyrics telling us to be a good cheer, so Charlie Brown decided to reflect on what the holiday is all about. “I think there must be something wrong with me, Linus. I don’t feel the way I’m supposed to feel. I like getting presents and sending Christmas cards and decorating the trees, but I’m still not happy,” he confided to his wise best friend.

Based on an 1855 French poem, this exceptionally moving epic commands listeners to “Fall on your knees and hear the angel voices.” When Josh Groban’s sensitive voice meets the powerful notes and heavenly lyrics, it may actually bring you to your knees.

“This Christmas” by Chris Brown

Groove with your family and friends in a soul train to this R&B jam. Chris Brown adds a modern tone to Donny Hathaway’s 1970 holiday single, beginning with a stirring a capella then dropping into a warm beat full of gospel choir vibes. For soul train tips, watch the 2007 movie starring Brown, Idris Elba, Columbus Short and Loretta Devine.

“Light me up, put me on top, let’s falala.” Lady Gaga’s scandalous metaphor invites us to show our naughty sides this season. She teamed up with singer Space Cowboy to taunt listeners with this PG-13 Christmas cadence. It’s delicious.

“You’re A Mean One Mr. Grinch” by Thurl Ravenscroft

The Grinchy singer, Thurl Ravenscroft, also voices Tony the Tiger for Kellogg’s Frosted Flakes. The remarkable contrast between his deep, slimy tone in this song and the enthusiastic “Theyyyy’re great!” speak to Ravenscroft’s versatility and talent. “You’re A Mean One Mr. Grinch” has become one of the most imitated winter songs.

“Dance of the Sugar Plum Fairy” by Tchaikovsky

Whether you danced to this delicate masterpiece at ballet recitals that your mom made you perform or you vaguely recall the intro music to the episode when Spongebob got the “suds,” you owe it to yourself to revisit this classic. Nothing portrays the magical innocence of Christmas like Tchaikovsky’s “Dance of the Sugar Plum Fairy” in the “Nutcracker.” It’s no surprise that this ballet is the most sold-out winter show in the country.

This old English carol describes the receiving of a dozen cumulatively extravagant gifts by “my true love,” ranging from a partridge in a pear tree to twelve drummers drumming. Have some family fun with this number and get each member to sing a line. Make sure the little ones get to stand up and shout “FIVE GOLDEN RINGS!” They’ll have a blast, and so will you.

“Carol of the Bells”

If “12 Days of Christmas” is the perfect interactive family sing-along, “Carol of the Bells” is 12 Days of Christmas 2.0. Composed by Ukranian Mykola Leontovych in 1904, this challenging, intense carol has been revamped by metal, jazz and pop artists, as well as ambitious families.

“White Christmas” is the best-selling song of all time made famous by the 1940s bass-baritone Bing Crosby. The simple lyrics and dreamy sound capture the joy and memory of the season.

Us Santa Barbarians can’t relate to the blizzards and storms they speak of, but we can certainly relate to the concept of pursuing intimacy. It can be hard to decide which version of the popular duet to lend your ears. In addition to Dean Martin’s classic, many agree that Jimmy Fallon and Cecily Strong on “SNL” and Will Ferrell and Zooey Deschanel in “Elf” are top contenders.

Idina Menzel and Michael Bublé got together with two talented kids this month to make a new rendition of this duet with an adorable video. They replaced the word cigarette with soda pop in “maybe just a cigarette more” and removed the questionable phrase “Say, what’s in this drink?” for “Say, was that a wink?” It’s too cute.

Jane Huson believes that while the weather outside may not be frightful in Santa Barbara, the music is so delightful.