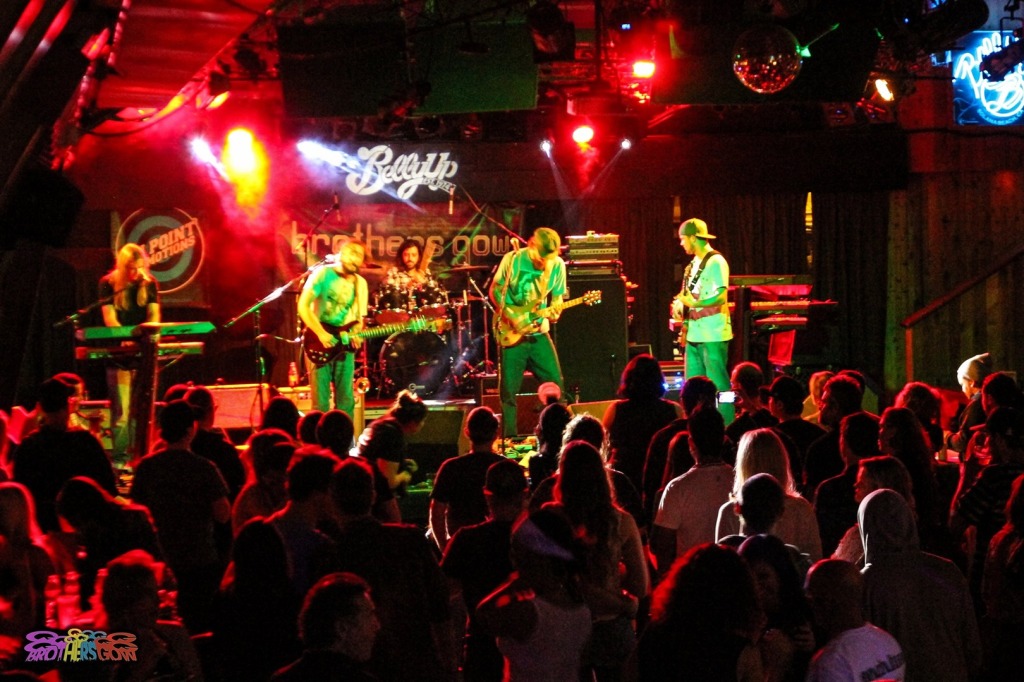 On Wednesday Nov. 19, Brothers Gow turned SOhO Restaurant and Music Club into a colorful river of sound. The psychedelic jam band from San Diego performed a menagerie of stylized songs ranging from country to deep reggae grooves interspersed with progressive math rock. While the genres jumped around, throughout the set the band exemplified impeccable musical talent and a distinct jam band sound.

From the outset, Kyle Merrill easily opened up his lungs to fill the room with epic vibratos and tingling runs. Alex Gow Bastine’s soulful organ parts and Ethan Wade’s solid rhythm guitar and harmonies laid an ambient foundation for Merrill’s climactic vocals and ripping guitar solos. The whole band was extremely connected due to the flawless drumming of Nathan Walsh-Haines and womping thumps of the bassist, Carson Church.

The groove was tight and their sound was full. “This is one of the best sounding bands I’ve ever heard play at SOhO, these guys are super Hi-Def man,” said Andrew Crockett, SOhO regular and guitar player/vocalist for local I.V. band Painted Naked. The mix was absolutely on point. Each layer was clearly defined, but intertwined beautifully to create large and warm tunes devoid of any muddled nonsense.

Brothers Gow is a band that one can’t resist dancing to. The crowd’s jiving changed with each song from playful swing dancing to purely rocking out. Groups of women yelled and swooned from the audience at the long-haired and bearded crew’s cosmic take on classic styles. Fist-pumping men and women were a testament to the funk and disco influences in Brothers Gow’s music as the crowd boogied down at the live gig.

The jam band ended their set with the title track off their recently released album, Reflections. The song featured the best of the band with high-hitting vocals, catchy guitar riffs, crazy changes and shifts and a sweet, deep beat that immediately had the audience’s head and shoulders undulating with futuristic ska vibes. It was made even more complete with a surprising progressive breakdown that grabbed the ear and kept the audience grinding away.

After the gig, I caught up with a couple members of Brothers Gow on the SOhO patio for a short interview. “The mix was amazing and you guys were incredibly tight for how much sound you produce, how did you develop that?” I asked Wade as he leaned back, cigarette in hand. “Thanks man! We have put in a lot of work over the years and just jamming together for so long has really helped,” he smiled.

“You guys seem to move effortlessly between genres. What do you attribute that to?” I asked Bastine. “I think that we all kind of have our own ideas for a song. Then when we come together, everyone gets to help write the song and turns it into something totally different. Our sound melds together easily like that,” said Bastine.

I realized at that moment that there wasn’t any secret to their wild and full grooves, but in fact it was purely the talent and connection they had with each other that allowed them to create unadulterated, beautiful music. Brothers Gow filled SOhO with their awesome sound, delighting our ears and feeding our souls.