The Daily Nexus
News
Protesters Flood Santa Barbara Streets In Wake of Ferguson Verdict
November 26, 2014 at 6:57 am by Carissa Quiambao and Peter Mounteer 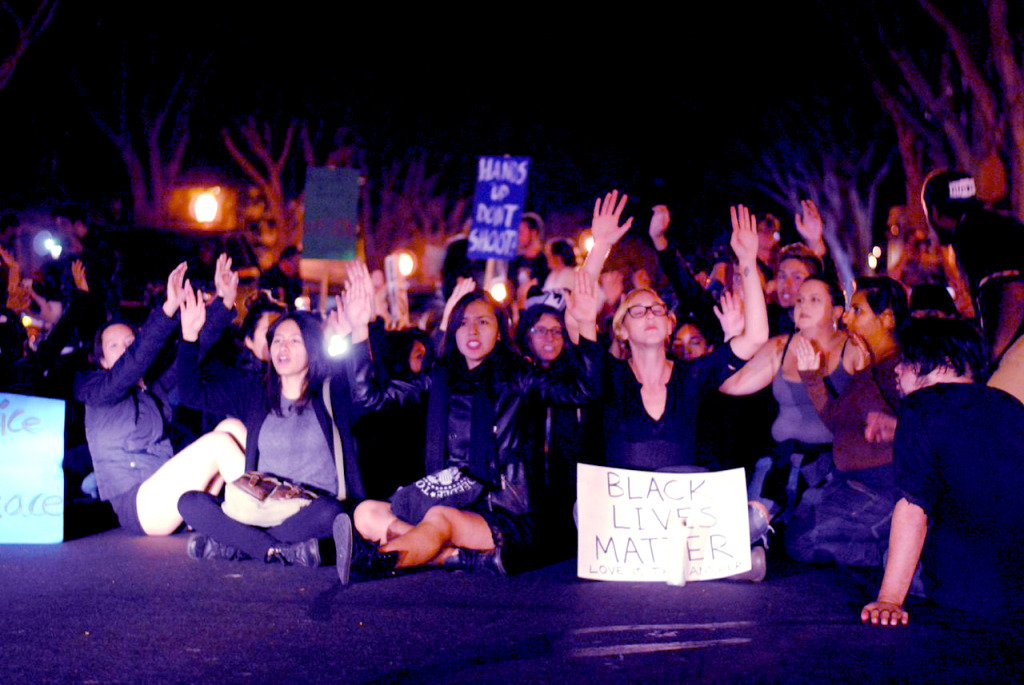 Hundreds of students, Santa Barbara residents and other local community members rallied and marched throughout the streets of downtown Santa Barbara last night in protest of Monday’s grand jury decision not to indict a white police officer from Ferguson, Missouri, who shot and killed unarmed, black 18-year-old Michael Brown.

After the decision by a St. Louis County grand jury to bring no criminal charges against officer Darren Wilson for fatally shooting Brown, violent protests broke out in Ferguson, with 60 people arrested and multiple buildings burned. Following Monday’s unrest, numerous demonstrations have been staged throughout the country, including protests in downtown Santa Barbara last night following the creation of a Facebook event titled, “Justice For Mike Brown, Santa Barbara.”

According to Santa Barbara Police Department (SBPD) spokesperson Sgt. Riley Hardwood, roughly 500 people showed up at the peak of the demonstrations, with attendance fluctuating to a minimum of around 250 attendees toward its end.

Hardwood said officers were equipped with 37mm and 40mm grenade launchers capable of firing foam projectiles as well a pepper-spray balls, shields, batons, helmets, grenade launchers, K9 units and an armored vehicle primarily for protection and for blockade and transportation purposes during the protest.

Racism is alive and well in the United States. While it may not be Jim Crow … it’s very alive and it’s very real and it effects students every single day. Why is it that UCSB only has a 3 percent black population? — Anumita Kaur 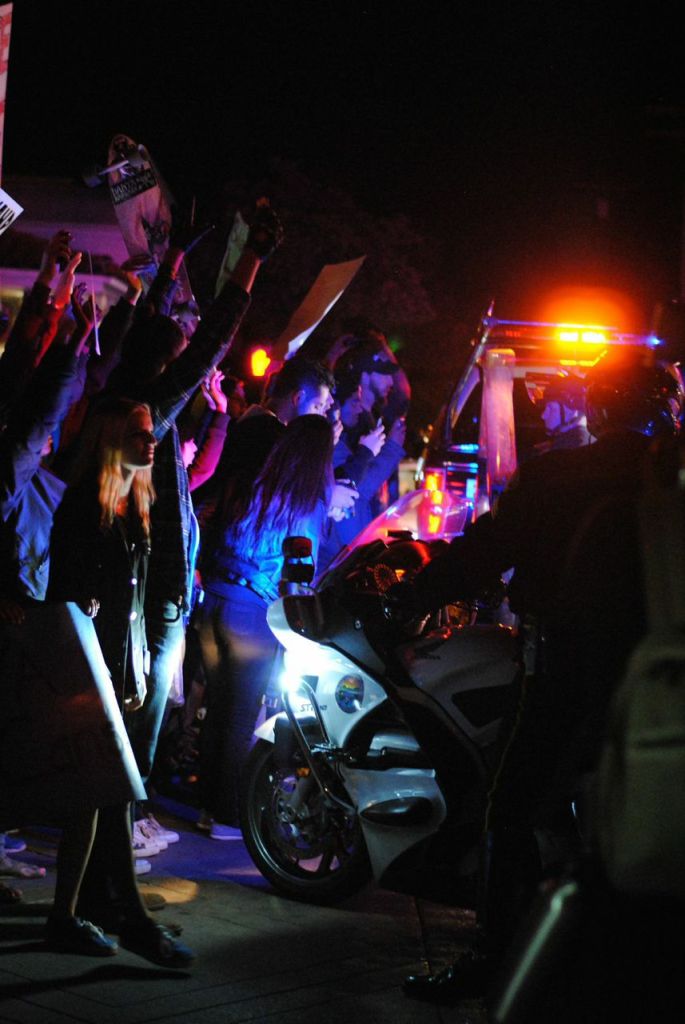 “Our experience not too long ago with the Deltopia riots was that we had a lot of stuff thrown at us,” Hardwood said. “If you were a police officer you’d be foolish to stand there and not wear your protective gear. That’s really an unreasonable expectation for people to expect a law enforcement officer to protect themselves when you anticipate getting rocks and other projectiles thrown at you.”

The protest began at the Santa Barbara County Courthouse then wound throughout the streets of downtown Santa Barbara, gaining more participants until a confrontation toward the freeway, where law enforcement blocked protesters from impeding traffic with riot shields and police vehicles. After one protester tried to shove officers in an unsuccessful attempt to break the blockade, the individual turned around and left the protest along with other discouraged demonstrators, Hardwood said.

Chanting phrases such as “Hands up, don’t shoot!” “No justice, no peace! No racist police!” and “Black lives matter!” throughout the demonstration, protesters then marched up and down State Street shouting “While you are out shopping, our bodies are dropping!” until finally arriving at the SBPD police station on Figueroa and Santa Barbara Street, where protestors were met with officers blocking the crowd from the police station, in full riot gear. Demonstrators then sat at the intersection and listened to several speakers address the crowd in front of SBPD riot shields, including speaker and Santa Barbara pastor at the New Covenant Worship Center David Moore.

“I’m glad that we are here tonight,” Moore said to hundreds of gathered protesters, “Because of our cameras, because of our phones — what we can say is the whole world is watching.”

The fact that people all the way in Santa Barbara came together and focused on peaceful protests, I think that it was very important on how we can move forward and bring change in our justice system and society as a whole. — Ryan Fluence

“Racism is alive and well in the United States. While it may not be Jim Crow and it may not be separate water fountains, it’s very alive and it’s very real and it effects students every single day,” Kaur said. “Why is it that UCSB only has a three percent black population? … Why is there no one that looks like me on campus?”

According to protester, local organizer and activist Martin Leyva, who noted that last night’s crowd comprised of a diverse group of people “across different generations and different economic lines,” the situation surrounding Monday’s grand jury decision in Ferguson represents larger issues in America regarding judicial and law enforcement treatment of black people and people of color.

During the protest, demonstrators chanted phrases such as, “What do we want? Justice! When do we want it? Now!”, “Hands up, don’t shoot!”, “No justice, no peace! No racist police!” and “Black lives matter!” Christina DeMarzo/Daily Nexus

“We need to stand in solidarity with the injustice that happened in Ferguson. Mike Brown represents a greater picture of what’s going on in America,” Leyva said. “A lot of black lives get shot and murdered every day. When is enough, enough? What’s happening in Ferguson, it affects us all.”

Fourth-year political science and global studies double major Ryan Fluence — who is a campaign coordinator for I.G.N.I.T.E., a University of California Student Association (UCSA) campaign to divest in prison systems and invest in education — attended the protest and said last night’s demonstration exemplified local and national unification against racism both in Ferguson and throughout the U.S.

“There’s unity in the community,” Fluence said. “The fact that people all the way in Santa Barbara came together and focused on peaceful protests, I think that it was very important on how we can move forward and bring change in our justice system and society as a whole.”

We keep talking about the U.S. being a post-racial society and clearly that is not the case in actual practice. Clearly black lives and brown lives are not treated equal to white lives, and that’s a problem.  — Aviva Milner-Brage

Fluence also said that while mainstream media outlets have focused on racial tension between officers like Wilson and black teenagers like Brown, he believes the situation in Ferguson highlights the need for reform within the U.S. judicial system and in law enforcement tactics.

“The way the media played a part in framing it initially, as black teenager shot by white cop … that made people feel that they had to choose a side,” Fluence said. “I decided to focus less on how race played into the incident and more to how it was police brutality. … I.G.N.I.T.E. on campus focuses on … the prison industrial complex and how it targets black youth of color.” 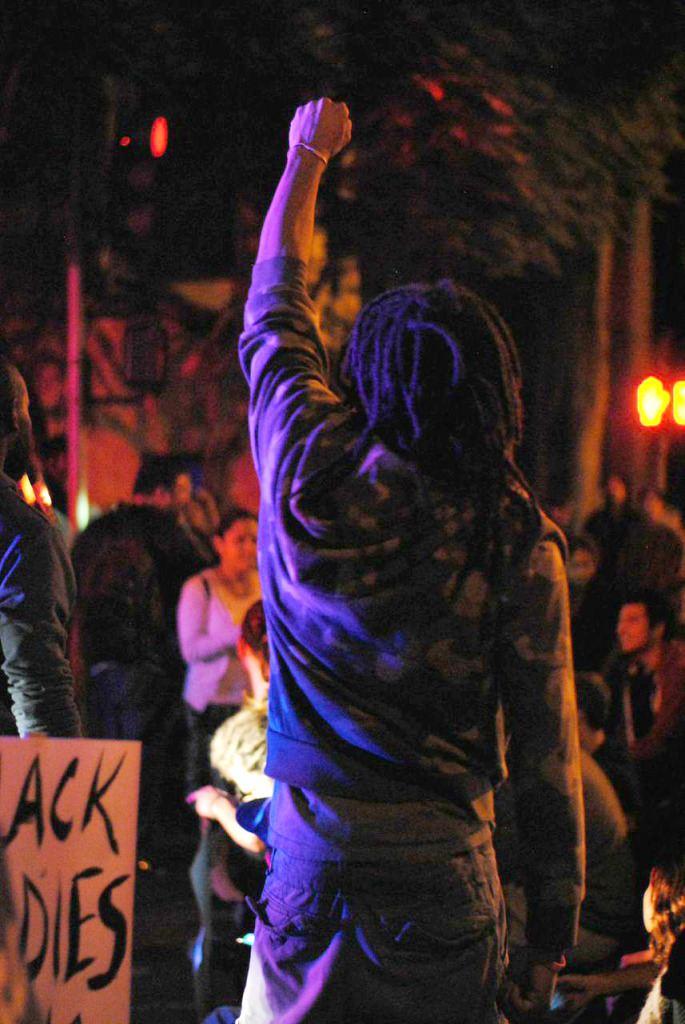 Santa Barbara protesters, most of whom were students, expressed their discontent with the Ferguson verdict as well as their local support for protests across the nation. Christina DeMarzo/Daily Nexus

According to protester Aviva Milner-Brage, ethnomusicology graduate student and Chair of UCSB’s chapter of UAW 2865, the University’s Teaching Assistant’s (TA) union, the recent grand jury decision on Brown’s case served as a reminder to citizens throughout the nation that black people and people of color face unequal treatment from people who are in authority and are white.

“We keep talking about the U.S. being a post-racial society and clearly that is not the case in actual practice,” Milner-Brage said, “Clearly black lives and brown lives are not treated equal to white lives, and that’s a problem.”

Milner-Brage also said last night’s protest, along with all other similar demonstrations, serve as the starting point of a local and national movement toward institutional change.

“I think people need to continue having demonstrations like this to actually affect public policy and show juries and judges that this is not appropriate behavior,” Milner-Brage said, “That we need justice for all.”

Why are these people protesting about a bully who accosted an armed officer. I think young people just like to get angry about stuff and puff out their chests. If black lives matter, then stop shooting each other in the streets over drugs and gangs. These protesters need a reality check.

First of all, you should replace that period at the end with a question mark. Second of all, while teenagers do like to get angry, they do have things called “concerns,” which stem from things called “emotions.” And they want to address those concerns. What can they do if they all have the same concern over a major issue and they want to be heard and cause change? Protest! There you go. And that penultimate sentence just screams racist. I have a feeling that the day anyone takes someone like you seriously will be the day all the planets of… Read more »

These students have been indoctrinated through the liberal educational system. They have no respect for authority. Their minds were made up regardless of the outcome of the grand jury verdict. As for the three percent of blacks that make up the Santa Barbara, I have been in Santa Barbara nearly thirteen years and have seen a growth within the black community. We strive for a crime-free county and welcome law abiding citizens regardless of race and color. My only wish is that there were more black-owned businesses in town. I would personally frequent their business so that they would prosper… Read more »

If it weren’t for students that had undergone “liberal brainwashing” disrespecting authority in the past, you might not be enjoying many rights as a minority woman now.

I think the whole MMA UFC thing is causing the cops to become both more fearfull and more aggressive.

Mike was a big man, and he though he’d scuffle with the cop.

They are gonna shoot you now.

Why is it that UCSB only has a 3 percent black population? Its pretty obvious. The general lure to a beach life school and getting a tan year round is not one african-americans first desires; and also living in one of the most expensive rental markets in California. Coming from both black and white parents, i can tell you that the culture is inviting for me, but only because i grew up in a mostly white area and have many friends. UCSB is a great school, but on the surface the black community around here takes a back seat. I… Read more »