The Daily Nexus
Opinion
Embrace Being the Transition Generation
November 24, 2014 at 9:13 am by Ben Nguyen 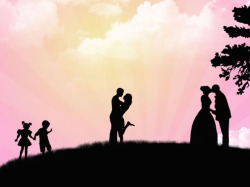 “From child to adulthood” by Walnieta. Image courtesy of deviantart.com

Our generation has been through and seen a lot. From an unknown author, “[We’ve] been in two millenniums, two centuries, three decades, witnessed the election of the first black president of the USA, the falling of the twin towers, Bin Laden’s death, a royal wedding between a prince and a commoner, and the end of the world.” All of this, and some of us aren’t even 21 yet.

But when I call us the transition generation, I don’t mean that we’ve experienced a lot. Nor do I mean that we are at an existential crossroads. We are currently in a revolutionary transition period wherein more traditions are being questioned than ever before – something I like to call “transitionalism.” Whether the topic is body modification, sexuality or technology, we as a whole can choose to accept or reject this new way of thinking to shape society into what we want it to be.

That’s a bold statement – I know. Anytime someone talks about how “you should be the change you want to see in the world” blah blah blah, it’s met with eye rolls and scoffing. It’s all talk. But in this case, it’s different. It’s not just one group of people fighting for what they believe in – it’s an entire generation that can reshape the world for generations to come.

Let’s use technology as a conservative example. Right now, my classes are split about 50/50, with half the class taking notes by hand and half the class taking notes on laptops. And even though I’m an advocate for taking hand-written notes, I still find myself typing in section and days where I’m just too lazy. This is an example of the tipping point, and we can either choose to embrace technology or regress back to traditional pen and paper. This “tipping point” is happening all around us.

I called technology a conservative example of transitionalism because your decision to write in a notebook or type on a laptop doesn’t really affect the lives of others. Unless you’re that kid that texts from your MacBook with the sound on, or the one that ferociously clicks their pen, no one will care whether you write notes or type them. On the other hand, we have traditions being questioned that can dramatically change the lives of other people around us. A typical example of this would be gay marriage.

About 10 years ago, the general consensus would tell us that gay marriage would not be acceptable in any form. However, opinions are changing. Public opinion in the United States shows majority support for the legal recognition of same-sex marriage. This support has remained above 50 percent consistently in opinion polls since 2010, after having increased steadily for more than a decade. This is an example of transitionalism that can change people’s lives for the better, but only if we choose to embrace the change rather than regress back into old traditions.

Now, I’m not here to impose my beliefs on you – I’ll leave that to the politicians. But I do urge the act of assessing the traditions being questioned and making a conscious decision of which direction you would like to follow. If we collectively pursue what we believe to be the better of our options, the future for following generations and us will be promising.

However, that’s not to say that this movement is neither permanent nor absolute. Transitionalism is constantly happening, and it peaks in waves. Should we choose to go against tradition, we will ironically form a new tradition – which can be questioned later down the line. Additionally, it can be publicized (like gay marriage) or it can be discreet (like tattoos). In the case of tattoos, our generation is more accepting of tattoos than generations preceding us – which will eventually make them commonplace. This would be a classic example of discreet transitionalism.

I believe that currently, we are at a peak level of transition – a time where many things are being questioned and a multitude of decisions must be made. Some of these decisions are personal, and can be made at a personal level. Such is the case with tattoos. Other questions and decisions must be discussed at a much higher level, such as the case with gay marriage. Either way, if an opinion is formed, voice it – voice it to have a say in what our future looks like. And if you would just rather go with the flow, then I suggest keeping an open mind to the changes occurring around you.

Ben Nguyen just finished going through his own “transition period” and now he’s stuck right back in another.