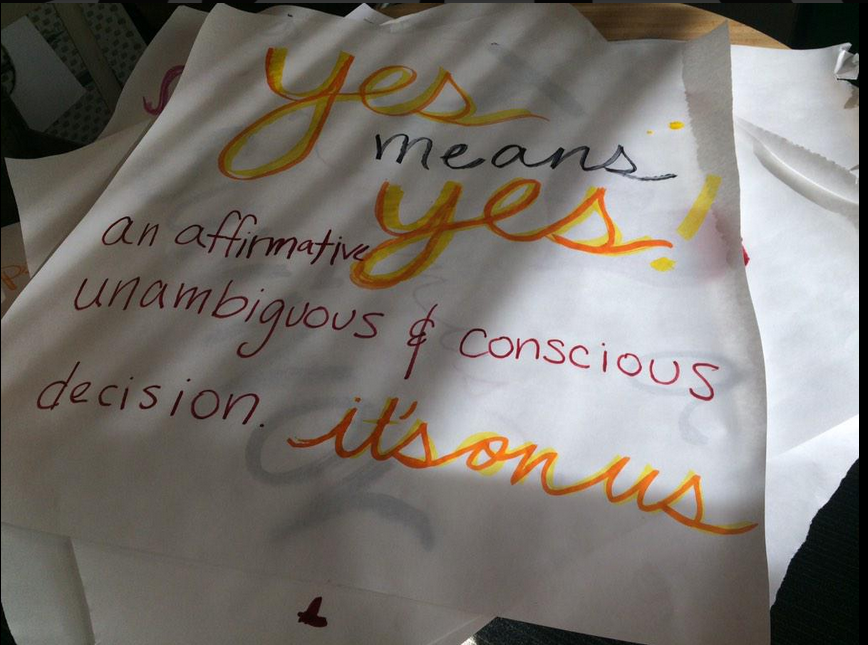 CARE’s It’s On Us campaign to prevent sexual assault on college campuses ended with a rally on Friday. Throughout this past week’s It’s On Us Week of Action campaign, students signed pledges and wore buttons to demonstrate their support.
Photo courtesy of UCSB CARE Twitter account @ucsbcare

Campus Advocacy for Resources and Education (CARE) led a rally Friday as part of the national It’s On Us initiative, a campaign led by President Barack Obama’s administration to prevent sexual assault on college campuses.

The rally marked the end of the It’s On Us Week of Action, which ended this past Friday, during which students signed pledges and wore buttons to demonstrate their support for the campaign. Student a-cappella group InterVals opened the rally with a performance, followed by speeches by CARE staff members Hannah Brown and Emily Potter on the social complexities of sexual violence and how the university can take action to prevent sexual abuse. They were joined by co-chair of Take Back the Night Gema Hernandez, Senior Associate Dean of Student Life Debbie Fleming and California Senator Hannah-Beth Jackson staff member Liora Goodman.

Third-year political science major Hannah Brown, a CARE staff member and one of the main organizers of the event, said she wants the campaign to inform students about what CARE can do for those who have been sexually assaulted or for those who know someone who has been a victim of sexual assault.

“Our main message for survivors is that we want to create an environment that’s accepting and not shameful,” Brown said. “We want survivors to know that they aren’t alone and we are here to support them. As for people who aren’t survivors – if you see something we hope you will step in and protect your friends and people you see on the street.”

According to third-year sociology major and event organizer Emily Potter, the university officially registered with the It’s On Us campaign last month and said while the CARE program has been addressing college sexual assault for years, the issue itself is getting more substantial attention nationally.

“We’ve been trying to raise awareness of the issues surrounding sexual assault for years and I think it’s finally, nationally, getting the attention it deserves,” Potter said. “Nothing groundbreaking, but it’s picking up.”

“I was raped when I was 15,” Potter said. “The first person I told said to me ‘Don’t even pull that shit on me when you admit that you had sex.’ That was when the seed of doubt was planted in me.”

Brown said she believes the event was a success considering the large participation CARE saw throughout the week.

“I think people are standing up and saying ‘Hey, this is something I really want to support,’” Brown said. “Especially because we’ve been doing our pledge drive this week and tons of people – hundreds of people – have come in and signed our pledge. It’s really great to see the support from all the students once they’ve seen what the issue is.”

According to Potter, who opened her speech with the It’s On Us pledge, the campaign is important in light of the lack of support society gives survivors.

“I pledge to create an environment in which sexual assault is unacceptable and survivors are supported,” Potter said. “Currently we do not have that environment. For some reason, we seem to find it easier to believe the perpetrator over the survivor.”

Second-year film major Timmy Linetsky attended the It’s On Us rally and said he was proud of the speakers and campaign organizers for sharing their stories and advice.

“I thought some of the stories people shared were really brave,” Linetsky said. “My best friend gave a speech today and I thought that was incredible.”

[CORRECTION: A previous version of this article switched Emily Potter and Hannah Brown’s quotes, attributing Brown’s quotes to Potter’s and Potter’s quotes to Brown. In addition, the article stated that Senator Hannah-Beth Jackson’s staffer’s name was “Laura” Goodman instead of the correct Liora Goodman. The Daily Nexus has updated the article and deeply regrets these mistakes.]

Women coming out to share their terrible experience is one thing, and maybe it is theraputic for some, but about teaching women to maim or otherwise permenently scar the men to attack them would be a better investment in safety. Having a collection of eyeballs and huevos from the dirtbags would really help prevent this kind of thing from happening again. Need to teach these guys a lesson.