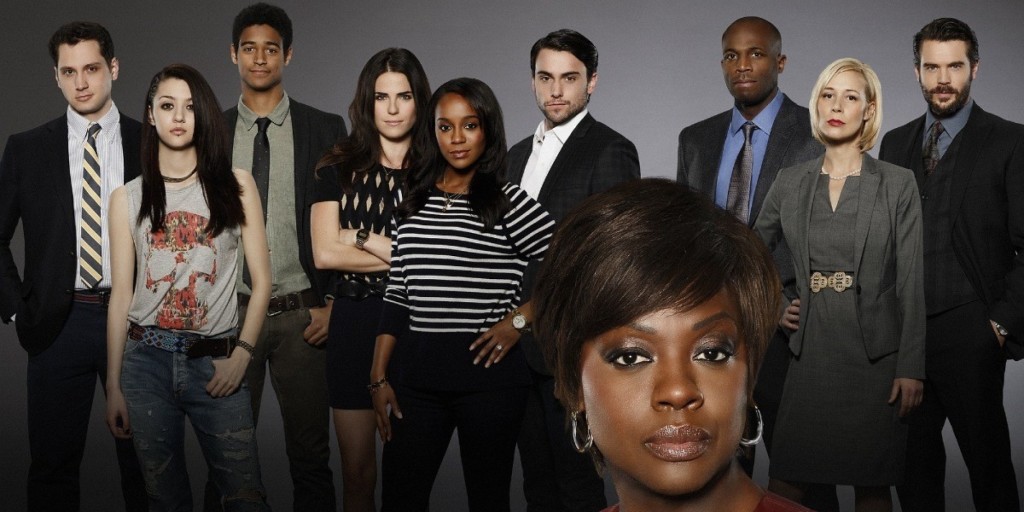 Close the books, take a break from the gym and treat yourself to an hour of hot law students, sex scandals, love triangles, lies and murder. You deserve it. You deserve to be swooned by hopelessly romantic Wes. You deserve to get cramps from laughing at Asher’s douchebag jokes. And most importantly, you deserve to let Annalise Keating make you feel like a strong, independent woman! (Or man. It’s all about equality.) That’s right, I’m telling you to make time on Thirsty Thursdays for a new episode of “How to Get Away with Murder”. Not convinced, yet? Here’s how the top dogs in Hollywood put together a show so good that it should be illegal.

Step 1: Find Scandalous Producers with a Knack for Female Anatomy.

ABC’s new hit show “How to Get Away with Murder” is brought to us by none other than the fabulous Shonda Rhimes, Peter Nowalk and Betsy Beers. These names don’t ring a bell? Let me help you out. Rhimes, Nowalk and Beers are the creators and executive producers of “Grey’s Anatomy” and “Scandal”. It’s safe to say that they know a thing or two about strong female leads, hot love triangles and scandalous plots. “How to Get Away with Murder” tells the story of how Annalise Keating, a prestigious law professor and attorney who takes bullshit from no one, and her over-zealous students get involved in a murder plot. Think “Scandal” meets “Pretty Little Liars”. It’s edgy, funny and captivating. Who knew something as harmless as wallpaper could turn a person into a murder suspect? Warning: You WILL start questioning and psychoanalyzing your friends like a mini-detective.

Step 2: Get a Lead Actress That Helps Bring the Show to Life.

Viola Davis stars as lead character Annalise Keating and, to be honest, no one could do it better. She’s a veteran in the business with roles under her belt like Aibileen from “The Help”. Davis’ infamous side-eye and crying-face give viewers the feels and make Keating into one determined, fierce woman. She’s taken the strong, female lead character to new territories by baring all — no makeup, no wig and (sometimes) no clothes. Davis as Annalise Keating is clever, sexy and unapologetic. Just like her faithful law students, we can’t help but want to be just like her. But I guess we’ll just have to settle for watching her performance in the next episode of “HTGAWM”.

Step 3: Assemble a Magical Supporting Cast to Lock It All In.

So unless you live under a rock, you’ve probably noticed that some of the “HTGAWM” actors look familiar. If you’re like me, you probably wish you had a boyfriend as sweet as Wes, but have you ever noticed he was in “Harry Potter”? Alfred Enoch, who plays the super fit, doting sweetheart willing to do anything to protect his neighbor from going to jail, played Dean Thomas in all of the “Harry Potter” movies. Oh yeah, team Gryffindor! No wonder we’ve got a soft spot for him.

And if you loved Matt McGorry as the dreamy Officer Bennett in “Orange is the New Black”, check him out as Asher, the privileged douchebag with the inappropriate sense of humor. Unfortunately, we don’t get to see the stud in uniform in “HTGAWM”, but they did give us a pretty hot (and hilarious) dance scene.

But even the less familiar actors deliver some amazing performances. Michaela (played by Aja Naomi King), the goody-two-shoes kiss-up, never fails to make us cringe and reminds us of someone in our own lives who is that annoying. And let’s all just admit that Connor (Jack Falahee) has the most epic sex life on the show (even steamier than Annalise’s). Basically, the supporting cast demands our attention just as much as the leading lady.

If you haven’t started watching yet, you’re in luck because you only have about seven episodes to catch up on. So if you’re looking for a new show with a cast who is equally talented as they are attractive, and a murder plot that keeps things interesting and makes you feel like Sherlock Holmes, then it’s time to become a part of the “HTGAWM” fandom.

Don’t forget to catch “How to Get Away with Murder” on ABC Thursdays at 10p.m. Jessica Gresham lives for Thursdays.