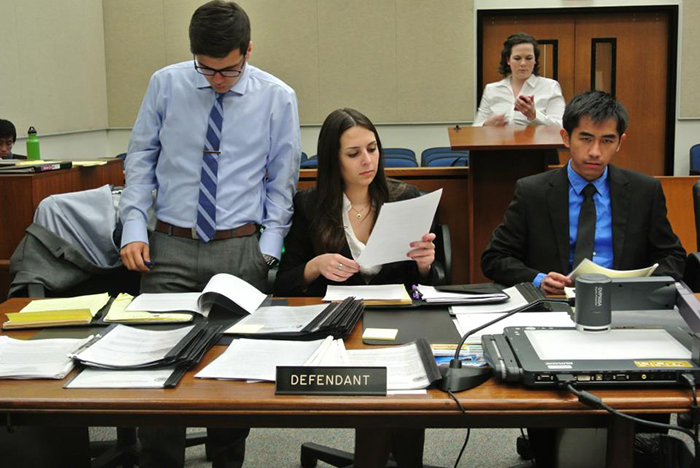 UCSB Mock Trial will fly to New Haven, CT, to compete at the 2014 Yale Invitational, which takes place on Dec. 6 and 7.

Six members of Mock Trial will attend the tournament, which will be the organization’s first competition ever on the East Coast. Of the 40 teams participating, UCSB will directly compete against four randomly selected teams in two civil trials per day, in which the teams will alternate as plaintiff and defendant.

According to Mock Trial Vice President and second-year history major Cheryl Wilson, the invitation to Yale is a sign of Mock Trial’s strong reputation as a competitive team.

“The way that invitationals usually work is that teams from the area are invited. But for the larger tournaments, they try to recruit teams from the larger areas in the U.S., because at nationals, you go against teams from all over the country,” Wilson said. “So if you’re a well known up-and-coming team from another geographic area, you have a much better chance of being invited.”

“It’s also a good learning opportunity, because we’ve never seen the styles and the specific attorneys from the East Coast. We definitely could learn a lot from them,” Russell said. “We see the same teams at every West Coast invitational, and we know almost everyone by name. It becomes kind of a small club.”

Wilson said the East Coast teams have a large presence in the national competition, which will take place next year.

“California is a very competitive state for Mock Trial, and we definitely have a pocket of good teams here, but just because there’s so many colleges on the East Coast, a lot of the major teams that win the national competition are from there,” Wilson said. “I would say two or three out of the top 10 teams are usually from California, and the rest are from the East Coast. So for us, it’s an experience to go against upper-level competitors.”

“This is really our first step on the east coast, so how well we do here will definitely influence our national reputation,” Cavarno said.

According to Cavarno, the six student participants to the Yale invitational have been holding extra practice sessions, but the competition is similar enough to past tournaments in that it will not require a change in the team’s practice style.

“We’ve been preparing really hard for all of our invitationals, and because they all follow a similar format, we don’t need to prepare specifically for Yale,” Cavarno said, “but I would say that we’ve been preparing a little bit harder.”

According to Russell, presentation is an important aspect of securing a trial victory.

“When you’re making an oral argument, like an opening statement, it’s obviously important to have good content,” Russell said, “but what’s often more important is good presentation.”
Wilson said the mock trial team members are confident in their ability to succeed in the competition.

“We’re going out there to bring the UCSB name out to the East Coast,” Wilson said.