Beyond the beaches and beautiful weather of Santa Barbara lies a prevalent homeless population. Since 2008, however, the organization Doctors Without Walls — Santa Barbara Street Medicine (DWW-SBSM) has provided healthcare to the under-served, with much of their work accomplished through developing a mobile electronic medical records (EMR) system. 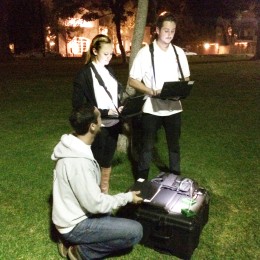 The organization, which sets up their clinics in the middle of public parks in downtown Santa Barbara, recognized that the lack of power outlets or readily available WiFi necessitated a mobile internet enabled system.

Cole Denkensohn, who graduated from Santa Barbara High School in 2009 and UCSB in 2013, used his programming skills to pick up where previous student volunteers left off in completing the transition to electronic records for DWW-SBSM.

“Existing systems had various obstacles. Some were too expensive for our non-profit to afford. Others were very rigid in their design or difficult to modify. This was a challenge for us since the street medicine model is in many ways different than traditional medical models,” Denkensohn said. “As a small organization we do not have the staff to constantly manage servers and other hardware, so we needed a managed solution.”

According to Denkensohn, the maintenance of the underlying program mechanisms that keep the system running and up-to-date was a primary issue.

“The major considerations were security, maintenance and flexibility,” Denkensohn said. “The system had to use an encrypted connection but still be accessible in public spaces rather than an internal network. It also had to be accessible by multiple users at the same time while still protecting against data corruption.”

The development of the homegrown EMR system involved several UCSB graduates, as well as a former Centers for Disease Control and UCSB alum Dr. Daniel Fishbein.

Denkensohn and his colleagues decided to build on top of preexisting services and software to create their own EMR system. Microsoft Access Database running on Office 365 was incorporated into the project, which allowed for web applications to run within a cloud based system.

“All of these new Microsoft technologies come together to create the perfect secure, multi-user, managed system for the development of our EMR,” Denkensohn said. “By using this platform, very complex tasks become very easy to handle.”
With the latest program design, the medical note takers for DWW-SBSM have more access to patient information and more time to interact with patients.

“Since this is a web-based platform, we paired the software with Chromebooks: a $200 laptop that is lightweight, durable and essentially runs on a web browser,” Denkensohn said. “We also use laptop carriers that allow our volunteers to type, move and interact with patients at the same time.”

The EMR system is convenient to use at the parks where the DWW-SBSM clinics are set up.

“It takes around five minutes to get the system up and running. We store our seven Chromebooks, hotspot, and laptop carriers in a military-grade case,” Denkensohn said. “As soon as we arrive at the parks, I fire up the WiFi hotspot and bring the first computer to triage, triage signs in and I begin setting up our medical note takers one at a time.”
The EMR system is currently fully functional and DWW-SBSM has made the full transition from paper to electronic, but the system continues to grow.

“The possibilities are almost limitless. That is not to say that the system itself is without limitation. For example, I do not have nearly as many coding options, to control both the styling and the function, as I would if I had coded the platform from scratch,” Denkensohn said. “What we gained was security, instant accessibility of all past charts for a patient, legibility, more detailed records, more accurate reporting and much more.”