The Daily Nexus
Music
Mac DeMarco Turns Hub into Jungle Gym: Plus the Inside Scoop on the DeMarco After Party
November 20, 2014 at 6:53 pm by Ryan Mandell 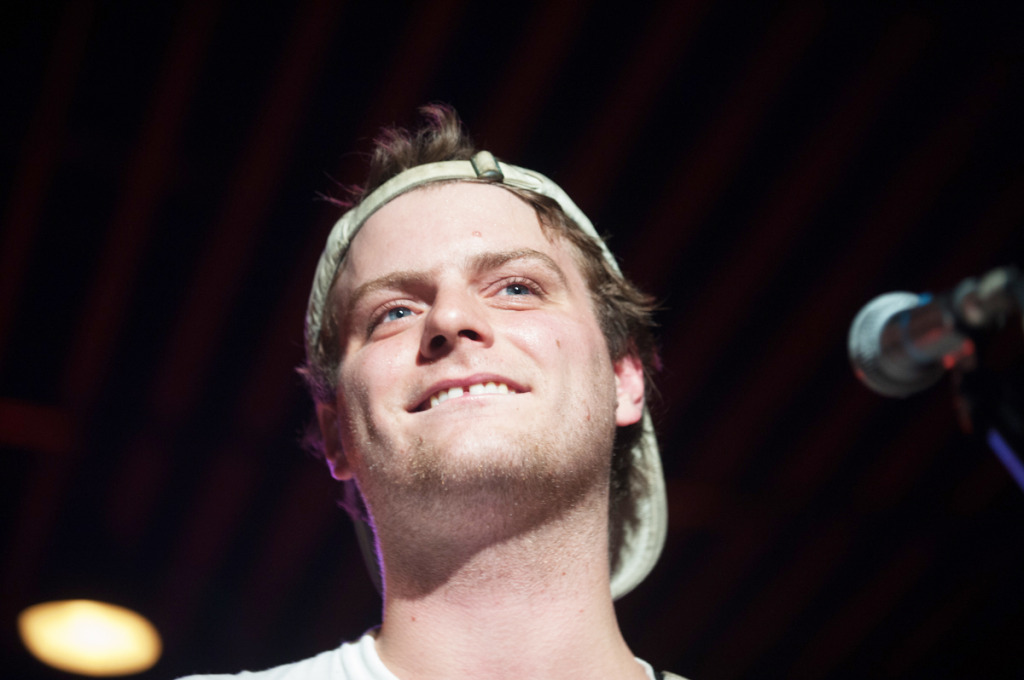 Tucked into a triangular nook of the hub’s ceiling beam, the gap-toothed indie-rocker grinned down at the crowd below him. Screaming girls and sweaty boys stretched their hands and fingertips up towards the radical act, eyes sparkling in awe. Onstage, his band grooved through the now-electrified air while they watched their frontman slip out of sight, climbing up and over the railing onto the second floor of the Hub. Mac DeMarco was nowhere to be seen.

The crowd crept onto their tiptoes for the long minute that preceded DeMarco’s return to the stage, while wild hypotheses of what was to come next flooded their heads. DeMarco mysteriously reappeared on stage and gave his microphone a few pats. A slight raise of the eyebrows and a gentle shoulder shrug signaled that something was off — the microphone had been shut off. The crowd’s short exaltation was muted as they watched DeMarco proceed to be detained by the UCPD.

A police officer forcefully grabbed him from behind, twisted his arm and pushed him off the stage. The Canadian singer’s mouth dropped and he turned his head around to look at his aggressor. After the initial shock wore off, DeMarco’s smile and eyes brightened and widened to form his classic crazy face, the one that glints with all the absurdity and humor of this world we live in.

Before the showstoppers botched the merrymaking Mac DeMarco and his band took the stage around 10 p.m. They jammed through some favorite tunes including: “Ode to Viceroy,” “My Kind of Woman,” “Freaking out the Neighborhood,” “Blue Boy,” “Still Together,” “Cooking up Something Good” and a gritty and hilariously overzealous cover of Deep Purple’s “Smoke on the Water.” The crowd pushed, swayed, moshed and sang along to every song. Sweat poured off audience members as they packed themselves together and got rowdier than Tasmanian devils to DeMarco’s sweeping blues-wave melodies.

In between songs, the frontman casually prodded the audience in a sly tone, “So I’ve been told that there might be some kind of afterparty going on around here tonight, I heard you guys get into stuff like that?” Loud jeers could be heard from a select few students that knew exactly what DeMarco was alluding to. I happened to be one of those cool cats in the know; he was going to be at a party at my neighbor’s house. My eyes lit up at the possibility of drinking a beer and smoking a Viceroy with the guy.

After the mayhem, I immediately headed to I.V. Deli Mart to rehydrate my sweat-drenched body with a coconut water, and then was off to my next door neighbor’s house party to see if I could catch a moment with the outrageous artist. I pushed open the large gate and saw the neon turquoise light of the pool refracting off the wooden fences and the eyes of the lucky party attendees.

Sure enough, there he was, sitting in the corner of the spa with his girlfriend and drummer, sipping on a cold one and chain smoking away. I wondered if anything could wipe a smile off the man’s face as he chided with his bandmates and pushed out his belly to make himself look like a pregnant woman. One of the residents of the house, senior global studies major Jasmine Salvino, described DeMarco as, “Cool, calm and collected,” even when faced with the out-of-place comments of starstruck freshmen boys and girls.

As the night wound down, I caught a few words with DeMarco after he exited the jacuzzi. DeMarco was relaxed and happy to have a place to chill after the dramatic ending at the Hub. I politely thanked him for playing the show and expressed my deep connection to his album 2, to which he was very grateful.

“How did you define your sound over the years? It’s very unique,” I asked. “I don’t know I guess I just put enough time in to make if feel right. Keep up the positive vibes you know?” he gleamed. I was curious as to how he could smoke so many cigarettes and still hold his voice together.He rolled his eyes, gazed at the ground for a moment and chuckled, looking back at me. “I don’t really, it’s very hard to keep,” he grinned. DeMarco’s drummer, Joe McMurray was standing nearby and eagerly interrupted the conversation. “But he’s got a heart of gold!” he said, leaning over with a grin.

Amidst all of the laughter and amusement it was hard to discern between who had a more memorable night; the concertgoers or DeMarco and his band. From across the yard an unknown fan yelled out, “Hey, Mac, before I leave I have to say that that was my fifth show and this one was by far the coolest show I’ve seen you play by far! It was sick!” The kooky, gap-toothed smile grew again. “Yeah! It was a really fun gig!” Mac DeMarco said with delight as his imagination recounted all the anarchy of the night.

Artsweek would like to offer a special thanks to UCPD for making Mac DeMarco and UCSB students look super PUNK ROCK and giving the community an unforgettable experience. 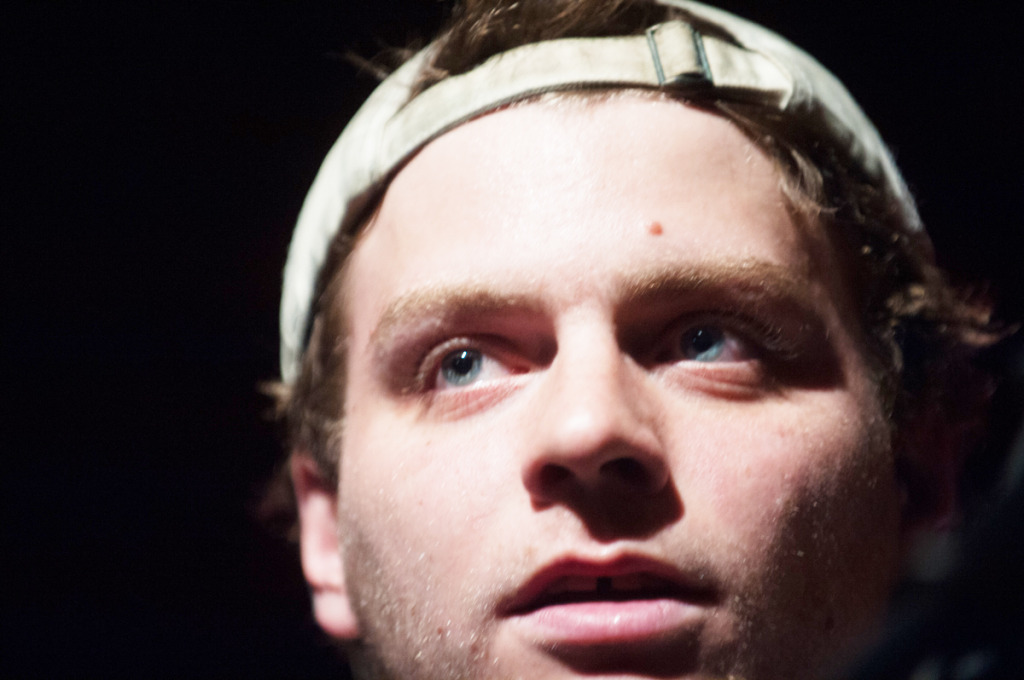 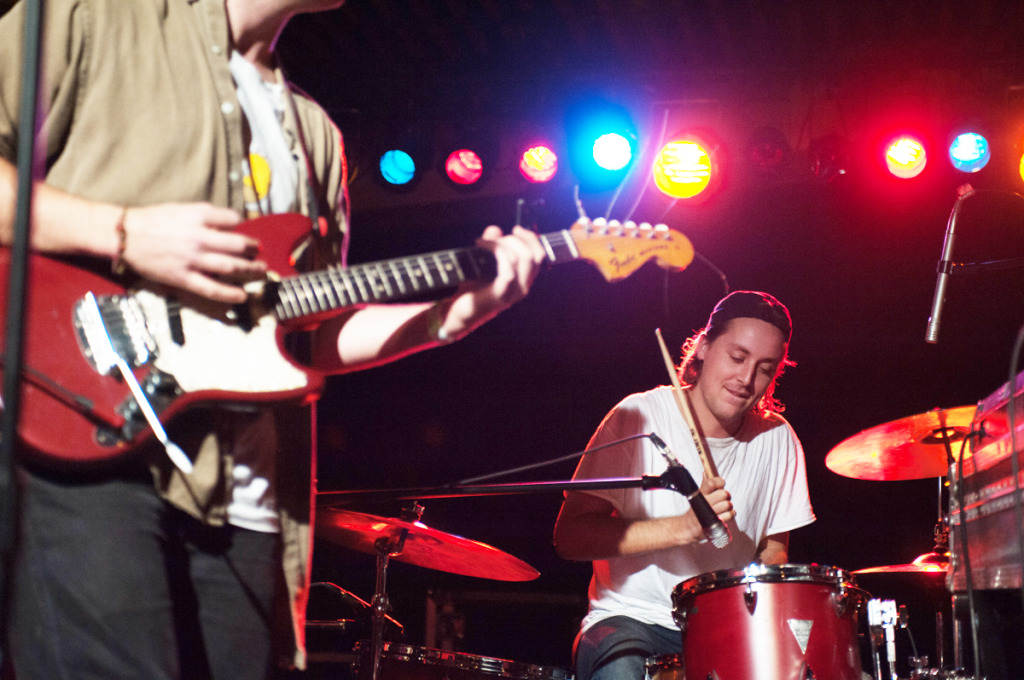