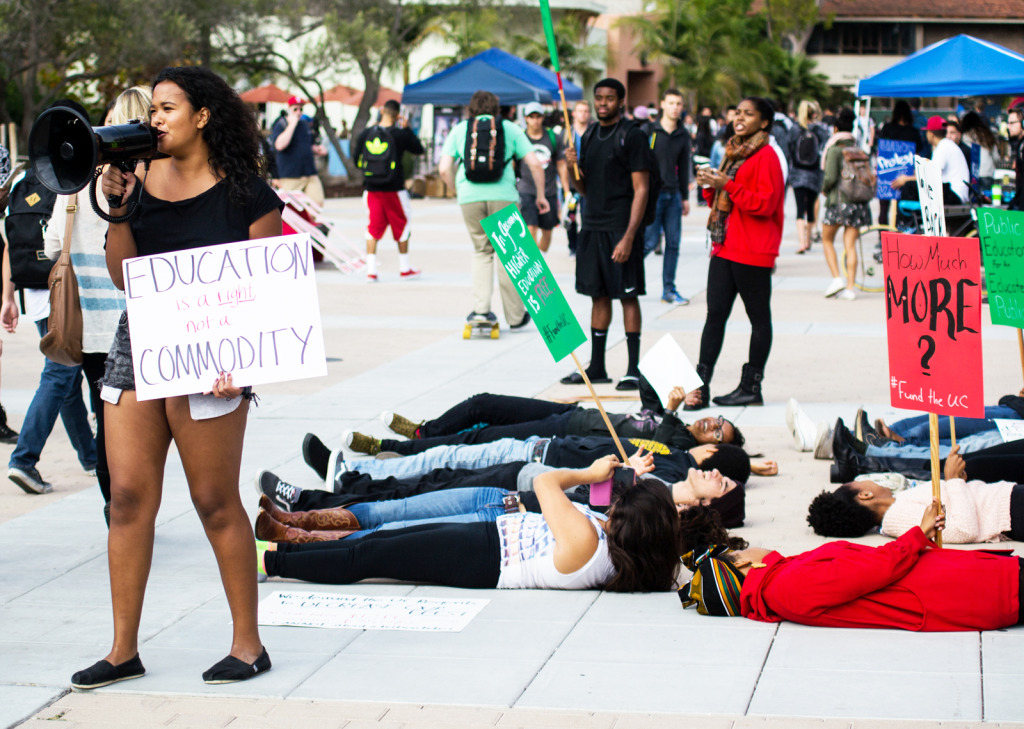 Protesters hold signs in the Arbor in opposition to the UC’s proposal to increase tuition. Cameryn Brock/Daily Nexus

Students and faculty gathered at the Day of Education and Activism event yesterday in the Arbor to protest the proposed UC tuition increase of five percent over the next five years.

The protest featured a series of 45-minute workshops that educated participants on issues such as the UC budget, crashing courses and police presence in California. The Day of Education and Activism event aimed to bring attention to the UC’s failure to submit proper expenditure reports under the Assembly Bill No. 94 (AB 94) signed into law by Governor Jerry Brown in July 2013.

According to Shari Sanders, Ph.D. candidate in comparative literature and the main organizer of Day of Education and Activism, students are unaware of the logistics behind the UC budget and must be educated on budget issues in order to prevent passive acceptance of tuition increases such as the increase to be approved by the UC Regents today.

“The state of California has systematically been taking away education for decades,” Sanders said. “The last time students successfully opposed tuition increases was in 2009 and it is time to stand up in unity once more. If it were not for those student demonstrations, tuition would have been $15,000 more expensive.”

Sanders said the UC has failed to fulfill its obligations via AB 94, which states that the UC must give reports breaking down expenditures for undergraduate and graduate student instruction and research.

“Law AB 94 claims that the UC has to issue an accounting of where the money from the tuition goes and how it was spent,” Sanders said. “However, they recently failed to release this information to court and it has already been six weeks and nothing has been done.”

Ph.D. candidate in ethnomusicology Aviva Milner-Brage said that her biggest concern with tuition increase is that low-income families and undocumented students are the ones most affected by the currently steep costs of attending a UC.

“The undocumented students of low-income families are in tough situations,” Milner-Brage said,
“Their desire to earn degrees is so meaningful to them, and they have to fight even harder for their rights as students. It is not fair.”

Sanders said she knew two students in a summer course who could not afford rent or a comfortable room to live in because of tuition increases.

“In my summer class, out of 18 students, one student lived off a friend’s couch for $500 per month and one student was homeless,” Sanders said.

Milner-Brage said it is essential for Brown to fund the UC because the currently high rates of tuition are negatively affecting undergraduate and graduate students who will continue to face an increasing cost for public education.

“The proposed five percent increase in tuition will only go higher as the years go by,” Sanders said. “Besides this, tuition has tripled the last fifteen years. Undergraduate and graduate students are affected alike, along with middle class families that do not qualify for financial aid.”

Second-year chemistry major Gabriel Castro said although he is a recipient of financial aid, the tuition increases have continued to take a toll on his college career.

“Grants and financial aid do not suffice,” Castro said. “I come from a low-income family. I’m going into debt with loans and it all places a large burden and pressure on me as a student.”

According to Castro, many students face the challenge of graduating in debt and acquiring a job after graduation that does not fully pay back mounting student loans.

“I, along with many of my college peers, am more discouraged to go to school each day knowing that my first job as a graduate will probably not cover everything that I owe,” Castro.

Third-year psychology major Edward Cruz said tuition increases have required him to have a very tight budget, negatively affecting his social life as well as his diet.

“Because of my debt in loans … I cannot enjoy my evenings with friends at restaurants, movie theaters or concerts,” Cruz said. “This, more or less, ruins my college experience of going out with friends to nice things. On top of this, I cannot afford to buy groceries that are healthy.”

According to feminist studies professor Eileen Boris, who spoke about topics at the event such as widespread difficulty to find a stable career, students can benefit from working together with professors in order to lower tuition as professors have prior experience with tuition increase issues and “depend on students to keep their careers afloat.”

“Our jobs, as professors, would not exist without students,” Boris said. “It’s not only a moral and ethical reason to help students, it’s more about going against overpaid administrators that cause students to suffer financially. I’m also a parent which makes me more sensitive to the issue.”

The event concluded with a march to Storke Tower, led by the Black Student Union (BSU). According to Sanders, the march served as an example that student protests cannot be ignored.

“I saw it as a wakeup call from apathy,” Sanders said. “It showed the strength of BSU student activists to make a sight that was impossible to ignore.”

A version of this story appeared on page 4 of Thursday, November 20, 2014’s print edition of the Daily Nexus.