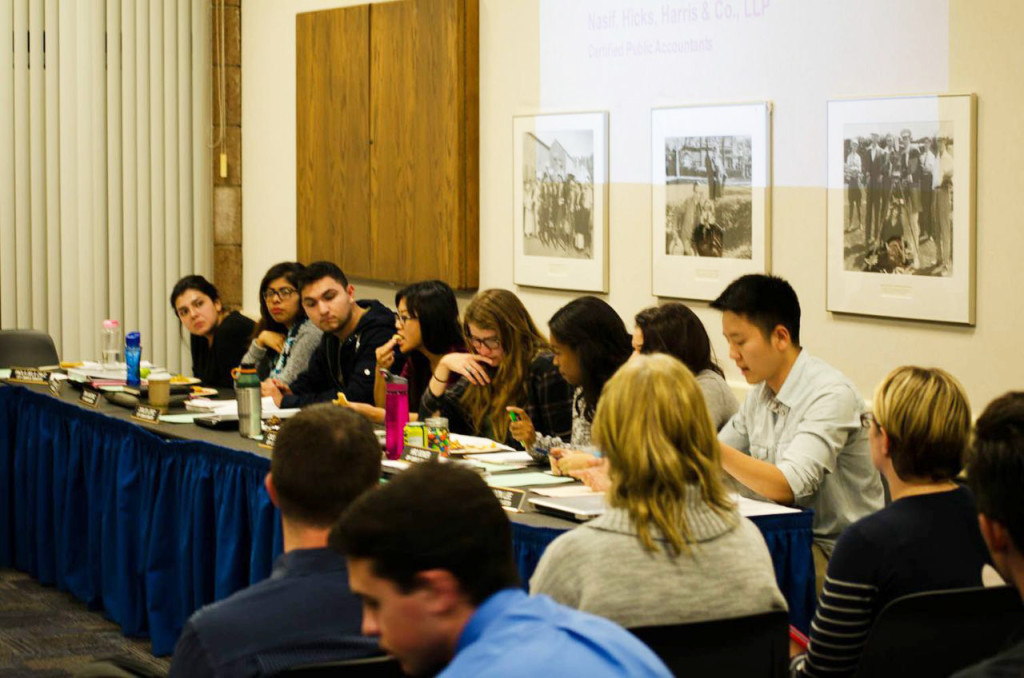 Senate reviewed divestment after receiving a letter from a father of a victim of the I.V. shooting. Will Tran/Daily Nexus

The Associated Students Senate met Wednesday night in the Flying A room of the UCen to discuss a resolution to divest from firearm manufacturers as well as denial of transportation to this Saturday’s Waka Flocka Flame and IAmSu! concert.

Second-year economics and accounting major Sydney Chanu read a letter on behalf of Bob Weiss, father of May 23 Isla Vista shooting victim Veronika Weiss. In the letter, Weiss condemned the alleged connection between the UC and gun manufacturers.

“As parents of a victim of gun violence murder at University of California, it sickens us that the university could be invested in firearm manufacturers,” Chanu read, “With over 30,000 gun related deaths every year, and school shootings occurring almost monthly, the gun industry has blood on its hands.”

Weiss also stated that it is vital students take a stance against gun violence as soon as possible.

“University of California should act as a leader and ban investments in the gun industry,” Chanu read, “me and my wife ask you to divest now.”

Campus Democrats president Krishna Hammond also spoke in support of the bill and said students should investigate the amount of investments the university has tied in gun manufacturing industries.

“It’s unconscionable that not only could we be financially tied to the gun industry that is directly responsible, but also that we don’t even know how much money were in the hole is,” Hammond said.

Hammond also said students should urge the UC Regents to reevaluate their values in regard to where they invest their funds.

“Frankly, it’s unimaginable that the Regents and the administration seems to operate as a Black Ops,” Hammond said. “[They are] invested in extremely negative industries and endeavors. I’m just here to help and ask all of you to vote to divest.”

In addition, DJ Club president Easton Konn said A.S. misinformed him about A.S. Ticket Office logistics, resulting in the club’s denial of funds for transportation to their Waka Flocka Flame and IAmSu! concert at the Earl Warren Showground this Saturday.

“I would’ve been happy using A.S. Ticketing. I think it’s a great system. I had no issue with it, neither did anyone in my organization,” Konn said. “The only issue is we were never told that we had to use it. We were actually told the opposite.”

According to Konn, without A.S. funding for buses he will have to deny thousands of students transportation to Saturday’s concert.

“It’s just really upsetting right now because we have a thousand people on the line, depending on these buses,” Konn said. “I have no idea how to go to all these kids tomorrow and tell them that they can’t get to this concert. I don’t know how to tell them they don’t have buses.”
Senator and Chairman of the Finance Board Jimmy Villarreal said miscommunication occurred between the DJ Club and A.S., but that regardless he did know if A.S. should fund the buses at all.

“The initial presentation was basically, ‘Well we don’t want all these kids drunk driving, so let’s get a bus for them.’ We’re paying for those buses,” Villarreal said. “Do we want to be kind of complicit with all these drunk kids going somewhere in the first place? That’s just a lot of liability that maybe we don’t want to be a part of.”

Correction: This article mistakenly stated the meeting took place on Tuesday, though the intended day was Wednesday. The article has been updated to reflect this information.

A version of this story appeared on page 5 of Thursday, November 20, 2014’s print edition of the Daily Nexus.

Senate actually meets weekly on Wednesday nights. We did not meet on Tuesday.