The Daily Nexus
Sports Blogs
Cash Kings and Drama Queens
November 19, 2014 at 4:45 am by Sarah Stigers 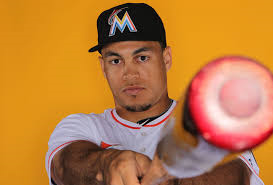 ​It’s been a big week in sports news, and so I couldn’t decide which topic I liked more: Gincarlo Stanton signing the wealthiest contract in sports history with the Marlins, or the football crybabies of week 11.

​First up, Stanton signed a 13-year, $325 million contract that will expire roughly when the now 25-year-old superstar turns 38, having forgone the opt-out clause at the six-year mark.

​I personally think that these contracts are ridiculous. The best part about baseball is being astonished when a big-name player gets traded across the country to a new team and a new division, and seeing just how versatile his talent really is. But, sadly, now that novelty was ripped away from us as team upon team is trying to forcibly sign lifetime players by throwing money at them.

​In an article on Yahoo! Sports, it references Stanton’s previous position on continuing his career with the Marlins during the season, and the outlook didn’t seem hopeful. Stanton noted that winning was among his highest priorities, and the team’s relative success during the year didn’t change the five years of losing he had suffered during his young career, as this season marks the first time in four years that the Marlins have not placed last in the NL East.

​We can see how these types of contracts backfire most clearly in the Yankees’ long-term contract with Alex Rodriguez, as more and more charges come out against the third basemen, making his position in the organization – and even the sport —questionable, thus causing the Yankees to lose more money than they assumed when they signed A-Rod in 2008 through 2017.

​Basically, I just do not think it’s going to work out, and I do not think teams should keep making these contracts.

​So, onward we go. As Yahoo! Sports writer Eric Edholm so eloquently states, “Week 11 in the NFL from now on shall be known as the week when participation became optional.” Credit given where credit is due.  I commend you, Eric, on your comedy revolving the current NFL drama queens.

​The Steelers cut running back LeGarrette Blount for walking off the field before the end of the team’s 27-24 victory over the Tennessee Titans on Monday night, due to his lack of carries, i.e. zero; and as a Steelers fan myself, I say, “Good riddance.”

​Blount didn’t start the season well for the Steelers, and I’m glad his career in Pittsburgh is coming to an end. If you cannot appreciate a fellow teammate’s monster game, as running back Le’Veon Bell had, in a major win at a crucial point in the season, then you don’t deserve to be a part of that team.

​In addition to Blount’s antics in week 11, San Francisco 49ers’ Ahmad Brooks benched himself, and Seattle Seahawks running back Marshawn Lynch decided for himself that the halftime team locker room meeting just wasn’t for him.

​In other similar news, the Cleveland Browns have released running back Ben Tate. Tate had previously stated his disapproval for losing playing time to fellow rookie running backs, so the Browns decided to agree with Tate’s statement that the running back lineup was too cluttered, and took to releasing one of them: this time, unfortunately for Tate, being himself.

​So, in conclusion to this rather disjointed post, players in all professional sports should remember that they are a part of a business, and that chose to have a career that revolves heavily around making decisions that are best for the organization and the team rather than the individuals. If you are unhappy that those decisions don’t involve you, then the only way to change that is to make a point to train harder and be better so that next time, they do choose you.

​And ultimately, remember where you came from. Whether it be Pop Warner football or Little League baseball, all athletes start with a dream to play professionally. And at that time, it wasn’t all about the money, so at what point did that all change?

Sarah Stigers believes that Marshawn Lynch should have had some skittles in the first half against Kansas City. And that you should continue to read new entries of Gossip Girl Sports every Wednesday.