The Daily Nexus
Swim and Dive
Swim Comes Up Empty Against Wyoming
November 17, 2014 at 5:00 am by Daniel Moebus-Bowles 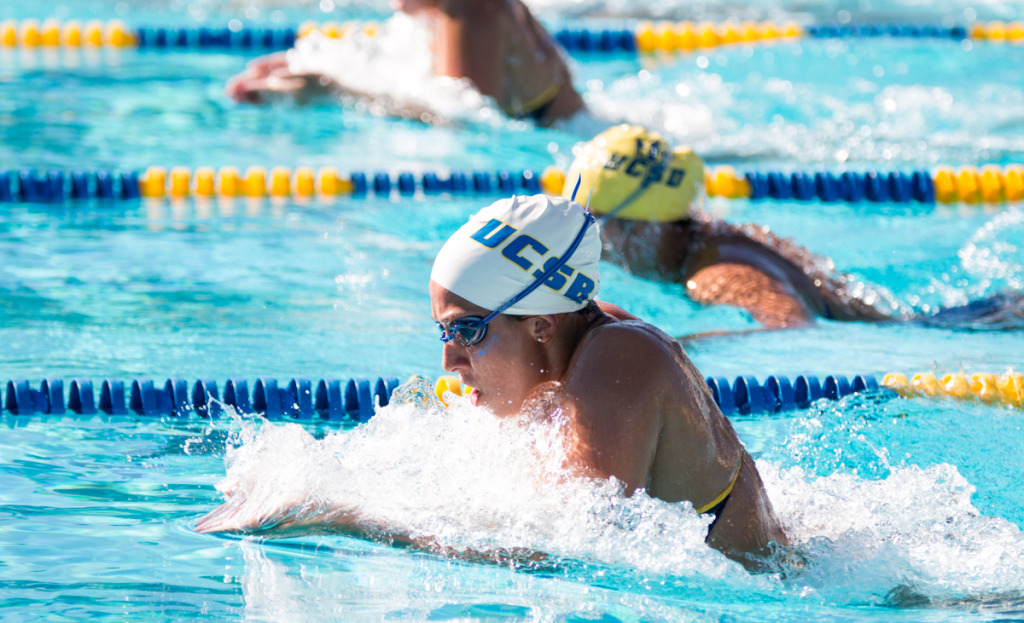 Santa Barbara waits until next year to compete in another duel meet. (Alex Gonzalez/Daily Nexus)

This past weekend, the UCSB men’s and women’s swim teams played host to the visiting Wyoming University in its last dual meet of the year. Both Gaucho teams were bested as the men lost 130-132 and the women by a score of 106-154.

With this meet in the books, the men move to an overall record of 2-2 and the women drop to 3-2.

The men’s team made for an exciting meet that came down to the last couple events as it only fell by two points. The usual leaders for Santa Barbara pushed their team to an opportunity for a win, but fell just short while still providing some proficient performances.

On the women’s side, the Gauchos decided to flaunt their dominance once again in the breaststroke events.

“[The breaststroke] is where we really have been able to handle teams so far this season,” Head Coach Gregg Wilson explained. “Some of our girls are really strong when it comes to those events.”

The Gauchos displayed exactly what Wilson was speaking of in the meet with Wyoming as they took first and second place in both of the breaststroke events. Senior Katie Records and junior Charis Hoppe took first and second in the 100-yard event with times of 1:03.62 and 1:05.45. Later in the afternoon, Records struck again in the 200-yard event with freshman Alyssa Shew taking silver, coming in at times of 2:18.68 and 2:21.83, respectively.

Along with Records, another Gaucho on the women’s side who swam with consistency was Lauren Vosseler. The junior took second place in both the 50-yard and 100-yard freestyle events, finishing with times of 24.04 and 52.85, respectively.

This dual meet was the last that the Gauchos will compete in until late January, but this does not mean that the team will not be in the pool. They prepare for an ultimate test this week when they head south to Los Angeles to compete in the Arena Invitational. The Invitational is a three-day swimming and diving competition that has been known to feature some familiar opponents of Santa Barbara, such as Cal Poly and the University of Hawaii.

Following this weekend of events, the Gaucho women will head to Austin, Texas to compete in another three-day competition known as the Texas Invitational.

The Arena Invitational is set to kick off this Friday afternoon at East Los Angeles College.