The Daily Nexus
Artsweek
Bananas, Art and the F-word: Guerilla Girls Come to UCSB
November 17, 2014 at 5:00 am by Chinelo Ufondu 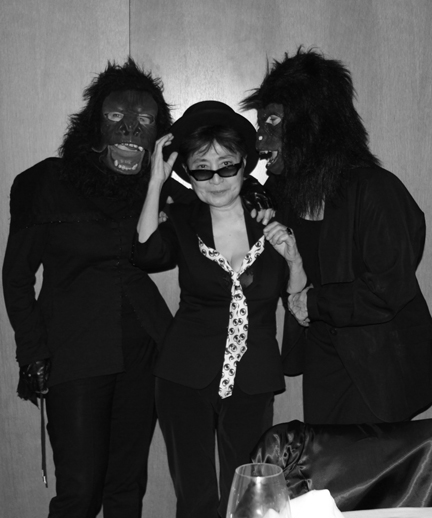 I have never walked into a lecture hall and not been bored by the very thought of it, until last Thursday. “Say the F-word,” was the greeting when I entered the Guerilla Girls presentation, an art colloquium put on by the UCSB Art Department. Not knowing what to expect, I was met with a blend of deep soul music, strobe lights filling every inch of the theatre and a collage of gorilla masked women on the screen in the front of me. I had a feeling it was going to be an eventful night.

To cover the basics of the Guerilla Girls: they are a masked feminist art troupe consisting of fifty members who are all anonymous. If ever asked about their identities, they assume the names of dead female artists. The hero of the night was Käthe Kollwitz, a German painter famous for her searing images of human tragedy.

And what is their message? “To be the conscience of the art world,” they state in unison, making the clear, unarguable point that women are underrepresented in the artistic community. Out of that spirit, the highly vocal, social-crime-fighting, vigilante, primate-masked, anonymous, but ever watchful (and score-keeping) feminist collective the Guerrilla Girls was born.

The Guerilla Girls have pointed out this imbalance since 1985 with their first demonstration on the streets of New York City. They covered the city with posters which questioned the minimal amount of women with one-person exhibitions in major museums of NYC. Plastering fliers in NYC is illegal, which is why they put on the masks – and they haven’t taken them off since.

For most around me, the presentation was mandatory for class, but for a few it had been on calendars for weeks. Even the curator herself, Jenalee Harmon, reminisced about first seeing the Guerilla Girls when she was an undergrad before finally introducing the pseudo-heroine Kollwitz who wasn’t anything less than mundane. Toting a handful of “feminist” bananas, the all black-clad “gorilla” proceeded to toss the fruit into the audience. I was lucky enough to have this snack fall into my lap, and I knew we were off to a good start.

The gorilla then went on to describe the misogynistic views of women from famous men such as Pythagoras and Martin Luther, her vocabulary alternating between “whore” and “bitch” before getting down to the major point of women in art. “Curators were bragging,” said Kollwitz. “They were bragging about how only men are doing work that’s worthwhile. Even apart from the cheese-eating misogyny monkeys, everybody, globally, is moving incredibly slowly on this; women artists working today still earn the most shaming fraction of what men earn.”

Their rabble-rousing efforts have proved to be anything less than effective. One such poster, created in 1989, famously revealed a disheartening statistic about the Metropolitan Museum of Art (and featured an illustrated body of Ingres’s Grande Odalisque collaged with a fierce gorilla head): “Do women have to be naked to get into the Met Museum? Less than 5% of the artists in the Modern Art sections are women, but 85% of the nudes are female.”

The feminist avenger rounded up her presentation with the nine commandments of being a Guerilla Girl: “One, be a loser. Two, be anonymous. Three, just do one thing, then another and another. Four, be crazy. Five, be an outsider. Six, make cheap art. Seven, give museums tough love. Eight, complain, complain, complain and, my personal favorite, nine, use the “f”-word, feminism.”

When the floor opened up for questions, the most obvious query that was on everyone’s mind arose: “Are there any Guerilla ‘Boys’?” The seasoned gorilla laughed it off. “Men have asked to join the cause and though there are transgender members, there are no biological male members. We have no opposition against male members as long as they’re okay with working long hours with no money or credit.”

The closing question also ended in a hoot: “What perpetuates the notion that the idea of feminism is synonymous with man hate?” With a presumably straight face (she was masked — this reporter had to use an imagination), Kollwitz curtly replied “Fox News bullshit.”

With the presentation finally over and my (half-eaten) feminist banana in hand, I went up to Kollwitz to laud her for her appearance. I, for one, never truly considered myself as a feminist, but after seeing what the Guerilla Girls stood for I had to ask what it took to become a one of these modern day superhero. “We are all born a Guerilla Girl, it’s just how you express it,” said Kollwitz. “Some have to wear masks, but some are heroes all on their own. It’s what you make of it. So use the “f”-word. Make it the “f”-word of the future.”

And with that, I would like to conclude this with one word: Feminism.