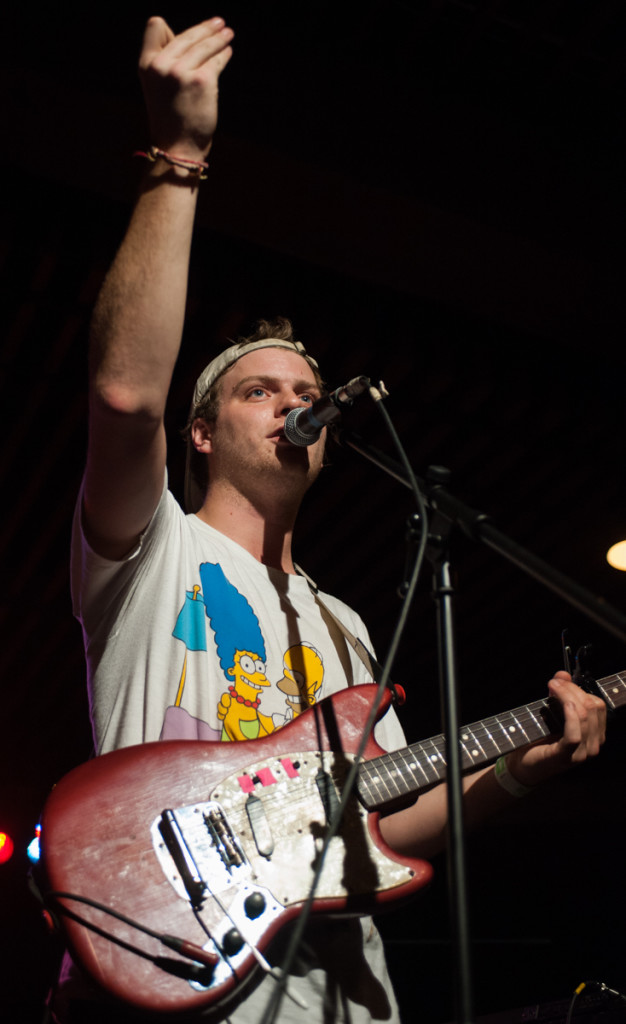 Musician Mac DeMarco was detained in the Hub on Friday for crowd-surfing and climbing the Hub’s ceiling rafters. (Kenneth Song/Daily Nexus)

Indie-rock singer/songwriter Mac DeMarco was briefly detained after climbing a rafter hanging on the ceiling in the middle of The Hub toward the end of his show Friday night.

UCSB Police Department Lieutenant Mark Signa said DeMarco was detained, but not arrested for climbing up to the second floor of The Hub after playing for a crowd of 800 students.

“DeMarco was reportedly climbing the beams and supports from the first floor to the second floor. I cannot positively say he was crowd surfing,” Signa said.

According to Signa, DeMarco did not break any laws, but broke event-specific rules.

“It’s not a law that was initially violated, but event rules prohibit moshing, crowd surfing or climbing up the supports,” Signa said. “Violations result in a person being asked to leave the event.”

Signa said police were taking DeMarco out of The Hub when he ran back to the stage, which led to him being detained.

According to Signa, DeMarco was contacted after climbing up to the second floor and was being escorted out when he ran from the police and back into the crowd downstairs. DeMarco then climbed on to the stage and officers escorted him off the stage and outside, Signa said.

“It was outside that they learned he was the performer and advised to not encourage unsafe behavior and released,” Signa said. “He was not arrested or charged, just detained due to running from the police.”

According to Gabriel Isaacson, first year Santa Barbara City College communication student who has seen DeMarco several times, the artist usually jumps into the crowd and crowd surfs during his last song.

“Everyone was getting a little crazy and ripping off his shoes and pulling at him and stuff,” Isaacson said. “He scaled up one of the beams where people were crowded up and climbed on to the balcony above, and everyone was like ‘Oh, where’d he go?’ and then he popped back on stage and the cops escorted him off.”

Isaacson also said she thought the police response wasn’t necessary and was “kind of ridiculous” considering DeMarco’s behavior at past performances.

“I’ve seen him live a lot and that’s just what he does, it’s just a part of his show,” Isaacson said. “He has the whole stage presence, it just adds to the whole concert. So I thought it was a little extreme.”