The Daily Nexus
Music
Cirque de Freq Proves Itself as an Antidote from I.V. Halloween
November 16, 2014 at 2:18 pm by Adam De Gree 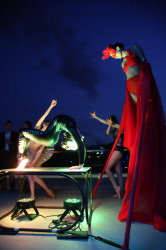 On Halloween night, thousands of students fled Isla Vista to get their kicks in places where noise ordinances, Orwellian police density and the sort of people that stay in Isla Vista for Halloween are a distant memory. One such place was L.A.’s Club Nokia, where the DoLab, a production company responsible for the immensely popular Lightning in a Bottle festival which provides some of the strangest experiences this side of Burning Man, hosted experimental electronic artists alongside performance troupe Quixotic for an event aptly billed as Cirque du Freq. The night was a huge success, free of the rain and disillusionment that plagued Del Playa Drive.

The event began promptly at 9 p.m. and ran past 2 a.m., providing guests with hours of warm sonic enjoyment. The main stage hosted an impressive visual setup alongside artists including the trumpet- and flute-playing Russ Liquid, glitch hop pioneer Tipper, and headliners Quixotic. Upstairs, a comfortable lounge setup provided space for hip hop beat producers ChrisB., Goldrush and others from the Headtron label.

Along the walls, vendors selling gear appealing to the transformational festival crowd (psychedelic toys, artwork and clothing including those pants that sorority girls suddenly love) set up shop next to massage booths. It was a perfect blend of LA nightlife and what you’d expect to stumble across at 3 a.m. at any respectable festival. 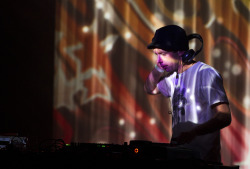 As for the music, well, it was weird. Russ Liquid dropped some heavily syncopated beat music layered with trippy synths and his live brass work. It’s the sort of stuff that can’t really be explained to those unfamiliar with the scene, but the feeling it inspires is akin to wandering through a jungle at night while an earthquake, tsunami and volcano all coincide, and the water and lava glow with a strange bioluminescence. Listen to “Feral Cat” if you want more of a hint.

Tipper has laid the groundwork for a number of genres throughout his influential career. Heunderwent open-heart surgery last year, but that doesn’t seem to have affected his touring schedule, as he headlined Santa Barbara’s own Lucidity Festival last April. The set he played on Friday was a mix of jungle-informed breaks, steady scratching and heavily filtered vocals that lent a Shpongle-y edge to everything. It was at once aggressive and intricate, a combination rarely achieved outside of drum and bass.

Finally, Quixotic blew the already breathless crowd — which was ragged after the onslaught of bass — away with a multimedia presentation of artistic skill. Live and electronic elements contributed to the soundscapes while dancers performed on stage and suspended by aerial silks. It was a powerful spectacle, full of archetypal themes and breathtaking talent.

All told, the event was the perfect antidote to the adolescent attempts of the masses of Isla Vista, one that sets a high standard for next year.