The Daily Nexus
Feature
Public Forum Discusses Options for I.V.
November 14, 2014 at 7:17 am by Staff Report 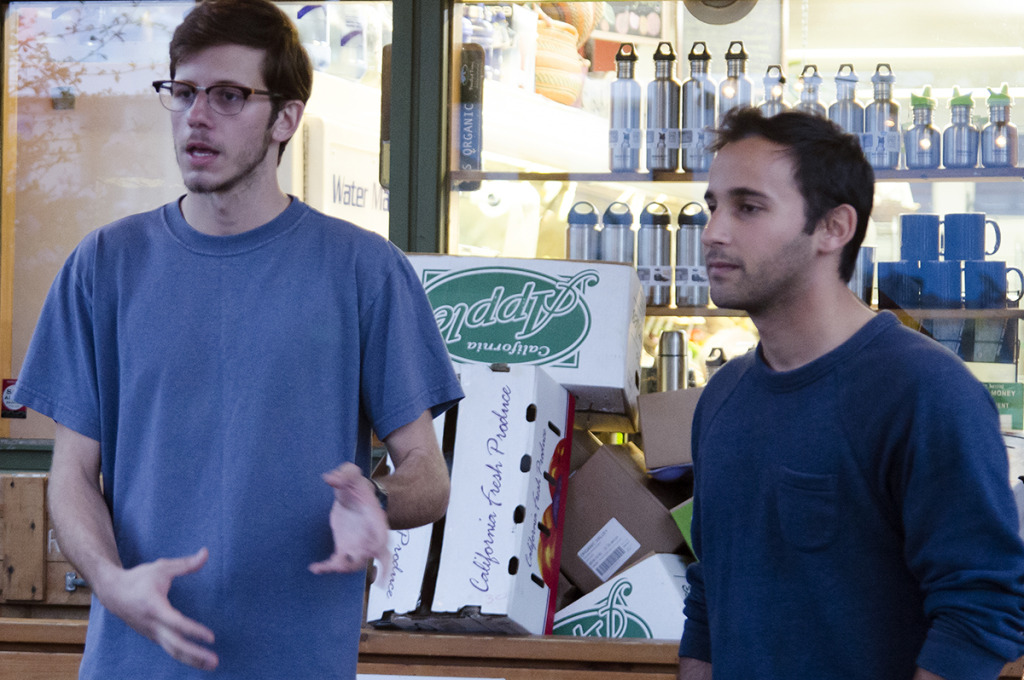 AS EVPLA-elect Cameron Schunk and SBCC Trustee-elect Jonathan Abboud speak to the audience in a public forum at the Isla Vista Food Co-op. (Alex Nagase/Daily Nexus)

Schunk and Abboud have been working throughout the year to bring greater autonomy to I.V. and held yesterday’s meeting in order to incorporate resident feedback into further action for establishing a form of I.V. self-governance. The meeting was originally to be held at the I.V. Food Co-Op but changed location due to rainy weather.

During the meeting, forum-attendees discussed the possibility of creating an Area Planning Commission with jurisdiction over planning in I.V., the university’s plans to potentially provide housing for staff in I.V. and the possible creation of an elected “police collaborative board,” responsible for meeting with local law enforcement periodically to discuss law enforcement-related issues in I.V.

In regard to the proposed Area Planning Commission, — which would function through the County Board of Supervisors and specialized Community Services District (CSD), if the Special District is approved and passed — Abboud said the commission would approve building projects and their regulations as either a potential function of the CSD or possibly the CSD itself.

According to Schunk, I.V.’s historical divide between students and non-student residents has caused a disconnect that has led to I.V. becoming an unsafe neighborhood that disenfranchises many residents. With an Area Planning Commission, housing in I.V. would be more subject to housing and safety regulations than is the case currently, according to Schunk.

Amid discussion regarding the potentiality of I.V. self-governance in the form of a Community Services District (CSD) brand of governance, a Municipal Advisory Council (MAC), cityhood, or other options, Abboud and Schunk expressed their support for a CSD, which would levy a utility users tax onto residents in order to raise funding for implementation of local projects.

Freeman, however, said he felt that current and previous self-governance discussions have been unfairly centered on the establishment of a CSD and that more education about possible cityhood for I.V. as well as other forms of self-governance, should be publicized to I.V. residents.

“A CSD is not able to pass laws. It is only able to provide services,” Freeman said. “All the things that regularly plague I.V. require legislation to fix, not services. The things that CSD can provide don’t go far enough.”

The forum concluded with attendees agreeing that information about I.V. self-governance and its related meetings should be better disseminated and advertised to residents, such as students and Latino families, via back-to-back forums held in areas residents feel comfortable meeting. The next I.V. self-governance town hall meeting will be hosted shortly after Schunk takes office.

[Correction 11/17/14: An earlier version of this article stated that, during the Nov 14 meeting, “attendees discussed the possibility of creating an Area Planning Committee to allow affordable housing options in I.V. to non-students— primarily university staff” when in fact the Area Planning Commission only gives jurisdiction over planning in I.V., not over what kind of housing the university provides. Also, the plan to provide housing for UCSB staff in I.V. is not related to self-governance and is in fact solely a function and idea of the University.

In addition, an earlier version of this article stated that “Abboud said the [Area Planning Committee]’s potential implementation would likely be through the university and would be responsible for infrastructure maintenance and the distribution of student and non-student residents throughout I.V.” when in fact the Area Planning Commission would function through the County Board of Supervisors and potential future Special District and would not be responsible for infrastructure maintenance. It also has nothing to do with the university.

The Daily Nexus regrets these errors.]

Jay, if you want to read up on other possible governance options for IV, you should read the Santa Barbara County Local Agency Formation Commission’s (CA State Agency) commissioned report titled “Local Governance Options for Isla Vista/UCSB,” linked here: http://www.sblafco.org/docs/10027iv_rpt3.pdf If you want to find out more about cityhood, you should visit the Isla Vista Archives in the UCSB Library Special Collections and read up on past attempts to create a city. Here is the catalog for that collection: http://pdf.oac.cdlib.org/pdf/ucsb/spcoll/ivarch.pdf If you are interested in finding out more about Municipal Advisory Councils, you should read here: http://opr.ca.gov/docs/Municipal_Advisory_Councils.pdf If you are… Read more »